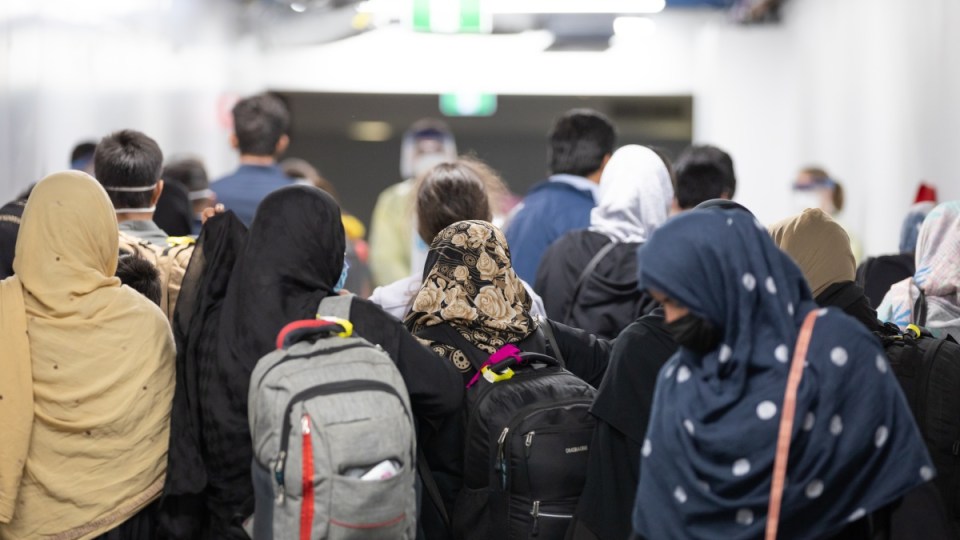 A report has urged an overhaul of Australian visa processes for refugees fleeing from the Taliban. Photo: AAP

The Department of Home Affairs has been urged to improve its processes for visa applicants from Afghanistan following the country’s takeover by the Taliban.

A parliamentary report on Australia’s involvement in Afghanistan called on the department to boost their communication with visa applicants, including sending acknowledgements to all who had applied and publish more detail about the visa process.

Home Affairs were also urged to issue more emergency visas to family members of evacuees in Australia to ensure family unity is preserved when applications were made for permanent visas.

The report issued six recommendations, among them that the federal government enhance its comprehensive settlement planning for the ongoing intake of Afghan refugees.

The Senate inquiry was set up since the Taliban takeover in Afghanistan and ensuing refugee crisis.

The final report, released on Tuesday, revealed the federal government issued more than 6000 emergency visas in 2021 to refugees fleeing Afghanistan.

Of the 6043 visas issued to those looking to flee the country, 4328 of them arrived in Australia.

According to the report, there were 517 Afghans who had a valid visa but had not yet travelled to Australia, while 1398 had their visa lapse without entering Australia.

The visas had lapsed due to a decision in November not to renew the emergency visas of those who were outside Australia at the time.

“This means that these individuals, who were deemed worthy of evacuation to Australia … have lost the ability to travel to Australia on an emergency visa,” the report said.

“(The individuals) now must lodge applications in other general visa categories, all of which are associated with lengthy wait times.”

While visas applications from those fleeing Ukraine following the Russian invasion have been given the highest priority, Home Affairs has been urged this should not come at the expense of Afghans.

“Home Affairs should urgently increase its processing capacity and resourcing so as to effectively deal with both crises with the urgency required,” the report recommended.

The report also found humanitarian settlement program support had been given to more than 5000 Afghan evacuees since August last year.

“This experience highlights structural issues with the HSP program and contract that need to be addressed,” the report said.

“The HSP’s use in emergency settlement contexts need to be clarified to assist in any future situations similar to the Afghanistan crisis.”

In additional comments in the report, Greens Senator Janet Rice urged the government to apologise to victims of Australian war crimes in Afghanistan during the 20-year military involvement.

Senator Rice also called for decisions to deploy members of the ADF beyond Australia be decided by the parliament as a whole and not the executive.

“Australia also has a moral obligation to those in Afghanistan whose lives have been devastated by the invasion and poorly managed withdrawal,” she said.