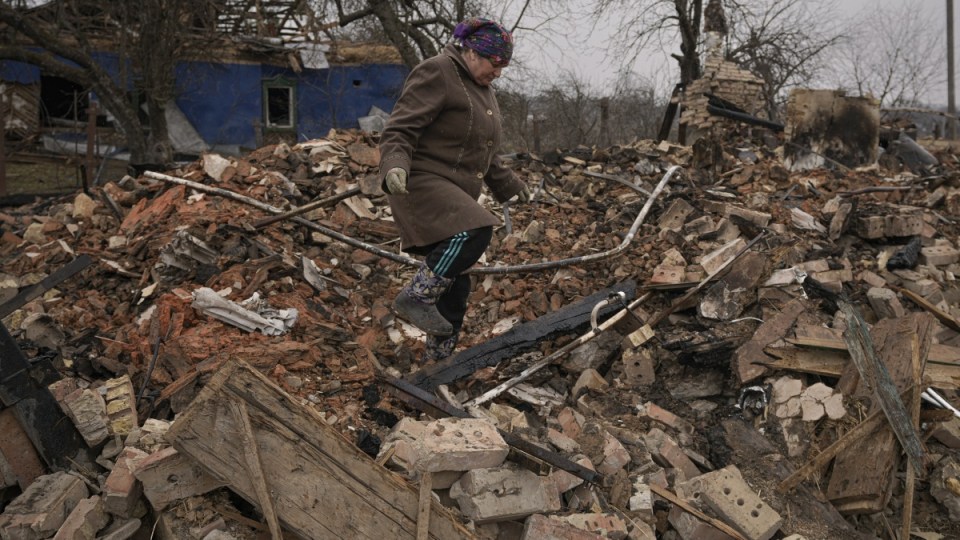 Russia's invasion has driven about a quarter of Ukrainians from their homes. Photo: AP

Ukrainian forces are preparing for new Russian attacks in the south-east region where Moscow’s guns are now trained after its assault on the capital Kyiv was repelled, President Volodymyr Zelenskiy says.

Five weeks into an invasion that has blasted cities into wastelands and created more than four million refugees, US and European officials said Russian president Vladimir Putin was misled by his generals about the dire performance of Russia’s military.

The International Committee of the Red Cross (ICRC) said it was bringing a convoy of aid to reach the besieged Black Sea port of Mariupol, where tens of thousands of people have been trapped for weeks under bombardment without food, water or heat.

In an early morning video address, Mr Zelenskiy said Russian troop movements away from Kyiv and the northern city of Chernihiv were “the consequence of our defenders’ work”.

Ukraine was seeing “a build-up of Russian forces for new strikes on the Donbas and we are preparing for that,” he said, referring to the south-eastern region Russia demands Ukraine cede to separatists, where Mariupol is the main port.

Tough resistance by Ukrainian forces has so far prevented Russia from capturing any major city, including the capital Kyiv, which it assaulted with armoured columns from the northwest and east.

Moscow says it is now focusing on “liberating” Donbas.

Mariupol, once a city of 400,000 people, has been destroyed by four weeks of relentless bombardment and siege. The United Nations believes thousands of people have died there.

Previous attempts to bring aid into besieged parts the city have failed and civilians have only been able to escape if they have cars.

Ukraine said 45 buses were on their way on Thursday and the ICRC said it would evacuate civilians from Friday if the warring parties agreed on safe passage.

“It’s desperately important that this operation takes place. The lives of tens of thousands of people in Mariupol depend on it,” ICRC spokesperson Ewan Watson said in Geneva.

In a part of Mariupol now held by Russia, people occasionally climbed out of cellars to appear, ghostlike, among the ruins.

“Our friend. March 16. Driving in a car. A bullet hit him in the throat. He was dead in five minutes,” said Pavel, placing a bowl and spoon as a tribute on a makeshift grave, in a patch of grass outside a wrecked apartment block, marked with a plain wooden cross. “I was in the car. I brought him home.”

Russia declared on Monday it was scaling back its offensive near the capital and Chernihiv in the north, in what it called trust-building for peace talks.

Western countries say the invasion was an unprovoked war of aggression, that Russia’s true aim was to swiftly topple the government in Kyiv, and that its failure has been a strategic catastrophe, bringing economic ruin and diplomatic isolation.

US officials have declassified intelligence which they said showed a rift between Mr Putin and top advisers who failed to warn him of the poor performance of his military or the economic impact of Western sanctions.

“We have information that Putin felt misled by the Russian military, which has resulted in persistent tension between Putin and his military leadership,” Kate Bedingfield, White House communications director, told reporters during a press briefing on Wednesday.

“We believe that Putin is being misinformed by his advisers about how badly the Russian military is performing and how the Russian economy is being crippled by sanctions, because his senior advisers are too afraid to tell him the truth.”

Western sanctions imposed on Russia as punishment for its invasion have largely isolated its economy from world trade, but Moscow is still the biggest supplier of oil and gas to Europe.

The United States is considering releasing up to 180 million barrels of oil over several months from its Strategic Petroleum Reserves (SPR) to ease prices, two US sources said.