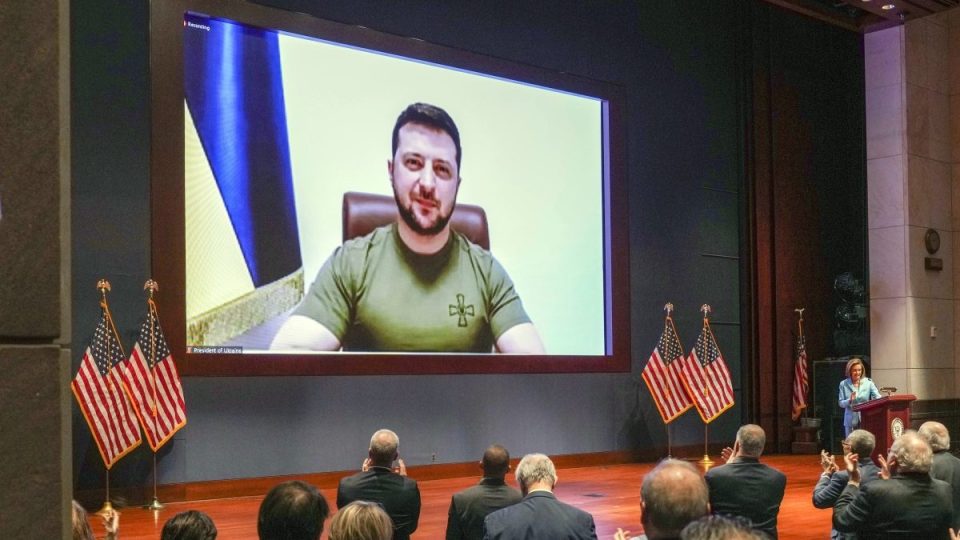 The address will take place in the House of Representatives at 5.30pm (AEDT) via video link.

Senators will be invited to the lower house to listen to his address.

But questions are being raised about the timing of the speech, which is just two hours before Mr Albanese is to deliver his budget reply speech.

Mr Zelensky has addressed numerous parliaments as he implores the West to take further action to combat Russian aggression more than a month on from the Kremlin’s invasion.

He recently accused the West of cowardice as his country fights to stave off Russia’s invading troops and he pleaded for more fighter jets and tanks to defend his country.

When asked by Jacqui Lambie in question time if Mr Putin was a war criminal, Senator Payne agreed the targeting of civilians “indicates criminal behaviour” but stopped short of using the label.

“The Australian government has taken the strongest possible approach to our sanctions listing,” she responded.

Senator Payne’s comments came just hours after she named Russian individuals complicit in the corruption uncovered by Sergei Magnitsky as the first to be targeted under Australia’s sanctions act which bears the whistleblower’s name.

Fourteen Russians responsible for serious corruption and a further 25 Russians who aided and abetted Mr Magnitsky’s abuse and death will face asset freezes and travel bans in the first tranche of sanctions under the act.

The laws – named after Mr Magnitsky who died in a Moscow jail after accusing Russian officials of tax fraud – allow the government to target individuals who perpetrate human rights abuses and conduct egregious acts of international concern.

Senator Payne said the targeted sanctions would ban the abusers from using Australia as a haven after being locked out of like-minded countries and their financial systems.

“Mr Magnitsky’s case inspired an international movement of sanctions laws to hold those responsible for his death to account, and to enable sanctions to be applied to other perpetrators of serious human rights violations and abuses, wherever they occur in the world,” she said.

“This is the first of what will be ongoing sanctions using the Magnitsky-style reforms we passed in December.”

“We condemn Russia’s abhorrent actions in the strongest, strongest possible terms and those of their leader President Putin,” he said.

“We’re doing all in our power to ensure that Putin’s Russia pays the highest possible price for their illegal invasion.”

Mr Albanese said Russia’s attempt to “divide” Western nations had only served to bring them closer together.

“Vladimir Putin must pay a heavy price for what he has done, in his attempt to so violently subdue Ukraine,” he said.

“He is turning Russia into an international pariah and robbing his own people of their rightful future.”