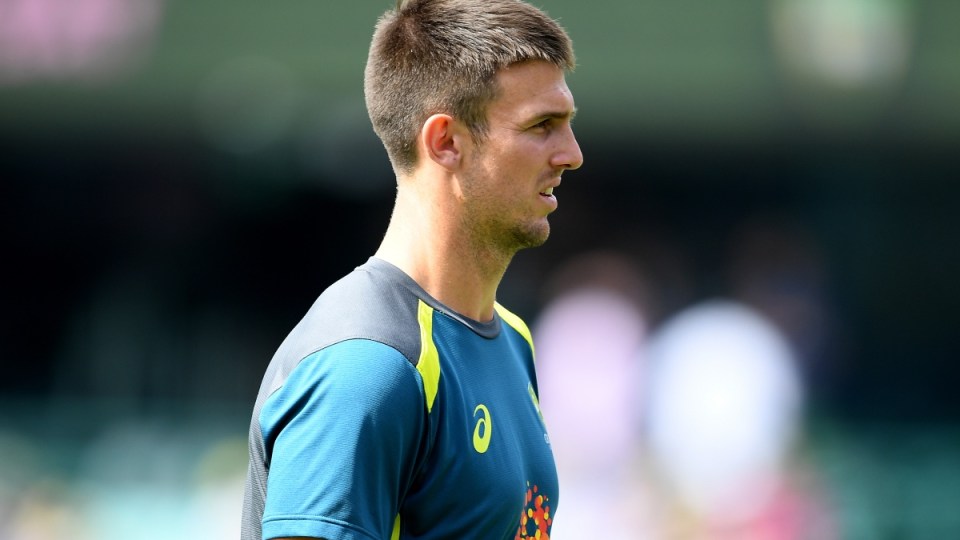 Mitch Marsh has a hip flexor injury and is expected to miss Australia's ODI series in Pakistan. Photo: AAP

Australia’s depleted stocks have taken a further hit ahead of the ODI series against Pakistan after T20 World Cup hero Mitchell Marsh was struck down by a hip injury.

Marsh suffered the setback while fielding during a training drill.

Scans confirmed the injury was a low-grade hip flexor strain, but the tourists remain hopeful Marsh can play some part in the series, which begins on Tuesday.

Captain Aaron Finch had earlier said he expected Marsh to miss all three matches, with Cameron Green to fill the void.

Marsh’s injury comes at a bad time, given that stars Pat Cummins, Mitchell Starc, Josh Hazlewood, and David Warner are all being rested from the white-ball component of the Pakistan tour.

Steve Smith was ruled out at the weekend due to an elbow injury, while Glenn Maxwell is another big name that is missing.

“I don’t think he’ll be available for this series based on how he was feeling yesterday,” Finch said of Marsh.

“He sustained that yesterday in a fielding drill. It was a high-intensity, lateral movement drill.

“He bent down to pick it up one-handed and went to throw and felt a twinge in his hip flexor.”

The preparations for the ODI series began with an extensive three-hour long practice session at the Gaddafi Stadium, Lahore. #BoysReadyHain I #PAKvAUS pic.twitter.com/3PsuTX6D7O

In a further blow for Australia, Josh Inglis has tested positive for COVID-19.

The wicketkeeper-batter will isolate for five days before returning to the squad.

Queensland batter Matthew Renshaw will join the team following three days’ isolation but Marsh’s absence has opened the door for Green to showcase his talent.

Green is flourishing on the Test arena, but his one and only ODI appearance came in December, 2020 when he scored 21 off 27 balls and took 0-27 off four overs in a 13-run loss to India.

“He will probably bat in that middle order,” Finch said of the 22-year-old.

“We’re seeing that he’s a super-talented cricketer. He’s someone who has been quite consistent in his Test career so far.

“His impact with the bat and bat can’t be underestimated. I’m really excited for Cam to get that opportunity.”

Ben McDermott, who has just two ODIs to his name, could be given another crack at the top of the order in the absence of Warner.

And Smith’s exit could open the door for Marnus Labuschagne to play his first ODI since 2020.

“Marnus is someone who brings a lot to the team, particularly in these conditions with his leg breaks, and his batting speaks for itself,” Finch said.

“He’s a wonderful player and continues to get better in ODI cricket and T20 cricket in particular.

“The fact he’s bowling more and more is impressive.

“I don’t know if anyone has seen the footage of our training yesterday, but Marnus bowled a lot and carried on like an idiot every time he got a wicket, which was quite good fun.

“He’s someone who is so dynamic around the group, brilliant in the group.

“Just the whole package he brings is outstanding, and I’m really looking forward to seeing him play in these conditions again.”