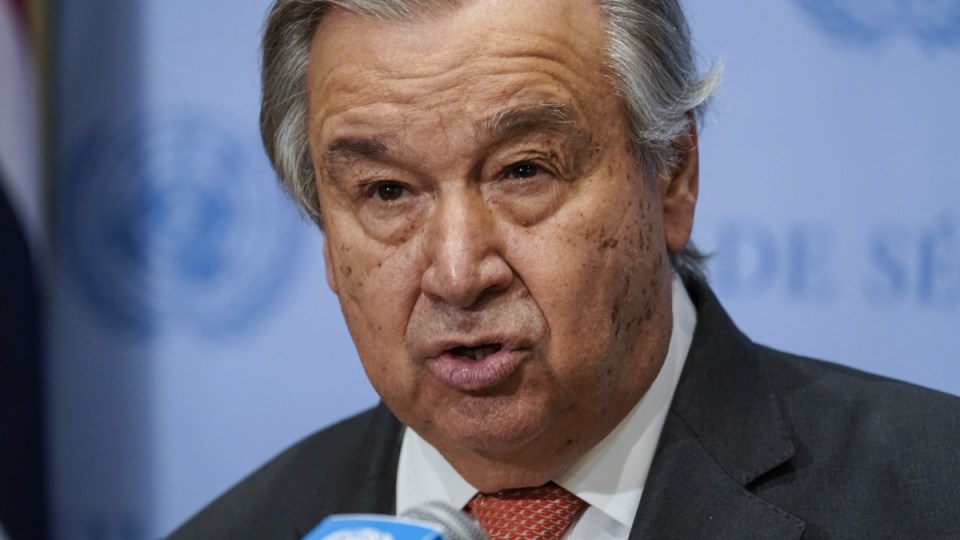 The United Nations secretary-general has called Australia a “holdout” after Scott Morrison refused to strengthen the nation’s 2030 emissions reduction target.

António Guterres has used an address to a sustainability summit to take an extraordinary public swipe at Australia’s climate change efforts.

“A growing number of G20 developed economies have announced meaningful emissions reductions by 2030 – with a handful of holdouts, such as Australia,” he said.

He said the Paris climate pact’s ambition of limiting global warming to 1.5 degrees Celsius was “on life support” but there was still something that could save it.

“Keeping 1.5 alive requires a 45 per cent reduction in global emissions by 2030 and carbon neutrality by mid-century. That problem was not solved in Glasgow,” the UN chief said.

The Prime Minister went to Glasgow last year without the two big things countries were asked for: Stronger 2030 targets, and a rapid phase out of coal.

Mr Morrison instead stuck to a six-year-old promise to cut emissions by 26 to 28 per cent cut by 2030, but did say Australia would probably reach 35 per cent by then.

He also refused to commit to an accelerated phase out of coal.

His plan to achieve net-zero emissions by 2050 relies on a technology-led economic evolution to cut emissions, capture and store them, or offset them, while allowing coal and gas exports to continue as long as there is demand.

Mr Guterres implored all G20 governments to dismantle their domestic coal infrastructure, with full phase out by 2030 for OECD countries, and 2040 for all others.

He called coal a “stupid investment” that would lead to billions in stranded assets.

Simon Bradshaw, head of research at the Climate Council, said the UN chief’s direct and veiled attacks on Australia’s climate policies were striking.

“It’s very unusual for the UN secretary-general to call out any country, specifically. I don’t recall a time when this has happened. It’s striking to see,” he said.

“What it indicates is that we’re going to keep seeing that pressure on Australia until we step up. We’re still the only one of those big developed countries that hasn’t significantly increased its commitments for this decade.”

Imogen Zethoven sits on the Reef 2050 Advisory Committee, where she represents the Queensland Conservation Council.

On Tuesday she’ll address a UN monitoring mission that is in Australia to evaluate federal government efforts to protect the Great Barrier Reef from climate change and other threats.

“The Morrison government should be shamed into action by this comment by the UN secretary-general,” she said.

She said the influence the coal and gas industries have over Australia’s climate policies was disturbing.

“They are running our climate policy and it’s at the expense of the Great Barrier Reef, other vulnerable ecosystems, communities and future generations of Australians, including quiet Australians.”

The Prime Minister did not respond to requests for comment.

A spokesperson for Emissions Reduction Minister Angus Taylor said Australia had reduced emissions faster than 15 members of the G20.

“We have a real plan to deliver on our commitments, one that relies on technology not taxes,” he said.

“We won’t sacrifice our traditional industries – and the jobs and communities they support – at the altar of emissions reduction.”

He said those industries and their workers would have an important role in the decades ahead.

UN chief singles out Australia as ‘holdout’ on climate action