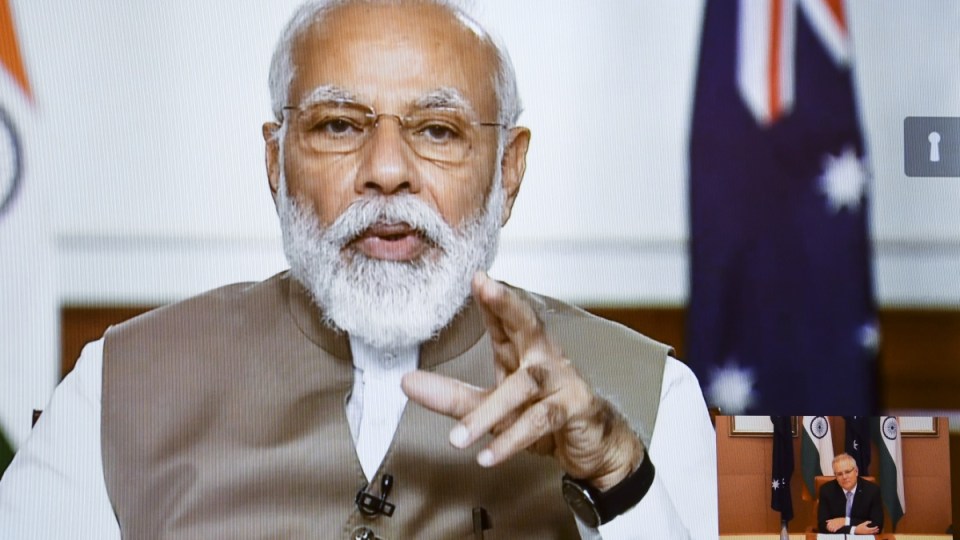 Australia is expected to commit to a landmark investment package in India following a virtual summit between the nations’ leaders on Monday.

The package – worth an expected $280 million – has been described as the largest-ever investment by an Australian government in India.

It will include sharing of renewable energy technology, defence and space co-operation and a new Centre for Australia-India Relations.

In his opening remarks at the summit Mr Morrison said the initiatives in the deal will build on India and Australia’s foundation in the post-pandemic world.

He said co-operation on science, technology, energy, and critical minerals and rare earths will unlock new opportunities for the economies of both nations.

“We’ve made great progress in defence, maritime co-operation, science, technology, clean energy as well, which is something I know Australia can work together closely with India on,” he said.

Prime Minister Modi said Australia and India must have better co-operation when it came to cyber space and emerging technologies.

“As countries that share similar values, it is our responsibility to adopt appropriate global standards,” he said in his opening remarks.

The return of 29 significant Indian artefacts from the National Gallery of Australia drew thanks from Mr Modi.

“You have given back these artefacts to us and now we can return them to the places where they belong,” he said.

Scholarships and partnerships will be offered to boost cultural, business and institutional ties.

Work will also begin on a new mobility agreement to free up travel access.

A taskforce will start work on a plan for joint recognition of educational, trade and professional qualifications.

Russia’s invasion of Ukraine was also discussed at the summit.

India, which rounds off the Quad security partnership alongside Australia, the United States and Japan, is the only Quad nation not yet condemning President Putin’s actions.

Mr Morrison says it is important to discuss the implications of the situation in Ukraine on the Indo-Pacific region which Australia and India are part of.

“Co-operation between like-minded liberal democracies is key to an open, inclusive, resilient and prosperous Indo-Pacific,” he said.

New Delhi is walking a fine line as Russia provides it with a large amount of arms.

But the timidity has raised eyebrows among Western allies including the United States and United Kingdom who want a more resolute stance.

Reuters has reported India may be willing to buy Russian crude oil and other commodities at a discounted price as sanctions continue to tighten around Moscow.

India relies heavily on the Kremlin for weaponry and armaments and about 70 per cent of its arsenal is Russian made.

Trade Minister Dan Tehan will on Tuesday unveil an update to the Australia-India Economic Strategy to take into account changes in the global environment and Indian economic reform, which will set out a five-year action plan.

The strategy update involved consultations with more than 600 businesses across the two nations.

It was initially anticipated a free trade agreement would be inked following the virtual summit on Monday, but negotiations remain ongoing.

Officials are hoping to have the deal completed by the end of the month before the federal government enters caretaker mode once an election is called.

The latest an election can be called and a caretaker period begins is mid-April, with polling day needing to be held by May 21.

The virtual summit comes two years after a similar meeting in which Australia and India elevated their relationship to become comprehensive strategic partners.