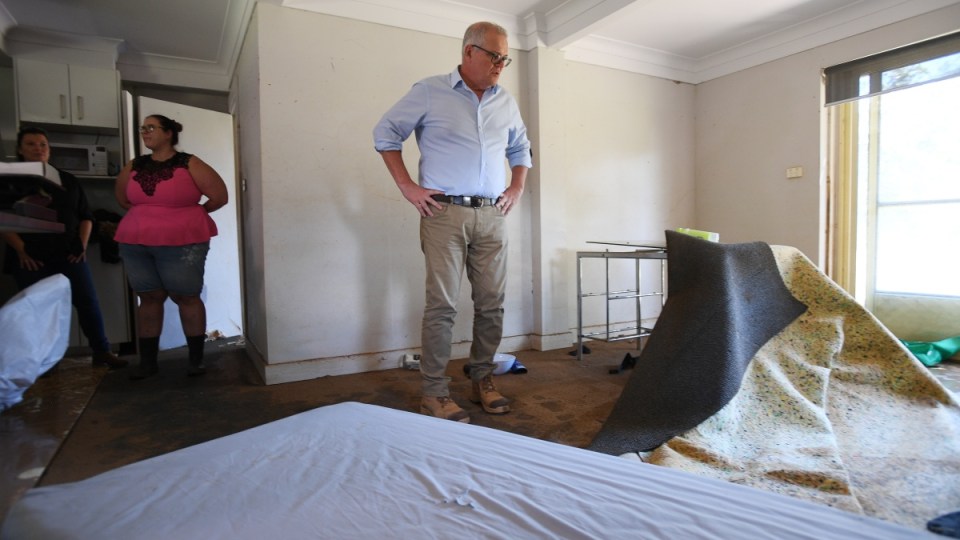 More than 100 mobile home units are on their way to flood-ravaged communities in NSW, as the emergency services minister pledged “unprecedented resources” to help with the clean-up.

Prime Minister Scott Morrison, who toured the flooded Windsor region northwest of Sydney on Saturday, said 20 similar units had already been set up across Lismore in the north of the state.

It is estimated two-in-three damaged homes in that region will need to be demolished or undergo substantial repairs after the severe floods and storms this month.

“It’s going to be a long road back,” Mr Morrison said on Saturday.

The support came after a national emergency was declared in NSW late on Friday, triggering additional resources for flooded areas.

The declaration will last three months and allow the federal government to access stockpiled resources and remove red tape around welfare support.

Mr Morrison said Queensland Premier Annastacia Palaszczuk had knocked back a similar offer for her state, with Ms Palaszczuk saying on Thursday help had been needed a week earlier.

Assistance has also been extended to a further 12 local government areas in NSW.

The support will be provided through the jointly funded Commonwealth-State Disaster Recovery Funding Arrangements, with some regions remaining at emergency level despite waters receding in other parts of the state.

“The immense scale of the flooding is unprecedented and we are working closely with the Commonwealth to put equally unprecedented resources into the significant clean-up and long-term recovery effort,” Ms Cooke said.

Premier Dominic Perrottet said the focus in the Northern Rivers remained on cleaning up and finding housing for displaced residents.

The Insurance Council of Australia estimates 126,511 claims across Queensland and NSW would cost insurers $1.89 billion but concedes further claims are likely.

With the clean-up under way in western Sydney, residents are being advised not to travel there or to the Blue Mountains this weekend.

Elsewhere more than 100 workers are assessing damage to the state’s roads.

“The exceedingly heavy rain created countless mudslides and landslips across the state, and many of these affected regional roads, along with flooding and other debris,” Transport for NSW customer co-ordination executive director Roger Weeks said.

It could take some time for permanent fixes to be in place.

NSWTrainlink chief executive Dale Merrick said all major regional lines out of Sydney had been damaged by heavy rain and landslips.

Services are expected to be disrupted for the next week at least.