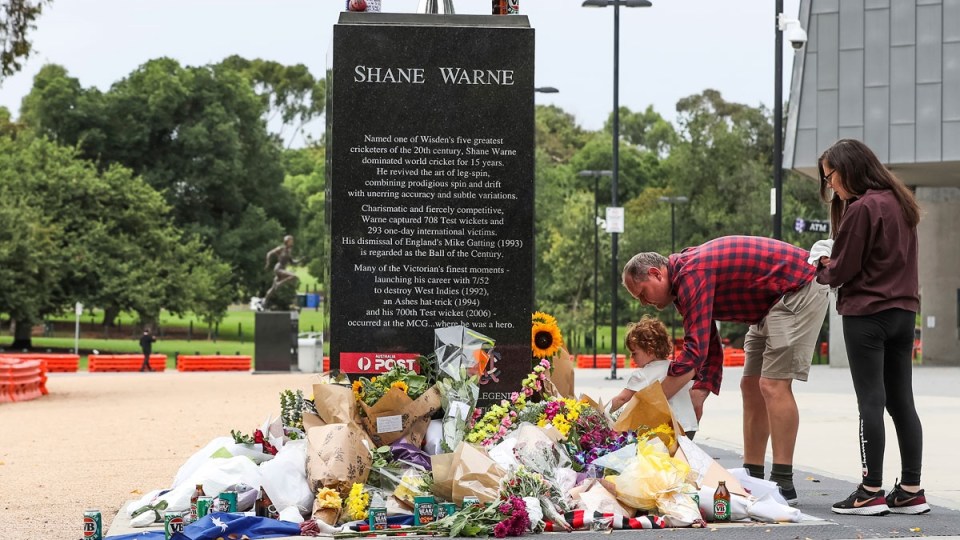 Fans turned Warne's statue at the MCG into a shrine. Photo: Getty

Shane Warne is on his way home.

The 52-year-old died from a suspected heart attack last Friday, sparking widespread grief as fans mourned the loss of one of the world’s best-ever cricket players.

On Thursday, Warne coffin – draped in the Australian flag – was loaded onto a private Dassault Falcon 7X in the Thai capital Bangkok.

It left for Australia at 8.25am local time, and is due to land in Melbourne early on Thursday night.

Following his death on the Thai resort island of Koh Samui on Friday, Warne’s body was taken by ferry to the mainland city of Surat Thani, and then on to Bangkok.

Warne’s family has accepted the government’s offer of a state memorial service. It will follow a private family funeral and will be held at the Melbourne Cricket Ground on March 30.

Celebrities among Warne’s wide circle of friends – including Ed Sheeran, Hugh Jackman, and former fiancee Liz Hurley – are among those expected to join up to to 100,000 others at the MCG.

The MCG was the stage of the leg spinner’s famous Ashes hat-trick in 1994 and 700th Test wicket on Boxing Day in 2006, his final series before he retired from international cricket.

The stadium is across town from Upper Ferntree Gully, the outer Melbourne suburb where Warne was born.

Warne’s family issued a statement on Monday night describing the night of his death as the beginning of “a never-ending nightmare”.

“Looking to a future without Shane is inconceivable,” his father and mother, Keith and Brigitte said.

“Hopefully the mountain of happy memories we all have will help us cope with our ongoing grief.”

Warne’s son Jackson wrote: “To my brother, my best friend, to my Dad, I love you so much. I don’t think anything is ever going to fill the void you have left in my heart.”

Warne’s youngest daughter Summer said she wished she could have hugged him “tighter in what I didn’t know were my final moments”.

Eldest daughter Brooke said she loved him “to infinity and back” and would miss him forever.

“I am lucky and will forever be so proud to call you my Dad forever,” she wrote.

Ticket information for the state funeral is yet to be released. But Victorian Premier Daniel Andrews said there would be no crowd cap at the MCG for the event.

“It’s a fitting venue to say goodbye to someone who created so many indelible memories on that ground,” Mr Andrews said on Thursday.

“We wish we weren’t doing it, of course, he’s gone too soon.”