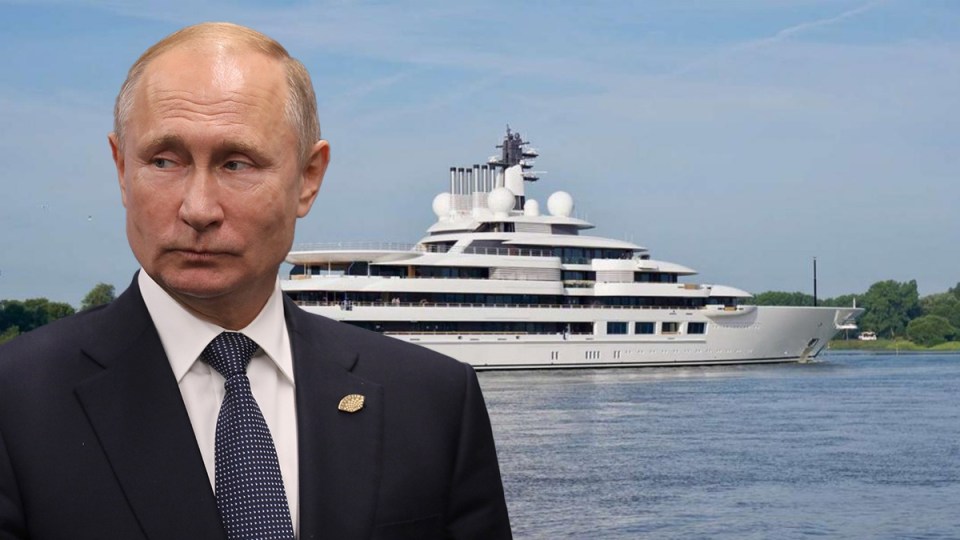 The Scheherazade is said to be worth an eye-watering $US700 million ($961 million). Photo: TND/Getty

Mystery is swirling in a small Italian town on the Tuscan coast as the owner of a luxury vessel, nicknamed ‘Putin’s yacht’, remains under wraps.

The yacht’s actual name is Scheherazade, and since its arrival in Marina di Carrara, locals have speculated that it belongs to Russian President Vladimir Putin.

Superyachts are just some of the luxury assets owned by Russian oligarchs being seized by several countries and the European Union in response to Russia’s invasion of Ukraine.

The point is to impose financial pain and put pressure on the people who keep Mr Putin in power.

US President Joe Biden fired a warning shot at Russian oligarchs last week, telling them: “We are joining with our European allies to find and seize your yachts, your luxury apartments, your private jets.”

The Scheherazade is said to be worth an eye-watering $US700 million ($961 million).

It boasts two helicopter pads, a swimming pool with a retractable cover that can be used as a dance floor, a fully equipped gym, and gold-plated fixtures in the bathrooms.

The speculation over its owner started when the ship arrived at the port and workers reportedly built a “tall metallic barrier on the pier” to partly obscure it from public view.

“Everybody calls it Putin’s yacht, but nobody knows whose it is,” Ernesto Rossi, a retired clerk, told the The New York Times.

“It’s a rumour that’s been going around for months.”

The ship’s captain, British national Guy Bennett-Pearce, has denied Mr Putin owns the ship or had ever been on it.

And while he maintains its owner is not on any sanctions list, he refused to confirm or deny whether the owner was Russian.

A “water-tight non-disclosure agreement” stopped him from saying any more.

According to Nautilus International, a trade union for maritime workers, non-disclosure agreements are common in the yachting industry and are sometimes included in contracts to maintain the owner’s desire for privacy.

Captain Bennett-Pearce told The Times that Italian investigators – “men in dark suits” – boarded the ship on Friday to examine its certification.

It is believed the Italian financial police have opened an inquiry.

This week Captain Bennett-Pearce had “no choice” but to hand over documents revealing the owner’s identity to Italian authorities, but was told the information would be kept confidential.

Mr Putin has long said he lives off his government salary and lives in a humble apartment.

That said, it is believed he is the owner of a separate superyacht named Graceful, among other luxury assets.

Graceful, worth more than $US100 million ($137 million), abruptly left Germany before finishing repairs in late February, amid threats of sanctions if Russia invaded Ukraine.

It was last tracked sailing toward Russia.

The EU has moved swiftly since Russia’s invasion of Ukraine, adding dozens of names to its sanctions list.

In Italy, reports said police seized villas and yachts on Saturday worth at least €140 million ($210 million) from four Russian elites on the sanctions list.

The Biden administration has also imposed sanctions on members of the Russian elite, along with their family members.

Mr Biden accused the oligarchs of lining “their pockets with Russian people’s money while Ukraine and the people are hiding in the subway from missiles that are being fired indiscriminately”.

The sanctioned individuals have had their assets in the US frozen and their properties blocked from use. They have been cut off from the US financial system, too.

According to a White House fact sheet, one of “Putin’s cronies” is Alisher Burkhanovich Usmanov, one of Russia’s wealthiest individuals.

Mr Usmanov’s property has been blocked from use in the US and by US people, including his superyacht and his private jet.

The yacht, the Dilbar, is one of the world’s largest, according to the fact sheet.