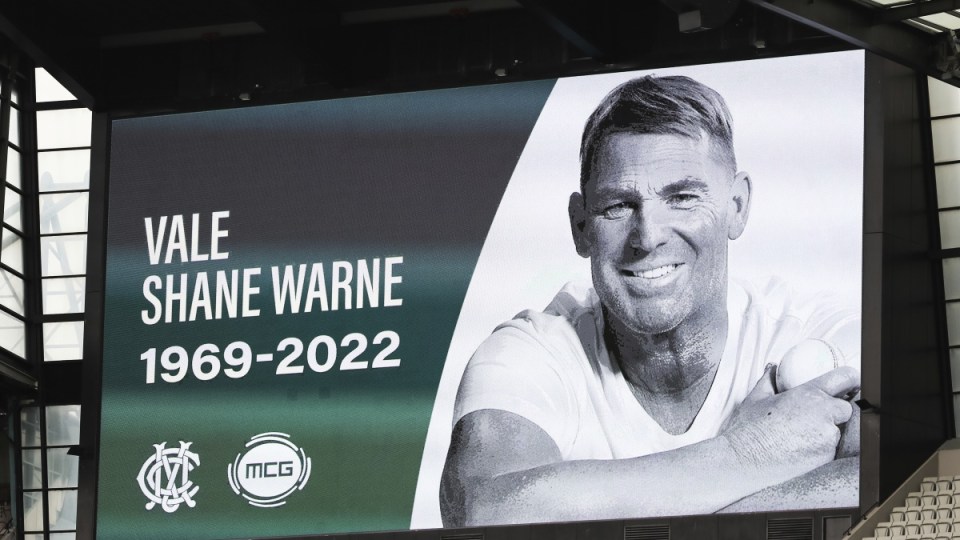 More than 42,000 people will attend the MCG memorial service to Shane Warne on March 30. Photo: AAP

The date for a public memorial service for king of spin Shane Warne has reportedly been set, with international celebrities also rumoured to be planning to jet in to pay tribute to the cricket legend after his sudden death.

Warne’s state service will be held at the Melbourne Cricket Ground on March 30, two weeks after a private family service, according to reports in the Herald Sun.

Warne, 52, died of a heart attack on the Thai holiday island of Koh Samui last Friday. Thai authorities say an autopsy has confirmed his death was due to natural causes.

Warne’s body is expected to return home to Melbourne on a private charter flight from Bangkok on Thursday. Thai authorities were still yet to release the body on Wednesday, despite earlier hopes the return might begin on Tuesday.

The Herald Sun, citing three sources with “detailed knowledge” of the memorial plans, said March 30 was the preferred date for a public tribute to Warne. It will follow a private family funeral, likely to be held next week.

Victorian Premier Daniel Andrews confirmed on March 7 that the Warne family had accepted a state funeral for the cricket legend.

Discussions are also underway to determine if the service will be a ticketed event for the public, according to the Sydney Morning Herald, to ensure seating.

Meanwhile, a star-studded guest list is also reportedly set to join fans at the MCG to farewell Warne.

World-renowned music artists Ed Sheeren and Chris Martin are among the high-profile celebrities reportedly making plans to visit Melbourne for the event.

An “absolutely gutted” Sheeran posted a tribute to Warne on his Instagram, after news broke last weekend of the cricketer’s shock death. Sheeran alluded to the pair’s mutual friendship with Mushroom Records founder Michael Gudinski, who died in his sleep just over a year ago.

“The world keeps taking incredible people away. I spoke to Shane on the anniversary of Michael’s passing this week, saying we were both raising a glass of 707 in his honour, and now this news comes out,” Sheeran wrote.

“Shane was the kindest heart, and always went above and beyond to make people feel welcome and special. Such a gentleman.

“He gave so many hours and years of his life to bring joy to others, and was such an amazing friend to me. I’ll bloody miss you, mate. Absolutely gutted.”

“I feel like the sun has gone behind a cloud forever. RIP my beloved Lionheart,” she wrote.

It’s not known how many of Warne’s celebrity friends will travel to Australia for the services. The cricketer’s long-time manager James Erskine said “everybody wants to turn up”.

“The whole world basically wants to turn up to remember Shane Warne. But Australia is a long way away,” he said on Tuesday.