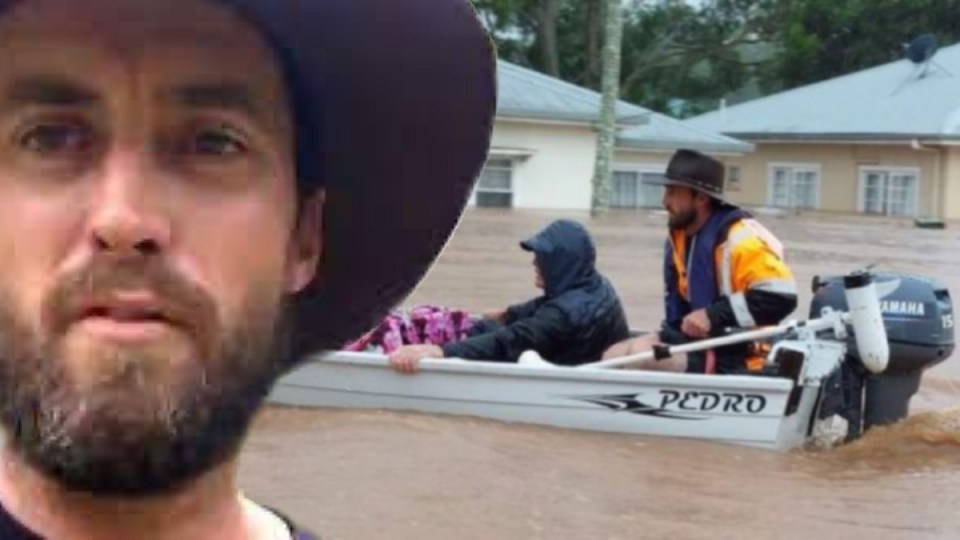 The heroics of Vincent Marychurch in Lismore are one of countless examples of leadership that should be recognised, Madonna King writes.

We can call them John and Jane Doe; individuals whose names we’ve never heard, but whose actions this week deserve to be a living textbook on leadership.

The John Doe who was plucked from dry ground and put on a monster crane riding the Brisbane River on a pontoon that had broken free of its mooring.

As it threatened to career down the river, towards the city’s built-up wharf area, the crane driver – under the cover of dark – brought it under control.

The group of Jane Does, none of them yet 30, who set up a kitchen in a city flood zone to feed the volunteers who had travelled for hours to lend a hand.

The anonymous workers, at a Brisbane City restaurant, who formed a human chain to rescue a man, trapped under debris, after his houseboat sunk within seconds.

Four Sikh volunteers who travelled for 34 hours from Melbourne, to provide a smile, soya curry and rice to those heartbroken in water-logged Lismore.

They’re in all communities, near and far. And on most days, they almost have nothing in common.

Men and women. Young and old. Tradies and fishermen. Nurses and lawyers. Tuckshop convenors and retirees.

But they rarely garner attention and almost never seek it. But when the chips are down, and their communities are suffering, their leadership shines.

They are planners, strategists, doers. They can make a dollar go a kilometre, and turn heartbreak into help. They have the ability to organise chaos, see the next move, and provide empathy in spades.

Today, these John and Jane Does are raising thousands of dollars for those who have lost their homes, manning support centres, feeding dozens and dozens of people, without any thought of their own hardship.

Sometimes, we are lucky enough to learn their names. Like Vincent Marychurch from the south of Lismore who – with his father-in-law – rescued more than 30 people in his three-man tinny.

Vincent Marychurch. Let’s remember his name, because as the deadly flood waters raced up his street in the early hours of the morning, he took charge.

No politician in sight. No community leader. No one even wearing a badge.

Vincent Marychurch took his tinny over to the elderly man, living opposite, who was chest-deep in water while standing on a chair.

Then he took it to others he could hear, but not see, as they crouched stuck under housing gutters. The man with water up to his neck he spotted through a window. He ripped the window out. A woman on dialysis. An amputee.

His qualifications? Ownership of a tinnie, and a boat licence. And a truckload of savvy.

Vincent Marychurch. He remembered the school had a high building, and decided that was his own personal evacuation centre.

“I tried to focus on the people who wouldn’t get out,’’ he told the ABC’s Raf Epstein this week. Those who might die first.

“Every single person that we rescued would have drowned or died, simple as that,” he said.

Maybe there’s something about tinnie owners.

SES volunteers will forever be grateful for the flotilla of private boats that arrived in Lismore on the back of four-wheel drives early in the week. Dozens and dozens of boat owners, all answering the call for help. Too many John Does to count.

The Fijians in Lismore raising the community’s spirit through song. It truly is a beautiful culture.
Shared on Facebook by SJ McKay pic.twitter.com/YswgPxoHhy

It has been a tricky year already for so many. COVID-19. A murderous flood, ironically termed a “100-year’’ episode, but which has now stolen homes and dreams for a second time in a decade. The heartache in Ukraine.

But in every disaster, it is local leadership and volunteerism that mends hearts.

Our chief health officers, whose leadership has moulded how we climb out of this pandemic.

The President of Ukraine.

Be honest. Did you really know much about Volodymyr Zelensky before last week? Did you even know his name? Mea culpa, I didn’t.

The 44-year-old former lawyer and entertainer is not known for his movie-star good looks. Or his influencer status on social media.

Russia’s brute force has shown Volodymyr Zelensky as a leader of his people; a calm, articulate and empathetic commander whose captaincy has enthralled the world.

We’ve seen the same leadership this week at a local level.

From John Doe and Jane Doe and Vincent Marychurch. From many of our local authority leaders. From big-hearted men and women, whose leadership is mending the hearts of others, and who believe what they do is more important than what they are called.

Our challenge surely, when the flood waters recede, is to work out how we thank them, and patent their leadership.