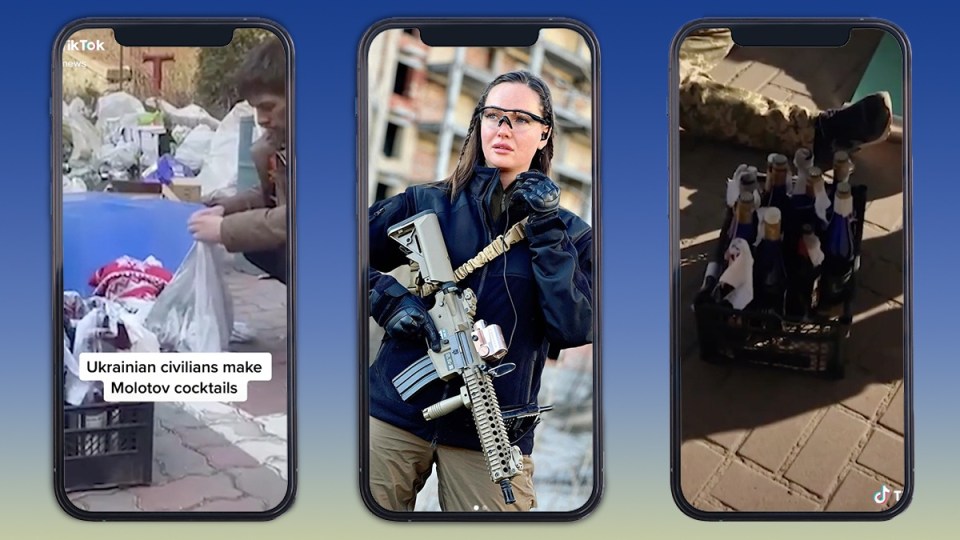 Social media platforms are currently saturated with amateur images and videos from the war in Ukraine, from civilians making Molotov cocktails to a beauty queen taking up arms.

It is, on one hand, an incredible space to share videos and rally support. But social media has proved time and time again that it is also a weapon of mass misinformation.

From the heights of leadership, Ukraine President Volodymyr Zelensky has used social media to debunk rumours he fled the city, as well as galvanise his people into fighting the invasion.

Joining him on the streets are everyday people.

Here is just a snippet of the content online.

Anastasia Lenna, Ukraine’s 2015 representative in the Miss Grand International pageant, shared a picture of herself armed with an assault rifle.

Dressed in military khakis, Ms Lenna captioned the post with the hashtags #standwithukraine and #handsoffukraine.

In a separate post, Ms Lenna said she shared the image to inspire people and show the world that the women of Ukraine are “strong, confident and powerful”.

“I appreciate all attention and support to my country, all people in Ukraine we will fight every day against Russian aggression,” she wrote.

The home-made weapon is made by pouring a flammable liquid into a glass bottle and stuffing the opening with a rag or other absorbent material.

Videos of Ukrainians making crates of the firebombs have gone viral on platforms like TikTok and Twitter.

Molotov cocktails and personal arms are how Ukrainian civilians are fighting back against the Russian invasion in the suburbs of Kyiv. CNN’s Matthew Chance reports. #cnn #news #ukraine #russia

Russian influencer and car mechanic Nastya Tuman went viral on TikTok and Instagram after she re-shared one of her videos in which she teaches people how to operate a Russian armoured personnel carrier.

She runs a YouTube channel dedicated to maintaining cars and sharing tips.

Ms Tuman posted the video amid reports that Russian vehicles were running out of fuel.

One viral clip shows a Ukrainian man confronting Russian troops standing by a military vehicle. When the man is told the vehicle has run out of fuel, he asks them: “Can I tow you back to Russia?”

The original tank video by Ms Tuman was posted last February and reshared this week with a new introduction.

According to Google translate, Ms Tuman captioned the new version: “If you come across a free or abandoned armoured personnel carrier – here’s a life-hack on how to launch it.”

A battlefield of misinformation

Several viral videos purporting to be from Ukraine have since been ousted as fakes.

One video claiming to show a Ukrainian girl challenging a Russian soldier was actually of Palestinian girl Ahed Tamimi, aged 11 at the time the picture was taken, confronting an Israeli soldier.

NBC reporter Ben Collins, who specialises in misinformation, debunked another viral video of a parachuting soldier. The top comment on the video, with over 80,000 likes, is: “bro is recording an invasion”.

As Collins pointed out, the video was originally shared years ago.

To combat misinformation, Facebook’s parent company Meta launched a special operations centre staffed by experts, including native Russian and Ukrainian speakers, who are monitoring Facebook “around the clock”.

Facebook, TikTok and Microsoft have also banned Russian state media on their platforms.

“Given the exceptional nature of the current situation, we will be restricting access to RT [Russia Today] and Sputnik across the EU at this time,” Nick Clegg, the VP of global affairs at Meta, tweeted.

Microsoft announced on Monday that it has stopped displaying RT and Sputnik content, removed the RT news app from the Windows app store and de-ranked these sites’ search results on its search engine Bing.

Microsoft has also banned advertisements from RT and Sputnik across its ad network.

The move came after the global platforms received requests from individual governments and the European Union to essentially punish the media outlets for spreading disinformation about the war in Ukraine.

RT, which has more than seven million followers on Facebook, described the invasion as a “special military operation” on air.

Armed selfies and Molotov cocktails: What the invasion of Ukraine looks like on social media