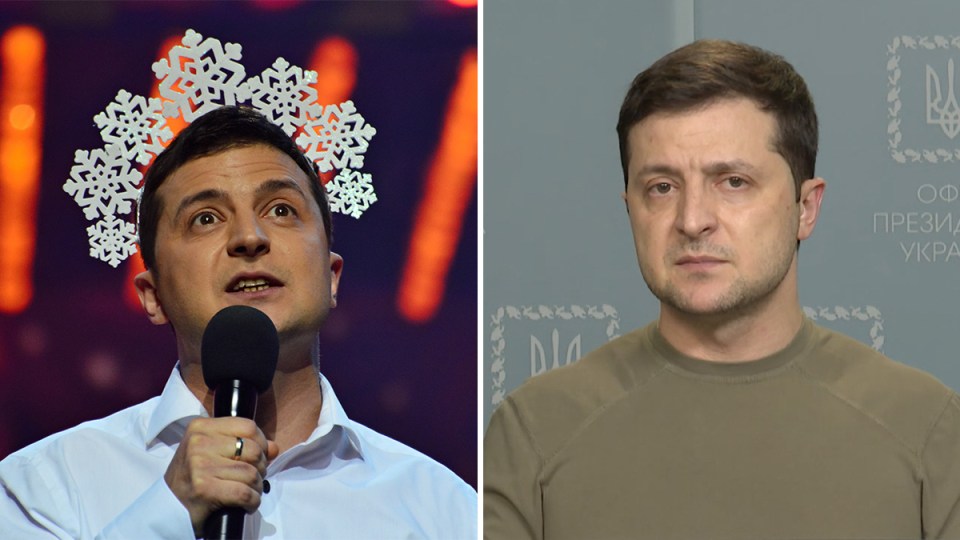 Volodymyr Zelensky found fame as a comedian and later as an actor and series creator. Photo: Getty

Before Volodymyr Zelensky was elected president of Ukraine in 2019, he created and starred in a political satire called Servant of the People.

“We only have a choice between two b——s. We just choose the lesser evil,” Vasyl says, exasperated.

Four years after the series premiered, Mr Zelensky was elected the real president of Ukraine.

Servant of the People

Mr Zelensky, 44, had no previous political experience when he tossed his hat into the presidential ring in a case of life imitating art.

Born to Jewish parents in the Ukrainian city of Kryvyi Rih, Mr Zelensky found fame as a comedian and later as an actor and series creator with the production company Kvartal 95, which he co-founded.

He won the Ukrainian version of Dancing with the Stars in 2006 – a montage of Mr Zelensky’s best moments from the show has gone viral amid his defiant response to Russia’s invasion – and he is the Ukrainian voice of Paddington, the titular character of the beloved family franchise.

Tidbits like this are appearing all over the internet.

But it was undoubtedly Mr Zelensky’s work on Servant of the People that was something of a road map for his rise to the presidency.

Servant of the People premiered during a time of great political unrest in Ukraine, where people’s faith in the government was at an almighty low.

Viktor Yanukovych was ousted from the Ukrainian presidency in February 2014 after massive street protests.

His opponents accused the former president of enriching himself, his family and his allies during his term.

Mr Yanukovych was replaced by billionaire Petro Poroshenko, who ultimately lost in a landslide vote to Mr Zelensky in 2019.

Mr Zelensky ran for president under the aptly titled Servant of the People party, founded by Kvartal 95.

He won more than 70 per cent of the vote, while Mr Yanukovych trailed behind on 24 per cent.

During his election campaign, Mr Zelensky took much advantage of his fictional role as president, blending reality with fiction.

He reinforced the idea that electing someone from a non-political background was the only way to clean up Ukraine’s bureaucracy.

In lieu of traditional campaigning, the comedian held free stand-up gigs instead of rallies to skewer his opponents. Talks of policy were replaced with viral, light-hearted videos on social media.

But his bid for the presidency wasn’t fake, as he told reporters many times.

“I’m very serious about our country and the lives of our people.”

Mr Zelensky’s critics may be worried he is too politically inexperienced to stand up to Russian President Vladimir Putin, who on Sunday ordered to place Russia’s nuclear forces on high alert, but no one can doubt Mr Zelensky’s unwavering commitment to his country.

Mr Zelensky was urged to evacuate Ukraine at the behest of the United States, but the president instead bluntly rejected the offer.

“The fight is here; I need ammunition, not a ride,” he said, earning the praise of his people and allies around the world.

Mr Zelensky has repeatedly taken to social media to rally national and global support on the frontlines and misinformation battlefield.

After missile strikes battered the Ukrainian capital of Kyiv on Friday, rumours spread that Mr Zelensky had fled the city.

But Mr Zelensky swiftly debunked the rumours in a video he filmed on Bankova Street, where the presidential administration is located.

Flanked by his statesmen, including the country’s prime minister, Denys Shmyhal, Mr Zelensky said: “The president is here.

“We are all here protecting our independence, our country, and we are going to continue to do so,” he said.

And again on Saturday, three days into Russia’s invasion, Mr Zelensky shared a selfie-style video of himself standing by the House with Chimeras on Bankova Street.

“Ukrainians, there’s a lot of fake information online that I call on our army to lay down arms, and that there’s an evacuation,” he said.

“I’m here. We won’t lay down our arms. We will defend our state, our territory, our Ukraine, our children. That’s all I have to say.

Top Ukrainian journalist Kristina Berdynskykh tweeted, “I have a lot of complaints about Zelensky over his domestic politics, but the way he behaves during the onset of absolute evil on #Ukraine is real political leadership and great courage.”

Mr Zelensky frankly admitted that he does not believe in the outcome of the meeting, “but let them try to make sure that no citizen of Ukraine has any doubt that I, as a president, did not try to stop the war”.