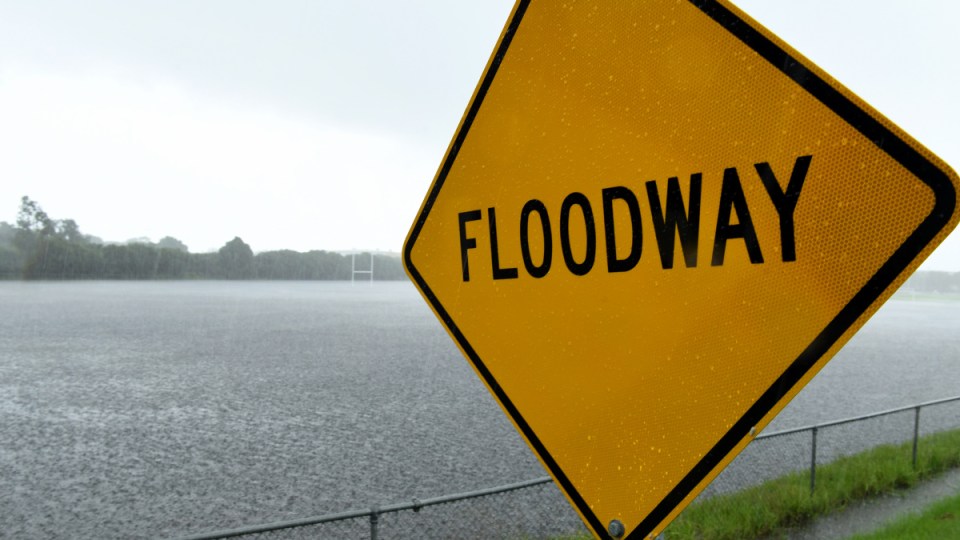 A Gold Coast man and his dog have been swept to their deaths as Queensland’s flooding crisis moves south.

The man, aged in his 50s, and his dog died when their car was swept away in torrential rain on Currumbin Creek Road about 3am on Monday.

It is the eighth fatality in south-east Queensland’s floods.

NSW is also in for more thunderstorms, heavy rain and damaging winds as extreme weather moves south along the coast after thousands of residents were displaced by flooding in the state’s north.

Parts of hard-hit Lismore are expected to be submerged under 16 metres of flood water.

On Tuesday morning, residents in low lying areas Ballina were told to evacuate their homes.

Hundreds of people across the region were stranded for hours on rooftops on Monday amid the crisis as state and federal emergency services struggled to access impacted areas.

Rescuers will again be searching for trapped residents on Tuesday morning.

A “Mud Army” of volunteers is primed to mop up once flood waters recede and Defence Force crews are on standby.

The Bureau of Meteorology has warned severe thunderstorms are set to return this week in what is expected to frustrate clean up efforts.

“They can bring heavy rain and damaging winds and large hail that will continue to impact the recovery efforts ongoing through southeastern parts of Queensland.”

Logan and Gold Coast City Councils are bracing themselves with flooding expected to exceed record 2017 levels on Tuesday.

The regions are copping the tail end of a low-pressure system moving south that has dumped one year’s worth of rain on parts of the southeast, affecting about 15,000 homes.

The Logan River is set to exceed the landmark 2017 flood level of 20.50m when ex-tropical cyclone Debbie hit.

About 1000 properties are already affected in the region before the 9am Tuesday predicted peak, prompting the council to open a 24-7 evacuation centre at Crestmead.

Locals were sandbagging their homes on Monday with about 1000 properties already affected, prompting the council to open a 24-7 evacuation centre at Crestmead.

Refuges were also available at Cornubia and Jimboomba but only during business hours due to power outages.

The system remains centred offshore from the Gold Coast as it impacts the city’s southern end and northern NSW.

It is expected to bring intense rainfall with six-hour rainfall totals between 60mm and 120mm predicted.

“The message is simple; stay home,” he said.