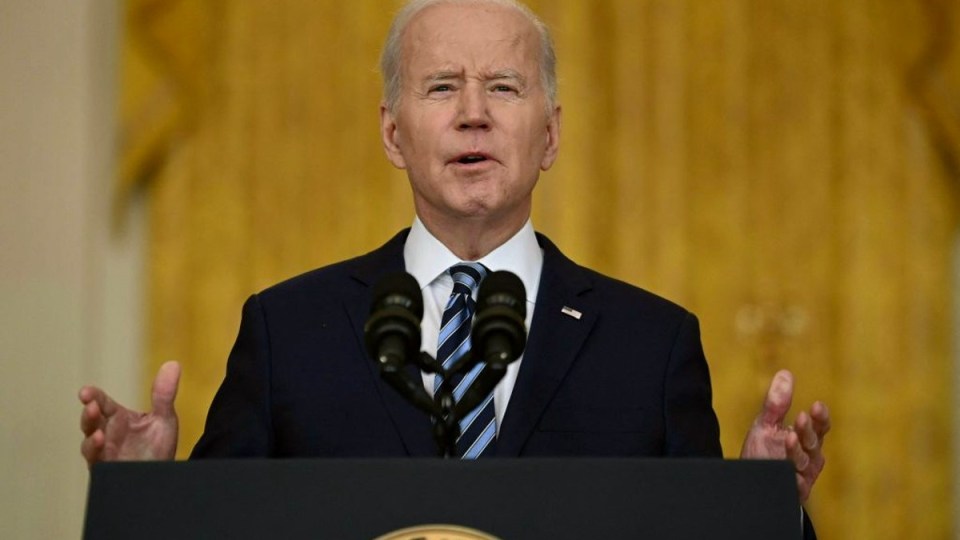 US President Joe Biden during an address on Friday morning in response to Russia's invasion. Photo: Getty

US President Joe Biden and world leaders have responded to Russia’s invasion of Ukraine with a promise to unleash a “devastating package of sanctions” to have the “maximum long-term impact”.

The US President, British Prime Minister and EU leaders have vowed to target Russian banks, companies, military and energy sector, with France saying it will respond “without weakness, with cold blood”.

In an address on Friday morning (Australian time), Mr Biden said a coalition representing more than half the world’s economies, including France, Germany, Britain, Australia and New Zealand, would cut off Russian banks and freeze assets.

Mr Biden said Russia would have to “bear the consequences” of its “naked aggression” and for “Putin’s desire for empire by any means necessary” having started a “war without a cause”.

The sanctions include limiting Russia’s ability to do business in dollars, euros, pounds and yen and impairing its ability to compete in the 21st century economy.

“We’re also blocking four more major banks. That means every asset they have in America will be frozen,” Mr Biden said.

This morning, I met with my G7 counterparts to discuss President Putin’s unjustified attack on Ukraine and we agreed to move forward on devastating packages of sanctions and other economic measures to hold Russia to account. We stand with the brave people of Ukraine. pic.twitter.com/dzvYxj7J9w

It came as thousands of Ukrainians scrambled to escape to neighbouring countries while Russia declared the first stage of its ‘military operation’ in Ukraine a success after taking 83 sites.

Frightened Ukrainian citizens carrying suitcases are attempting to flee their nation of 44 million people and cross into Poland and Romania, which are both NATO members.

Russian military tanks and troops rolled across the border on Thursday, despite global pleas for peace, in an action that Ukraine President Volodymyr Zelensky described as “a declaration of war against the whole of Europe”.

In an update on Twitter, Mr Zelensky said Russian forces were trying to seize the Chernobyl nuclear plant, which is 130 kilometres north of the capital of Kyiv.

The plant was the site of the world’s worst nuclear accident when a reactor exploded in April 1986, spewing radioactive waste across Europe.

The exploded reactor has been covered by a protective shelter to prevent radiation leak and the entire plant has been decommissioned.

Mr Zelenskyy wrote that “our defenders are giving their lives so that the tragedy of 1986 will not be repeated”.

Russian occupation forces are trying to seize the #Chornobyl_NPP. Our defenders are giving their lives so that the tragedy of 1986 will not be repeated. Reported this to @SwedishPM. This is a declaration of war against the whole of Europe.

Russia’s assault by land, sea and air is the biggest attack by one state against another in Europe since World War II.

In unleashing Moscow’s most aggressive action since the Soviet invasion of Afghanistan in 1979, President Vladimir Putin deflected global condemnation and cascading new sanctions – and chillingly referred to his country’s nuclear arsenal.

He threatened any foreign country attempting to interfere with “consequences you have never seen”.

Russian and Ukrainian authorities have made competing claims about the damage they have inflicted.

Russia’s Defence Ministry said it had destroyed scores of Ukrainian air bases, military facilities and drones, and confirmed the loss of a Su-25 attack jet, blaming it on “pilot error”.

It said it was not targeting cities, but using precision weapons and claimed that “there is no threat to civilian population.”

Condemnation has rained down from around the world with many governments readying new sanctions but NATO is saying its partners will not join in a war against Russia.

British Prime Minister Boris Johnson said Russia would be hit with the “largest and most severe” package of sanctions it had faced to punish “blood-stained aggressor” Mr Putin for invading Ukraine.

They include freezing the assets of all major Russian banks and excluding them from Britain’s financial system, the largest in Europe.

“Putin will stand condemned in the eyes of the world and of history. He will never be able to cleanse the blood of Ukraine from his hands,” Mr Johnson told the Commons.

“Although the UK and our allies tried every avenue for diplomacy until the final hour, I am driven to conclude that Putin was always determined to attack his neighbour, no matter what we did.

“Now we see him for what he is – a bloodstained aggressor who believes in imperial conquest.”

France has stated it will respond without weakness, with President Emmanuel Macron adding that Russia could expect tough sanctions aimed at its military, economy and energy sector.

“The events of last night mark a turning point in the history of Europe,” said Mr Macron in a televised address to the French nation, standing before French, European Union and Ukrainian flags.

“We will respond to this act of war without weakness, with cold blood, determination and unity,” he added.

In a televised address on Thursday, Mr Draghi said it was impossible to have meaningful dialogue with Moscow and demanded that Russia unconditionally pull its forces back to internationally established borders.

“We have our allies at our side … together we will do whatever it takes to preserve Ukraine’s sovereignty, Europe’s security, and the integrity of the international order based on the rules and values we all share,” he said.

Mr Draghi offered the “full and unconditional solidarity” of Italy to Ukraine and said the Italian embassy would remain open and fully operational in Kyiv.

“What is happening in Ukraine concerns all of us, our existence as free people, our democracy,” he said, adding that European Union leaders would impose a “very tough package of sanctions” on Russia later in the day.

“We have made it clear in every forum that we are ready to impose severe consequences … Now is the time to apply them.”