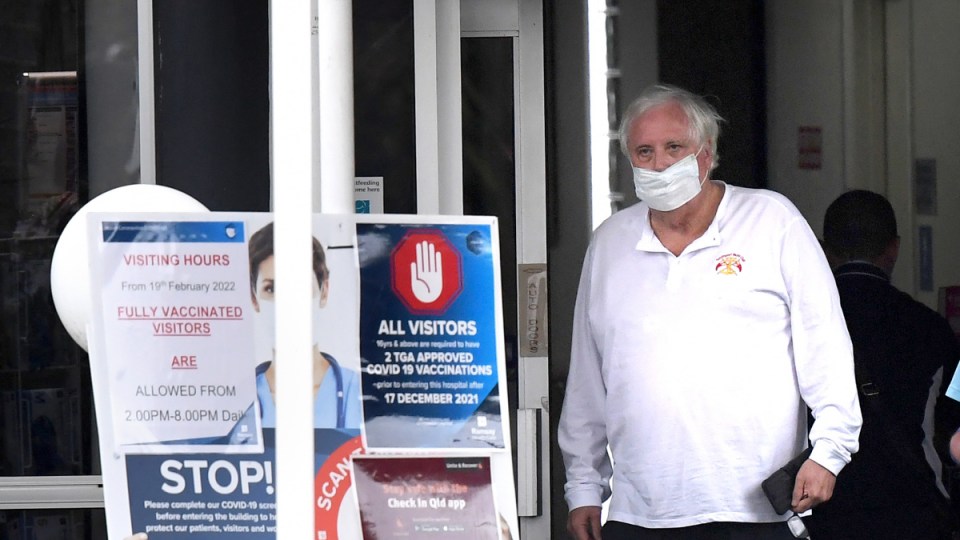 Clive Palmer has left the hospital where he was earlier taken by ambulance for a COVID-19 test. Photo: AAP

Billionaire businessman Clive Palmer has emerged from hospital where he was earlier taken by ambulance for a COVID-19 test.

The unvaccinated 67-year-old left a private hospital on the Gold Coast late on Thursday afternoon.

Wearing shorts and a face mask pulled under his nose, Mr Palmer was seen leaving the hospital in a car being driven by his wife.

The mining magnate, who is hoping to return to federal Parliament at the upcoming election, has been sick with “flu-like symptoms” for at least two days.

He tested negative for COVID-19 earlier this week.

Queensland Ambulance Service said one patient was picked up from a Paradise Point residence and transported to hospital on Thursday afternoon.

It is understood Mr Palmer had no treatment in hospital, but was taken there for another virus test.

Mr Palmer had been due to fly to Canberra on Tuesday to address the National Press Club, but received medical advice not to travel.

“It is hoped Mr Palmer’s address will be rescheduled for another time prior to the federal election,” a spokesman said on Tuesday.

The club described it slightly differently, saying it had been advised Mr Palmer had “COVID-like symptoms”.

The businessman is the United Australia Party candidate for the Senate in Queensland, with his party seeking seats in the upper and lower houses at the upcoming federal election.

Last election he spent more than $80 million on advertising, which is expected to be replicated in the lead up to the 2022 poll.

Mr Palmer held the Queensland federal seat of Fairfax from 2013 to 2016.

He has supported protests and court action against vaccine mandates and health-related restrictions.