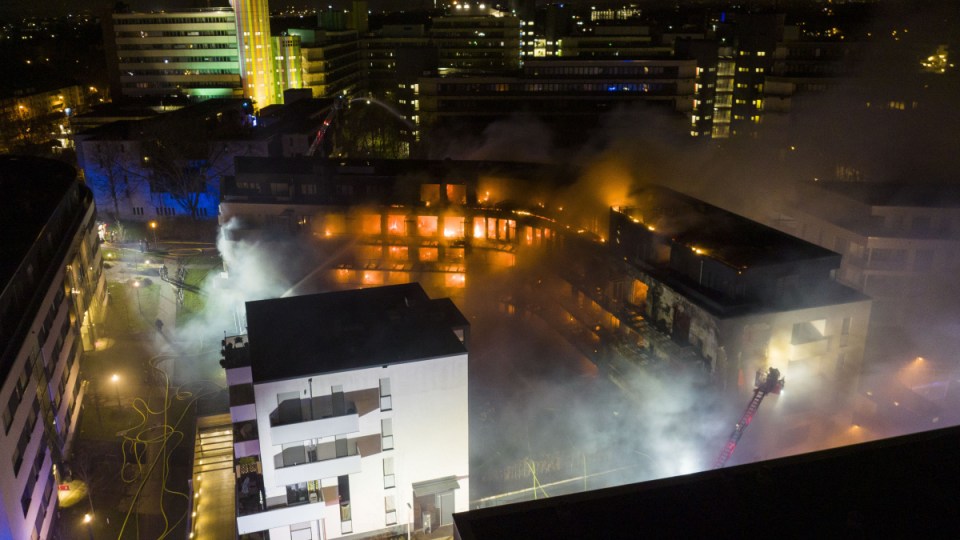 A fire whipped up by high winds has raged through an apartment complex in western Germany. Photo: AP

A fire whipped up by high winds has raged through an apartment complex in western Germany but caused only three injuries.

The building in the city of Essen, home to some 100 people, was completely gutted in the fire.

Mayor Thomas Kufen told dpa that so far no one had been reported missing and it appeared that no one had died.

“With a fire of this size, that is not always the case,” he said.

About 150 firefighters went to tackle the blaze, which had spread fast due to strong gusts from the latest storm system to hit Germany in the past week.

The three injured people were taken to hospital suffering from smoke inhalation.

Lennart Diedrich, 35, was one of the first residents to spot the fire.

“It was around 2 o’clock when I wanted to go to bed and so I turned off the last lights and outside someone shouted ‘Fire! Fire!'” he told dpa.

“And then I looked out of the window and there was smoke coming out … That’s when I said, ‘OK, this is serious.'”

He tried calling the fire service, got dressed and ran outside. “It was like an inferno. The wind whipped up the flames,” he said.

Two firemen ran inside, but soon shouted for help carrying a man in a wheelchair down the stairs.

Mr Diedrich said he went in to help and the three of them carried the man down the stairs and out of the burning building.

“Within 20 minutes the whole building was totally in flames,” he said.

Some 180 people, including residents of neighbouring buildings, had been taken to a nearby auditorium for shelter, local authorities said.

There were “people of all ages” including children, the elderly, and people in wheelchairs, said local care worker Sebastian Smitmans.

Counsellors were on hand to help those who had lost their homes in the fire.

One 69-year-old woman who lived in a roof apartment said she had been woken in the early morning by a loud knocking on the door.

She put on her coat and shoes and left straight away.

“I left my mobile on my night-table,” she said, along with her glasses. Her flat, she was told, had been totally burnt out.