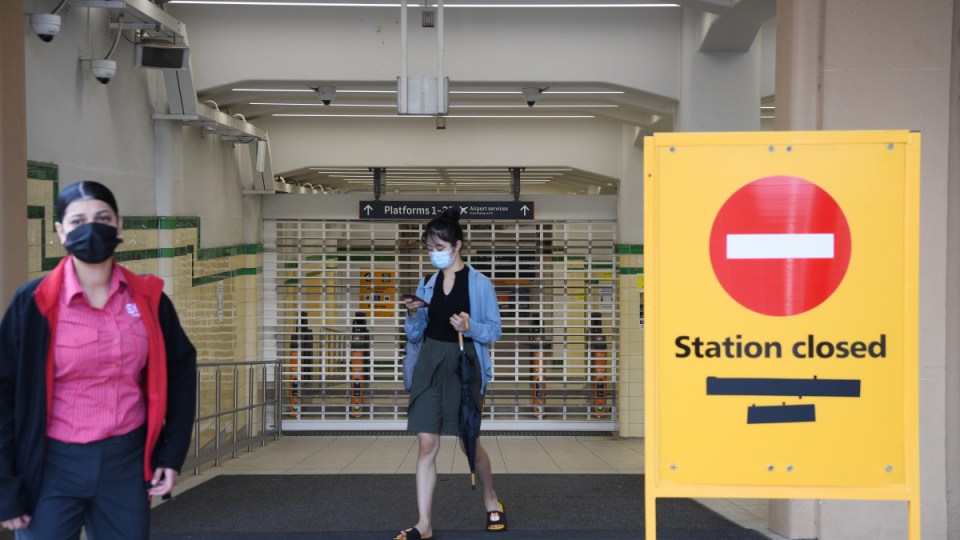 There was more train chaos across Sydney on Tuesday morning, with only limited train services operating after yesterday’s network-wide cancellation.

The NSW government and a transport workers’ union remain at loggerheads over an industrial dispute, and further disruptions are likely in the next fortnight.

They were left stranded across Sydney, Newcastle, the Central Coast, Blue Mountains and Illawarra during the morning and afternoon peaks.

In a statement on Monday night, Transport Minister David Elliott said reduced services would return across all lines on the Sydney Trains network from 5am Tuesday, running at a minimum half-hour frequency.

Sydney trains will run but on a limited timetable tomorrow – statement from the minister below – as the industrial dispute continues. pic.twitter.com/MCNhceHW73

“These limited services are there to support essential workers and commuters who have no other options to get to where they need to go.”

Sydney Trains and NSW Trainlink and the Rail, Tram and Bus Union remain before the Fair Work Commission to further resolve issues, and the government and the union continue enterprise agreement negotiations.

After an industrial meeting on Sunday night failed to result in a deal between the parties, Transport for NSW cancelled trains, saying it was impossible to safely operate services. However, neither it nor the state government have outlined exactly what the safety issues are.

“This decision was based on the operation assessment of Sydney trains and that ultimately rests with me. I made the decision and I stand by the decision,” Mr Longland said.

Premier Dominic Perrottet blamed the union for the shutdown, saying it was part of a “co-ordinated, concerted attack” on his government by the union and Labor.

“This is the Labor Party in bed with the union movement to cause mass disruption … the Labor-backed unions have been working on these strikes for many many months,” he said.

“The unions were intent on causing chaos, I’m incredibly disappointed with what has occurred across our city,” he said.

Mr Perrottet was angry that trains were out of action on the day that borders opened to international arrivals, children were trying to get to school, and university students were returning to campus.

The government said work rosters were “at the crux” of the current dispute and meant the rail system would not have been able to run to a government timetable on Monday, sparking the closure.

Sydney was flung into chaos today as the train system shut down. But, will the trains be running tomorrow? Alex Claassens, New South Wales Secretary of the @RTBUnion, joins us. #TheProjectTV pic.twitter.com/LppouFOcrM

But the RTBU hit back, saying the government was at fault for the gridlock. It said rail workers had turned up for work on Monday but that the Perrottet administration used a “high-stakes tactic” to cancel services then “blamed it on industrial action”.

RTBU NSW Secretary Alex Claassens insisted rail workers were not on strike and were ready to get trains back moving “at a minute’s notice”.

“Yesterday was just the lowest act I have ever seen anybody pull from an industrial strategy, to try to force us to cancel our industrial action, and blame us for actions we did not take,” he told the ABC on Tuesday.

“I want to stress again – our members are at work, we were happy to drive the trains, happy to move them, we were treated really badly, as were the people of NSW and they deserve better.”