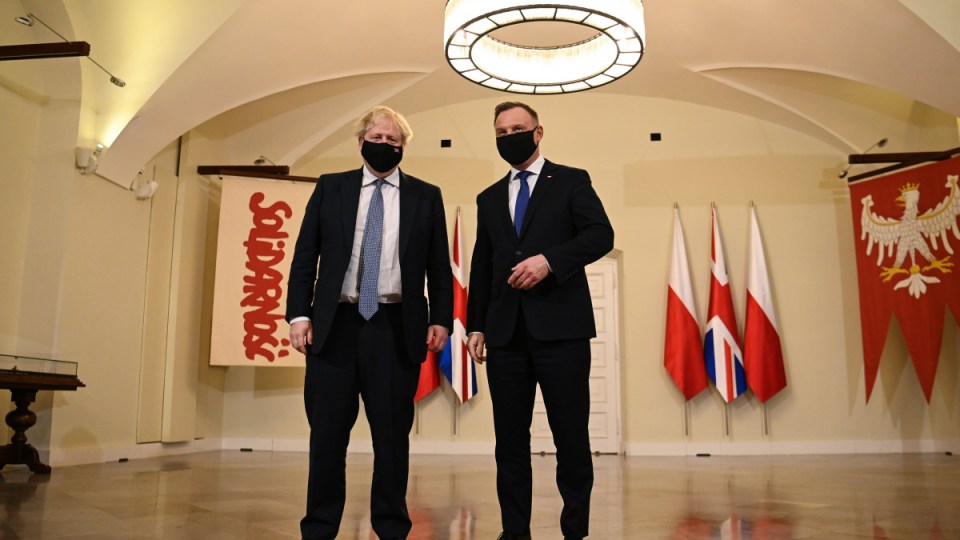 UK PM Boris Johnson met with the NATO secretary-general in Brussels for crisis talks over Ukraine and Russia, before heading to Poland to meet President Andrzej Duda. Photo: Getty

The NATO military alliance could face the “most dangerous moment” in its stand-off with Russia in the next few days, Britain says, as Russia and Belarus hold military exercises following a troop build-up near Ukraine.

Tensions remained high on Thursday, with Ukraine also staging its own war games, but leaders on all sides signalled they hoped diplomacy could still prevail in what British Prime Minister Boris Johnson called Europe’s biggest security crisis for decades.

In a new round of diplomacy, the British foreign minister Liz Truss held talks in Russia and Mr Johnson visited NATO headquarters in Brussels.

Meanwhile, officials from Russia, Ukraine, Germany and France were due to meet in Berlin to discuss fighting between government forces and pro-Russia separatists in eastern Ukraine since 2014.

Russia – at the same time as having more than 100,000 troops near Ukraine’s borders – denies accusations that it may be planning to invade its former Soviet neighbour although it says it could take unspecified “military-technical” action unless its demands to NATO are met.

“I honestly don’t think a decision has yet been taken [by Russia on an attack]. But that doesn’t mean that it is impossible that something absolutely disastrous could happen very soon indeed,” Mr Johnson told a news conference with NATO Secretary-General Jens Stoltenberg in Brussels.

“This is probably the most dangerous moment, I would say, in the course of the next few days, in what is the biggest security crisis that Europe has faced for decades, and we’ve got to get it right.

“I think that the combination of sanctions and military resolve, plus diplomacy is what is in order.”

Mr Stoltenberg also said it was a dangerous moment for European security, adding: “The number of Russian forces is going up. The warning time for a possible attack is going down.”

In a new point of friction, Ukraine criticised Russian naval exercises that it said made navigation in the Black Sea and Sea of Azov “virtually impossible”.

Mr Lavrov said Russia was in favour of diplomacy to resolve the crisis but that he could not understand British concerns over the drills in Belarus and denied Russia was coercing anyone.

He said the US and its allies were using Ukraine against Russia and also accused officials in Kiev of attempting to rewrite agreements intended to end the conflict in eastern Ukraine.

“I’m honestly disappointed that what we have is a conversation between a dumb and a deaf person. It’s as if we listen but we don’t hear,” Mr Lavrov said.

“The reality is we cannot ignore the build-up of over 100,000 troops on the Ukrainian border and the attempts to undermine Ukrainian sovereignty and territorial integrity,” she said.

“Fundamentally, a war in Ukraine would be disastrous for the Russian and Ukrainian people, and for European security.

“And, together, NATO has made it clear that any incursion into Ukraine would have massive consequences and carry severe costs.”

In contrast to US and British leaders, Mr Macron has played down the likelihood of a Russian invasion soon.

Russia has used the tensions to seek security concessions that would include a promise to never admit Ukraine to NATO and halt the military alliance’s expansion.

The European Union said on Thursday it had delivered a single letter in response to Russia’s proposals to member states on European security on behalf of the 27 foreign ministers of the bloc.

NATO and the US have already portrayed Russia’s main demands as non-starters.

After the initial phase of the joint drills was announced last month, Russia held a briefing for military attaches that lasted eight minutes and gave notice of an exercise that was already underway, a senior US state department official said.

Ukraine launched its own war games on Thursday which, like Russia’s joint drills with Belarus, will run until February 20.

The Ukrainian forces, whose numbers have not been disclosed, are set to use Bayraktar drones and anti-tank Javelin and NLAW missiles provided by foreign partners.

Ukraine was due to receive a further shipment of US military aid later on Thursday.

Despite the tension over the war games, the Kremlin’s point man on Ukraine, Dmitry Kozak, was set to meet officials from Ukraine, Germany and France in Berlin for the latest talks on the conflict in eastern Ukraine.

‘Strange, confused’: Hollywood steals the Queen’s first Platinum Jubilee extravaganza at the castle
Koalas in NSW, Qld and ACT to be listed as endangered
Today's Stories