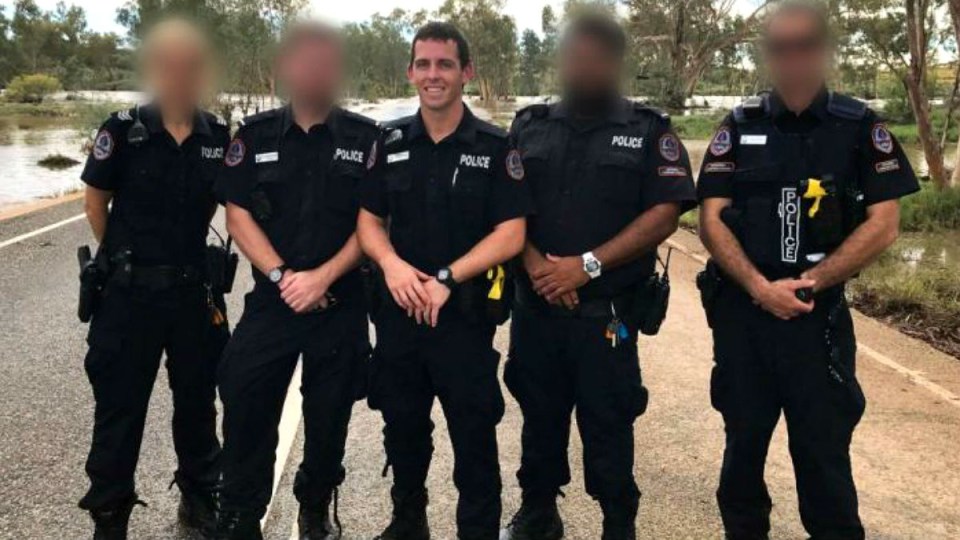 Disturbing video of the moment a Northern Territory policeman shot Aboriginal teenager Kumanjayi Walker three times has been shown to a murder trial.

Constable Zachary Rolfe, 30, has pleaded not guilty to the shooting murder of Mr Walker, 19, during a failed outback arrest attempt on November 9, 2019.

Confronting video of the violent incident in Yuendumu, 290 kilometres north-west of Alice Springs, shows Constable Rolfe and his partner, Constable Adam Eberl, identifying Mr Walker from a photo on Constable Rolfe’s mobile phone before the trio wrestle as the teen resists arrest.

Mr Walker can be seen holding a pair of scissors in his right hand after Constable Rolfe fires his first shot hitting the teen in the back while he was standing and struggling against Constable Eberl in a dark room of house 511.

It did not kill him and is not the subject of the murder charge. That relates to Constable Rolfe’s second and third shots, which the prosecution says were not legally justified.

They were fired when Mr Walker was laying on the ground with Constable Eberl on top of him “effectively restraining” him with his right arm pinned beneath him, according to prosecutor Philip Strickland SC.

The dark and grainy video, which has been played frame by frame to the jury for two days, shows Constable Rolfe’s right hand holding the gun at “point-blank” range from Walker’s torso as he fires the second shot 2.6 seconds after the first.

Constable Eberl then yells “don’t f–k around, I’ll f–king smash you mate” as the two officers handcuff Mr Walker’s hands behind his back.

Mr Walker then begins loudly moaning in pain and calling out for his mother, saying  “Leanne, Leanne” as he lay on a grubby mattress.

Constable Eberl again tells Mr Walker to drop the scissors before the teen says: “I’m going to kill you mob”.

The teen died in the Yuendumu police station about two hours later as officers attempted to apply first aid.