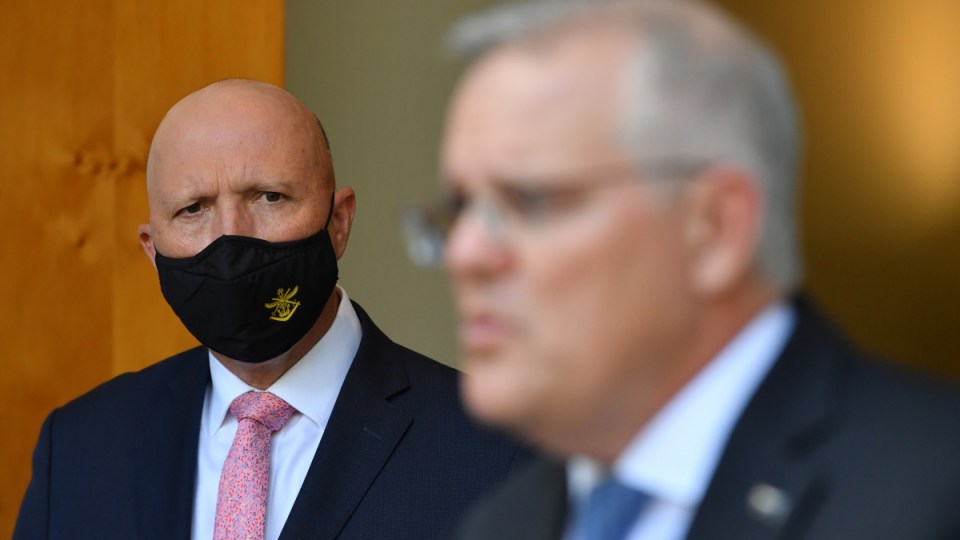 Supporters of Peter Dutton in his failed 2018 tilt at the Liberal leadership believe he is the government’s only hope of saving the furniture at the looming election.

A common view is that “Dutts”, as they call him, could save seats in his home state of Queensland and help stem the bleeding to the right on issues of vaccine mandates and religious freedom elsewhere.

The view has support outside the parliamentary Liberal Party.

Bolt wrote the Prime Minister Scott Morrison “looks finished and is now making a fool of himself to get some love”.

The columnist, like many across the Parliament, was simply aghast at Morrison’s stunt on Friday where he massaged a woman’s scalp and washed her hair for the benefit of the cameras in a Melbourne salon.

On Monday the Defence Minister followed up his vehement denials that he is the federal cabinet minister who described Morrison as “a fraud and complete psycho” in a text message with then New South Wales Premier, Gladys Berejiklian.

Another former NSW premier, Labor’s Bob Carr, named Dutton in a late Sunday tweet, sparking a response from the Queenslander that the claim was “baseless, untrue and should be deleted”.

Instead, Carr doubled down in another tweet saying unless another minister fessed up “who has most to gain from undermining further a flailing PM?”.

And the government is certainly flailing, the latest Morgan Poll even more dire than last week’s Newspoll, with Labor extending its lead to 56.5 to 43.5 two-party preferred – enough for a landslide.

Adding to suspicion that Dutton could be playing a game of destabilisation was the way he denied the tweets it on the ABC’s 7.30 program.

The trouble with that is, the journalist who broke the story has never said where his source lives. It smacks of denying something that was not alleged.

Furthermore, attempts to deflect suspicion away from Dutton as some of his admirers have by claiming he is not one of Berejiklian’s “besties” miss the admiration the then premier has expressed for him.

Just five months ago Peter Hartcher in The Sydney Morning Herald wrote that “even Gladys Berejiklian is fed up with the PM, who she privately regards as ‘evil” and a ‘bully’.”

He wrote: “The Premier has told Liberal colleagues she’d have preferred that Peter Dutton had won the last federal leadership ballot – she’d rather be dealing with Dutton because Morrison is so unpleasant.”

Besides, we don’t know the chronology of the text messages, the premier could have been responding to a message from Dutton.

Could it be that Dutton has taken a leaf out of Morrison’s playbook whereby he publicly and effusively praises the Prime Minister, as he did last Friday night, but is secretly plotting against him?

Remember the image of Morrison putting his arm around Malcolm Turnbull pledging his loyalty while his lieutenants were secretly gathering the numbers that delivered the top job two days later.

One Dutton ally tells me the wounds of that leadership ambush by Morrison still rankle, especially as the Defence Minister believes he was double crossed by the Prime Minister’s numbers men – they are all men.

It is noteworthy that the PM has chosen to publicly shrug off the text attack on his character and credibility – one ominously similar to one Barnaby Joyce sent just a year ago.

Morrison says he doesn’t believe one of his ministers is the culprit – why is not clear given that while Joyce was on the backbench when he wrote the PM was a “liar and a hypocrite” he had served in cabinet with him for several years previously.

The Prime Minister has now exercised “Christian forgiveness” on a contrite Joyce after orchestrating the Nationals leader’s abject apology.

It was a humiliation of the Deputy Prime Minister which angered his Nationals’ party room because Joyce owes his position to them and not the Liberal leader – without the Nationals numbers there would be no Morrison Coalition government.

The fact Morrison says he won’t be instigating a witch hunt for the other minister could suggest he knows, or suspects, who it is and is unwilling to make matters worse by blowing up his own cabinet.

It is far from certain Dutton could muster the numbers even if he harbours that ambition. One Liberal says “it would see us lose 40 seats”.

On that, even Dutton’s media urger Andrew Bolt seems to agree: “Changing leaders this close to polling day would be hugely disruptive and look pathetic, turning near-certain defeat into a rout.”

Labor’s Anthony Albanese did not miss in a round of TV and radio interviews. He said the “dysfunction and the dishonesty and the disunity means this government is paralysed in taking the action that really does concern Australians”.

Albanese nominated the aged-care crisis, pandemic mismanagement and the cost of living.

Something that has crumbled over three years will take more than three months or even a new Dutton leadership to fix.

Paul Bongiorno: ‘Dutts’ to the rescue in a sure sign of desperate times