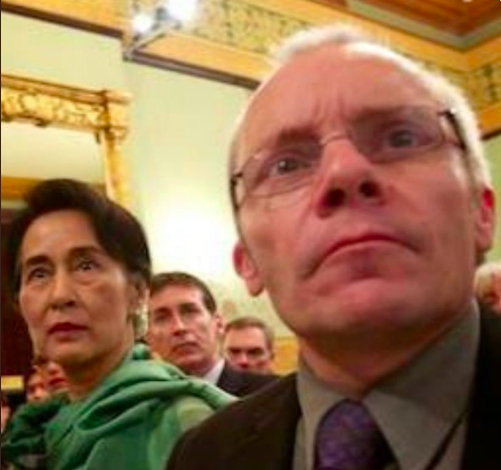 Multiple reports out of Cambodia had said Professor Turnell had been released after a year in detention in Myanmar.

Professor Turnell was a senior adviser to Ms Suu Kyi and was detained by the authorities four days after the February 1 coup last year.

He was charged with violating Myanmar’s immigration and official secrets acts by trying to leave the country with sensitive financial information and was facing a 14-year jail term.

The release of the former adviser to ousted Myanmar leader Aung San Suu Kyi honours a pledge made to Cambodian Prime Minister Hun Sen as chair of ASEAN during a visit to the crisis-torn country in January.

According to the official Agence Kampuchea Presse on Monday, Hun Sen said he welcomed Professor Turnell’s release by junta leader Aung Min Hlaing, which followed his request on behalf of Australia and a visit to Cambodia by Australian Foreign Minister Marise Payne in November.

“I will not drop my commitment for the peace in Myanmar based on the Five-Point Consensus in Jakarta. I want political prisoners to be released, ceasefire, assistance, and dialogue there,” AKP quoted Hun Sen saying.

In a separate report by the government-friendly Fresh News service, Hun Sen said during an inauguration ceremony: “The release is indeed to the senior general’s credit, but at least I also contributed as the rotating chair of ASEAN.”

But a Department of Foreign Affairs and Trade spokesperson told AAP in a statement on Monday night that Myanmar authorities had advised DFAT that “Professor Sean Turnell remains detained”.

“The Australian government repeats its call for Professor Turnell’s immediate release, and for his rights and welfare to be upheld,” the statement said.

Pressure has been mounting on the junta to release Professor Turnell since Hun Sen became the first leader to visit Myanmar since the coup in an attempt to move an ASEAN-backed Five-Point Consensus forward.

“Professor Turnell’s detention is unjust, and we reject the allegations against him,” Senator Payne said in a statement on Sunday.

“We once again call for Professor Turnell’s immediate release so that he can return to Australia to be with his family and for his rights and welfare to be upheld.”

Australia’s foreign affairs agency has been contacted for confirmation of Professor Turnell’s release.