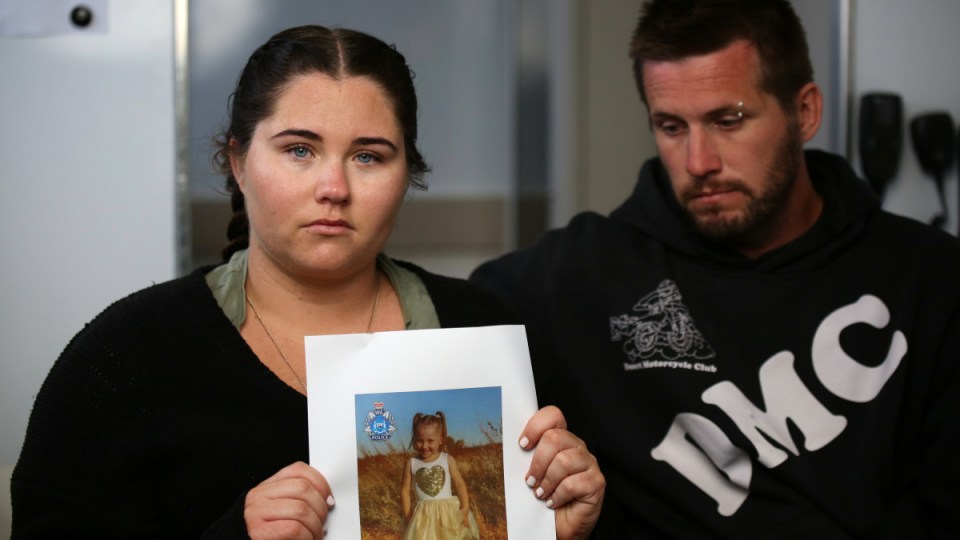 A young girl snatched from her family’s campsite by a stranger and held for 18 days has “blocked out a lot” of what happened, her mother says.

Ellie Smith had gone to bed feeling hopeless the night in early November that police called at 1am to say they’d found four-year-old Cleo alive and locked in a room of a house seven kilometres away.

The distraught mother rushed to the hospital to see her “baby”.

“She was sitting on the bed and we ran up to her and she was like ‘Hi mum’, like nothing had happened,” Ms Smith told Nine’s 60 Minutes in an interview broadcast on Sunday.

In the days and weeks since their reunion, Ellie and Jake have learned more from Cleo as she moves on from her ordeal– but understandably, it’s a slow and delicate process. #60Mins pic.twitter.com/otnvFLmgOG

The reuniting scene at Carnarvon, about 900 kilometres north of Perth, was one of joy but at the same time Ms Smith noticed Cleo’s hair had been cut and dyed.

“I still don’t think she really understood what happened in general, you know, being so young.”

Since getting home Cleo doesn’t like closed doors and sleeps with the lights on, and woke screaming with “nightmare after nightmare”, Ms Smith said in her first media interview.

“Still to this day we don’t know the full story,” she said.

“She has blocked out a lot as to what’s happened. She went into survivor mode and pushed it very far away.”

Just three months after their precious daughter Cleo was rescued by police, Ellie Smith and Jake Gliddon are still coming to terms with one of the most extraordinary child abductions in Australian history. #60Mins https://t.co/f47yZN6b1L

Terence Darrell Kelly, 36, has pleaded guilty to abducting Cleo from a remote Blowholes campsite in Western Australia where Ms Smith, her partner Jake Gliddon, Cleo and her six-month-old sister Isla were sleeping in a tent.

Cleo’s disappearance sparked a major police investigation that led detectives to a property in Carnarvon, minutes from Cleo’s family home.

Officers forced entry and found the little girl alone in a room, physically unharmed and playing with toys.

“We’ve got a long way to go and so does she,” Ms Smith said of the family’s recovery.

“She (Cleo) is probably going to be dealing with this for the rest of her life.”

Details of the time Cleo was held remain sketchy.

“Her night and day was very mixed up,” Ms Smith said.

“She told us she could hear dogs barking … we don’t know if she was in that one room or moved.

Ms Smith said she didn’t want Cleo to have to relive the experience by talking about it.

“We didn’t ask her any questions as to what happened. Why would you want to put your child back through that?”

Kelly is yet to answer other charges and more details of the kidnapping are expected to be outlined when he faces Perth District Court on March 25.