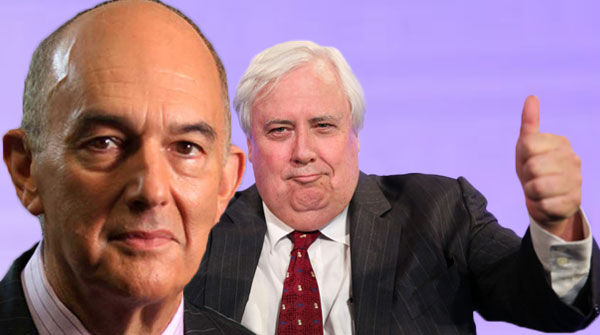 There is something grossly obscene when a billionaire maverick businessman can boast he is already running the most expensive political campaign in Australian history.

“Freedom, Freedom, Freedom” are the catchcries of his trademark black and yellow messages with the statement “We can never trust the Liberals, Labor or Greens again”.

Palmer is promising to top the $83 million splashed out in 2019 to achieve what he boasted after the election was his prime goal of keeping Labor’s Bill Shorten out of The Lodge.

So far the target is all the major parties, though curiously the Nationals avoid a mention, unless as a Queenslander he lumps them in with the hybrid Liberal National Party in that state.

Labor’s national president Wayne Swan is convinced Palmer will pivot again against the party in the final weeks of the campaign and he says the billionaire can’t run months of ads attacking the major parties without it having a significant influence.

This is certainly what was found in Labor’s 2019 post-election review.

In a country where political canvassing is exempt from truth in advertising laws our democracy is particularly vulnerable to cashed-up vested interests.

That our federal government has done nothing about it is more than disappointing – it is reprehensible.

Swan says the remedy is simple: More transparency and legislated expenditure limits would go a long way to have our democratic contests on a more level playing field.

There is already compelling evidence that Australia is an oligarchy – a country run by a small group of very wealthy individuals and corporations, particularly in mining and resources but extending to media and other key sectors.

Palmer announced last week he will be his United Australia Party’s No.1 Senate candidate in Queensland but it would be a mistake to think that it is only the Sunshine State that is susceptible to his siren song.

So far Palmer has not flagged if he intends to try again and challenge Western Australia’s extended border closure, but he is already suing Premier Mark McGowan for defamation and is threatening to take the Queensland government to the High Court if it bans him from pubs, bars and other public venues because of his refusal to take the jab.

With Queensland, like all the other states that have opened their borders, struggling to contain the Omicron variant wave of infections and death toll, Premier Annastacia Palaszczuk is confident she is on firm ground.

Certainly on much firmer ground than Deputy Prime Minister Barnaby Joyce, whose confused attempt to defend the federal government’s handling of the pandemic denied there had been deaths before he had to quickly backtrack.

Since January 1, 891 Australians have died from COVID, at three times the rate during the Delta wave.

Anthony Albanese and his health spokesman Mark Butler have not followed the Prime Minister and his senior colleagues in calling for WA to open up.

In fact, they see the $1 million the federal government spent supporting Palmer’s High Court challenge as a negative for Scott Morrison.

While some in federal Labor would like Premier McGowan to spell out his strategy for exiting fortress WA, Anthony Albanese is backing the premier.

The opposition leader says Western Australia is leading the country on health and the economy, McGowan has made “a difficult decision” but Albanese “doesn’t want to see any restrictions on anybody, on any activity one day longer than necessary”.

Palmer’s ability to cause chaos on the conservative side of politics is potentially lethal for Scott Morrison this time.

The very voters, the angry and the disengaged who helped deliver the Coalition’s improbable victory last time are being assiduously targeted by the cashed-up businessman.

Last week a Palmer ad was laser-like in its focus on the Prime Minister.

It  was headlined “Scotty from marketing” with the subtitle: “If you don’t know where you’re going, any road will get you there.”

Albanese, in his first major speech of the year at the National Press Club on Tuesday, will aim at the same vulnerability.

He will accuse Morrison of consciously not wanting to leave a legacy when Australia is calling for strong leadership, courage and vision.

Clive Palmer won’t be able to buy that no matter how much he spends, but he can make it very hard for Albanese to try and deliver it.