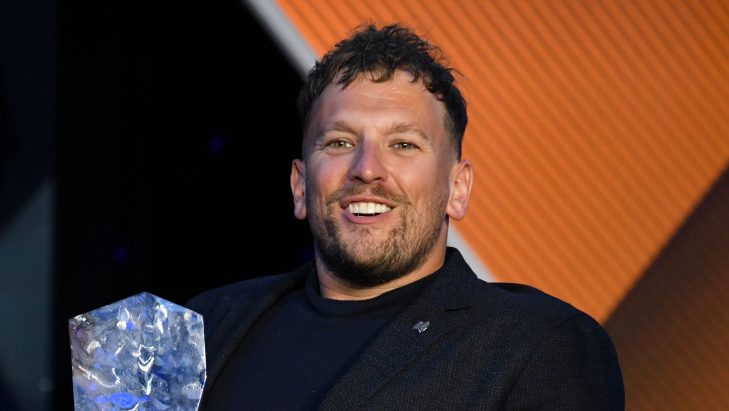 Dylan Alcott with his 2022 Australian of the Year award. Photo: AAP

Tennis champion Dylan Alcott is determined to be the disability role model he couldn’t find when he was growing up in a wheelchair and hating being different.

Born with a tumour wrapped around his spinal cord, Alcott despised his disability and “didn’t want to be here”.

But as he made history as the first person with a disability to be named Australian of the Year in 62 years, he said being different was “the best thing that’s ever happened to me”.

“I’ve been in a wheelchair my whole life … I’ve known nothing but having a disability,” he said in his acceptance speech in Canberra on Tuesday night.

“And whenever I turned on the TV, or the radio or the newspaper, I never saw anybody like me. And whenever I did, it was a road safety ad where someone drink drives, has a car accident and what’s the next scene? Someone like me in tears because their life was over.

“I thought to myself, ‘That’s not my life’, but I believed that was going to be my life. But I’m so lucky that I had one of the best families, some of the best friends, my beautiful partner and my whole team who told me that I was worthy.

“I’m honestly so honoured to be up here and it’s because of them and everybody in my life that I sit here as a proud man with a disability tonight.”

Alcott received the honour fresh off a win at Melbourne Park before rushing back to try to secure an eighth Australian Open title.

Over his career he has racked up 23 quad wheelchair grand slam titles and recently became the first man in history, in any form of tennis, to win the elusive Golden Slam (winning all four majors and an Olympic gold medal in the same year).

“I really hope I make you proud out there. But winning grand slams and gold medals isn’t my purpose,” the 31-year-old said.

“It’s, like, the 30th priority of my life. My purpose is changing perceptions so people with people like me can get out there and live the lives they deserve to live.”

Using the moment to call for free rapid antigen tests for people with disabilities, Alcott said the last two years of the pandemic had been tough on many people and he felt “ridiculous” being chosen for the honour.

“To our front-line workers, our nurses, our doctors, people running our vaccines, ambulances, firefighters, you deserve this much more than a guy who hits tennis balls and loves talking. I really mean that. It’s such a huge honour.”

Wow. I’m forever grateful. My purpose today and everyday is to change perceptions so people with disability can live the lives they deserve to live. I’ll do my best to make you all proud as your Australian of the Year xx pic.twitter.com/KWmMPvpSsh

Alcott praised his Australian of the Year predecessor Grace Tame, who used her platform to advocate on behalf of fellow childhood sexual abuse survivors.

“You are fierce and I love it and you have done so much for your cause,” he told her.

“And if I could be one-eighth of the Australian of the Year that you were, I think I’ve done my job.”

Prime Minister Scott Morrison announced the four Australian of the Year Award recipients at the National Arboretum. Alcott was also appointed an Officer (AO) of the Order of Australia.

Winner of a swag of wheelchair tennis grand slams, as well as Paralympic gold medals, Alcott is no stranger to making history.

Very few people win Paralympic Games medals in both basketball and tennis, but that’s exactly what Alcott did.

After a stint in wheelchair tennis at the beginning of his sporting career, Alcott made the switch to wheelchair basketball. He was just 15 when the Australian national team the Rollers won bronze at the world championships in 2006.

A silver and gold Paralympic medal later and Alcott returned to his first sport, wheelchair tennis, in 2014.

Between training and competing, Alcott founded the Dylan Alcott Foundation to provide scholarships and grant funding to marginalised Australians with a disability.

Alcott will immediately fly home to Melbourne to compete in his eighth Australian Open final on Thursday.

It will be Alcott’s last professional tennis match after he announced his retirement from the tour.

“I’m very purpose-driven and my purpose is to change perception so people with a disability can live the lives they deserve to live.

“Not just in sport – in employment, education, film, television, dating, going to bars, going to festivals.

“I asked myself when I made the decision to retire, ‘Have I done that in tennis?’, and I feel like I have.

“Now it’s time for me to do something else, but that purpose will never stop.”

Senior Australian of the Year

The 2022 Senior Australian of the Year is 71-year-old Valmai Dempsey from Canberra.

Ms Dempsey has dedicated more than 50 years of her life to St John Ambulance, first starting as a cadet volunteer while still in primary school.

The St John Ambulance veteran had a tough start to 2020, first with the devastating bushfires, followed by the COVID-19 pandemic.

Ms Dempsey led 40 fellow volunteers as they supported fire-affected communities and, when the pandemic struck, personally reached out to every volunteer in the St John team to make sure they were “doing OK”.

She is affectionately known as Aunty Val in her community.

Young Australian of the Year

The honour of 2022 Young Australian of the Year went to Dr Daniel Nour, who founded Street Side Medics in August 2020.

Manned by 145 volunteers across four clinics, Street Side Medics has helped changed the lives of 300 people.

It has supported patients with neglected medical needs and detected conditions that may have otherwise gone unrelated, including diabetes, thyroid disorders, hepatitis C, HIV, heart disease and cancer.

Dr Nour works full time on the frontline at the Royal North Shore Hospital and then volunteers his afternoons to Street Side Medics.

Shanna Whan, the tireless founder of grassroots charity Sober in the Country (SITC) has been named Australia’s Local Hero.

After almost losing her life to alcohol addiction in 2015, Ms Whan, 47, quit drinking and vowed to help other Australians in similar positions in rural Australia.

From paddocks to social media platforms, Ms Whan has travelled the country to tell people that “it’s OK to say no to booze” and to encourage friends to be better supporters.

It took Ms Whan around 20,000 hours to establish the charity, which saw her appear on Australian Story in 2019 to share her journey to sobriety.

Australian of the Year Dylan Alcott: ‘I sit here as a proud man with a disability’