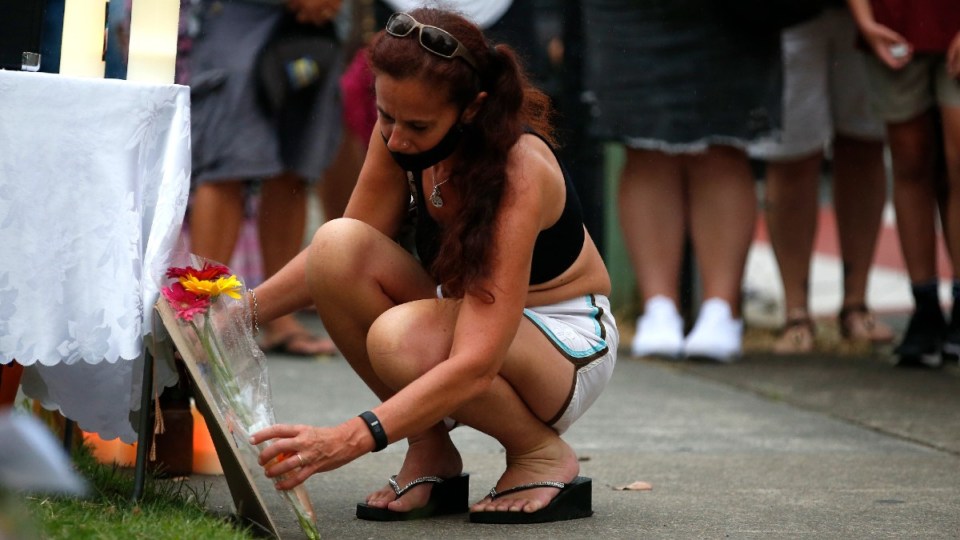 About 150 people gathered for a vigil outside the girl’s Tweed Heads school. Photo: AAP

A large crowd of mourners gathered for a candlelight vigil celebrating the life of a nine-year-old girl as details emerged of the movements of the man charged with her murder.

The girl, who can no longer be named due to a charge being laid, was allegedly murdered while holidaying with family in the Blue Mountains last week.

The grim discovery of her body in a barrel dumped near the Colo River came after a five-day search of bushland around the Wildenstein Private Gardens, about 120 kilometres north-west of Sydney at Mount Wilson, where she had last been seen alive.

Justin Stein, 31, faced court on Wednesday charged with murder after being arrested at a Surry Hills unit.

Police revealed they analysed CCTV and GPS data to track Stein’s movements after the girl was reported missing.

It’s alleged Stein purchased heavy sandbags from a hardware store on Thursday afternoon and drove to an inner-Sydney dock where he failed in an attempt to float a boat.

He then travelled back to the Colo River where police discovered the child’s remains in a barrel in dense bushland.

The Daily Telegraph reports that police will allege the accused drove around Sydney for up to five hours with the body in the back of the boat while he tried to work out where to dump her.

“Those movements included … to fuel a boat and then to try and float that on one of the docks on Sydney Harbour … then tracking that individual back to the location [where the body was found],” he said on Wednesday.

According to court documents the girl was murdered on Tuesday night or Wednesday morning last week, days before she was reported missing.

Police have been unable to speak to the girl’s mother who remains in hospital after suffering a medical episode after her daughter’s disappearance.

The child lived in Coolangatta in Queensland with her grandmother and was holidaying in the Blue Mountains with her mother and the accused, the fiance.

A sombre vigil was held on Wednesday night outside the gates of Tweed Heads Public School where the girl had been a student.

About 150 people gathered holding candles and leaving bouquets of flowers and messages and staying on despite light rain.

A message on the school’s notice board read “don’t count the days, make the days count”.

A statement from the school on Wednesday morning said it was “absolutely devastated” by the girl’s death.

The school shared a recent photo of the girl holding a literacy award she received at their end-of-year presentation day.

Prime Minister Scott Morrison said his thoughts were with the family after the unfortunate end to a search for the missing girl.

“You hope for the best. You pray for it, but it doesn’t always occur,” Mr Morrison said.

Investigations are ongoing, with police yet to determine how she died or any motive for her murder.

Stein’s lawyer told the court his client had been prescribed a fairly high dose of antipsychotic drugs for many years.

The court was told the case, due back in court on March 18 in Penrith, involved some “complexities”.