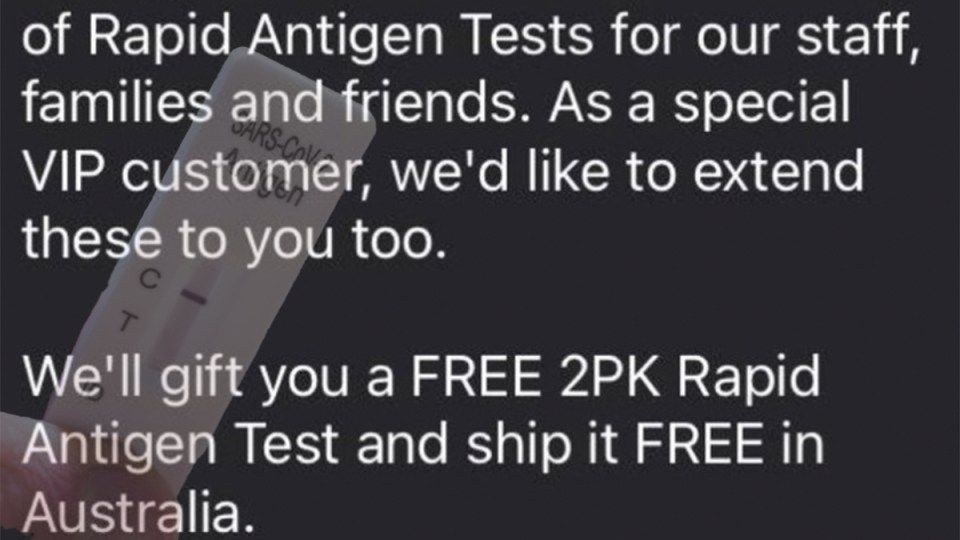 St. Ali was blasted by social media over the SMS offer. Photo: TND/Twitter

Melbourne coffee supplier St. Ali has been forced to apologise after offering a rapid test promotion that left a bitter taste.

The company sparked a storm after sending text messages to its subscriber list on Monday night, promising to send VIP customers a “FREE” two-pack of RATs, for every order of at least $159.99.

“We’ve been fortunate enough to secure a limited number of rapid antigen tests for our staff, families and friends,” the message read.

“We’ll gift you a FREE 2pk rapid antigen test and ship it FREE in Australia.”

The SMS said the online-only offer was limited to one per person and would be available until sold out.

But backlash was swift, with customers taking to social media platform Reddit to share screenshots of the message and their poor opinion of St. Ali’s offer.

The discussion also made its way to Twitter, where users piled on more criticism.

Some responded by saying it did not sit right, while others called for the business to be reported for price-gouging.

The original thread on Reddit was locked on Tuesday morning to prevent further discussion. The moderator advised users that “witch- hunting the owner of the business” was not OK.

The coffee supplier also sells face masks, forehead thermometers and its own brand of hand sanitiser.

One social media user said the company sells a “COVID Safe Bundle” for $150, but this is not visible on the St. Ali website.

St. Ali has since retracted and apologised for the stunt in a follow-up text – also shared via social media – apparently sent to the same subscriber list.

“We believed this was a way of supporting our customers whom purchase from us regularly, but the message has been lost. We can see in hindsight it was inappropriate,” it said.

The SMS then promised to donate future surplus tests to Father Bob’s charity in South Melbourne to distribute “as he sees fit.”

The uproar came as the consumer watchdog vowed to crack down on rapid test price-gouging amid surging Omicron case numbers and amid the continued shortage of rapid tests across the country.

As reported by The New Daily, retailers will be named and shamed for ripping off Australians who need to get tested for COVID-19.

The Australian Competition and Consumer Commission said the federal police had been given evidence against the worst offenders, who were charging up to $70 for a single RAT.

Amid the ongoing staffing issues caused by Australia’s Omicron surge, unions have also called on employers to make rapid tests free for workers.

Unions held a crisis meeting on Monday to discuss the problems caused by the massive COVID spike.

They will write to every employer across the country asking them to conduct new risk assessments about Omicron’s effect on workplace health and have threatened to strike if businesses don’t do enough to ensure worker safety.

Australian Council of Trade Unions secretary Sally McManus said the top priorities for unions were improved ventilation, higher-quality masks such as the C2 or N95 varieties – and plans to require businesses to buy RATs for workers “once supply is resolved”.

Unions also want businesses to delay any mandates requiring workers to return to the office.