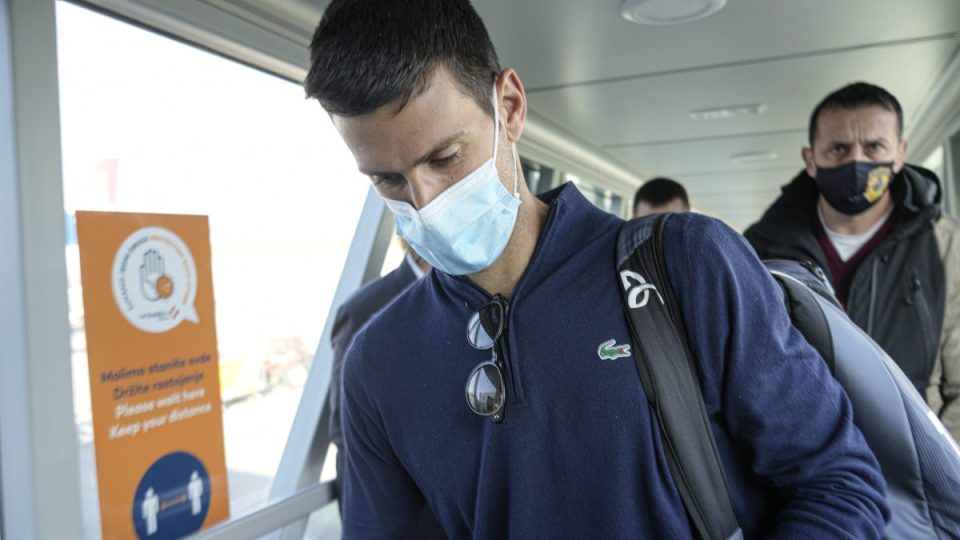 Novak Djokovic, who usually lives in Monaco, has travelled to Belgrade where he is staying with family. Photo: AAP

Novak Djokovic has touched down in Serbia to a hero’s welcome – and to yet more doubt about his tennis future while he refuses to get vaccinated against COVID-19.

After being denied a chance to pursue his 2022 Australian Open dreams, the world No.1 male tennis player has been warned he may also be barred from taking the court in the French Open.

A spokesman for France’s Ministry of Sport said on Tuesday morning there would be “no exemption” for unvaccinated athletes or spectators at Roland Garros in May.

Back in Australia, however, Prime Minister Scott Morrison has left the door ajar for Djokovic to return despite the Serb’s visa cancellation carrying a three-year ban from re-entry.

The Coalition has been slammed by allies and foes over the drawn-out saga, with the Labor opposition branding the government’s stance “BS” and even some rogue Liberal MPs claiming the decision was “discrimination” against the unvaccinated athlete.

Multiple Morrison government ministers were out in the media on Monday to back the decision of Immigration Minister Alex Hawke to cancel Djokovic’s visa.

A band of supporters was at Belgrade airport to greet the world No.1 when he landed on a plane from Melbourne via Dubai.

But they saw little of the 34-year-old, who was whisked through passport control and customs. He was then driven by his brother Djordje to his apartment in Belgrade.

The ABC reports Djokovic was snuck out through a VIP entrance normally reserved for diplomats.

“God bless you Novak,” read one of the banners held by fans at Nikola Tesla Airport who chanted “You are our champion!”

“I think he entered history as a hero, as a man and as a fighter against this evil which is called corona-circus,” added Marko Strugalovic, 60, at Belgrade airport.

Djokovic is planning to take some time “to rest and to recuperate”.

Will he also take the time to get vaccinated?

If not, his unvaccinated status could cause further problems in his pursuit of a record-breaking 21st major.

France has barred unvaccinated people from sports venues, restaurants and other public places.

It’s unlikely Djokovic will be able to play the big ATP tournaments in Indian Wells and Miami in March because of the US’s’ tight restrictions.

His participation in the Monaco Open in April, the first event of Europe’s clay-court swing, would also be in danger since the tournament actually happens in France.

The Monte Carlo Country Club is 150 metres outside the principality in the French commune of Roquebrune-Cap-Martin.

Opportunity to return ‘in the right circumstances’

Djokovic is out of Australia but the debate about the nation’s handling of the tennis player will continue, while his ejection is again turning the spotlight on vaccine skeptics within the ranks of the Coalition.

Mr Morrison blamed Djokovic’s decision to remain unvaccinated against COVID-19 as the reason for his visa being cancelled.

“You want to come, you have to be vaccinated or you’ve got to have a valid medical exemption, and neither of those were in place,” he told 2GB radio.

“People make their own choices. And those choices meant you couldn’t come here and play tennis.”

However, Mr Hawke did not specifically cite Djokovic’s vaccination status in his statement of reasons for cancelling the visa.

Instead, the Minister raised fears that the tennis star’s presence in Australia could bolster anti-vaccination rhetoric, and said the decision was made on “health and good order grounds”.

“I consider that Mr Djokovic’s presence may pose a health risk to the Australian community, in that his presence may foster anti-vaccination sentiment,” Mr Hawke said in his submission to the court.

That would make Djokovic 37 before he could again compete at the Australian Open.

But Mr Morrison and Ms Andrews noted that this could be subject to change.

“I’m not going to sort of precondition any of that or say anything that would not enable the minister to make the various calls they have to make,” the PM told 2GB, when asked about the three-year ban.

“It does go over a three-year period, but there is the opportunity for them to return in the right circumstances and that would be considered at the time.”

Ms Andrews said the ban “can be dealt with at some stage in the future”, but said it could be re-examined.

“There are some compelling reasons that that may be able to be looked at, but that’s all hypothetical at this point. Any application will be reviewed on its merits,” she said.

‘Wolf to Novak, lamb to his own party’

The opposition has repeatedly slammed the government over the long-running Djokovic saga, claiming the fortnight-long episode was being drawn out by the Coalition as a distraction from surging COVID case numbers, rapid test shortages, and supply chain disruptions.

“Mr Morrison cannot pretend that he is a wolf, tough on Novak Djokovic, but a lamb in front of his own party room unwilling to tell people like George Christensen to pull their head in,” Senator Keneally said.

“In Australia, if you’re an Australian, you’re a citizen, you’re a resident and … you can be here and you can express your views. If you’re someone coming from overseas and there are conditions for you to enter this country, well, you have to comply with them,” he said.

But those same fringe Coalition voices have criticised the government, and spoken strongly in support of Djokovic, in recent days.

Senator Antic, who has spoken at anti-lockdown rallies and opposed vaccine mandates, told Serbian media that his government’s handling of the Djokovic case was “regrettable”.

“Power-hungry bureaucrats and a largely pedestrian media have fuelled fear in our community for two years,” he said on Facebook on January 15, after Mr Hawke’s initial visa cancellation but before the Federal Court upheld the ruling.

“Novak Djokovic is no threat to anyone in this country (other than his rivals in the Australian Open).”

Senator Rennick said on Facebook last week he was unhappy with the “politicalisation of Novak Djokovic by the federal government”.

He called it a “disgrace and an international embarrassment”.

Mr Christensen, retiring at the this year’s election, said on January 14 that he was “not happy about this decision” to cancel Djokovic’s visa.

He claimed it was “discrimination against non-vaccinated people”.