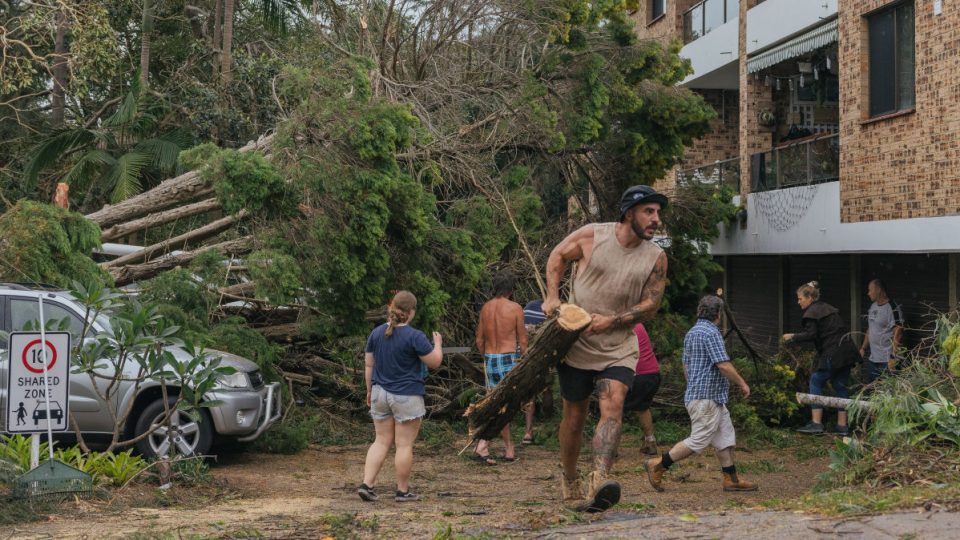 A fallen tree and powerlines during a storm has resulted in a fatality on Sydney's Northern Beaches. Photo: AAP

A woman has died and three people have been injured when a tree fell in a car park during a storm on Sydney’s Northern Beaches.

Emergency services received multiple reports of storm damage across the area from 3.30pm on Sunday, with trees and powerlines down across suburbs from Mona Vale to Forestville.

Police, NSW Ambulance paramedics, Fire & Rescue NSW, and rescue helicopters responded to the incident at a car park on Ocean Street, Narrabeen, after reports a tree and powerlines had come down.

A woman believed to be aged in her 70s died at the scene.

Police and emergency services are responding to multiple requests from the community for assistance following a severe storm on the Northern Beaches.

The community is urged to delay all non-urgent travel at this time.

Both were taken to Royal North Shore Hospital in a serious condition.

A young boy was also assessed for minor injuries but did not need to go to hospital.

“This was just a tragic scene to attend. These women were simply in the wrong place at the wrong time when this storm hit,” NSW Ambulance Inspector Christie Marks said in a statement.

“As you can imagine the patients had multiple injuries after being hit by falling branches and other debris.

“The strength of the storm is evident in the destruction it caused. Given the size of this tree it’s remarkable that there weren’t more people injured.”

Fire and Rescue NSW crews responded to more than 100 calls for assistance following the wild weather.

“The storm cell, described as a ‘mini-cyclone’, struck the area around 3.30pm,” FRNSW said in a statement.

“The wild winds ripped off sheets of metal from apartment building roofs, knocked other trees onto vehicles and roadways, and tore down powerlines from Dee Why to Narrabeen.”

It said a roof was ripped off a shopping centre in Forestville and a partial building collapse occurred in Curl Curl.

‘Australia votes for climate action’: How the world framed Labor’s victory as a win for the planet
Death toll in Hillcrest jumping castle tragedy rises to six
Today's Stories