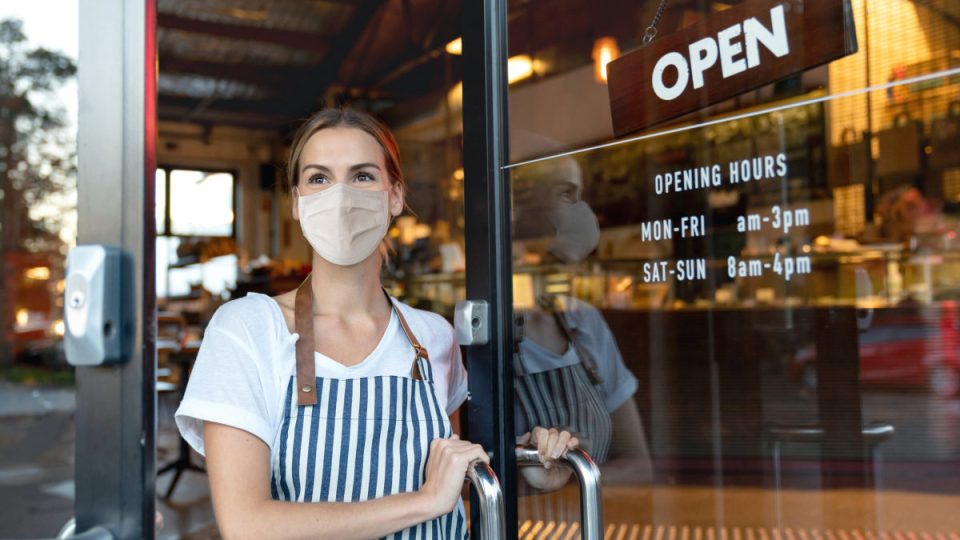 Leading epidemiologists have urged Australian leaders to hit the pause button on winding back basic COVID restrictions like masks and QR check-ins, warning the Omicron variant is a “curveball” to reopening plans formulated when dealing with less virulent virus strains.

“We know enough to know the situation in the next month or three is going to be worse with Omicron than it was with Delta,” warned Professor Brendan Crabb, infectious disease specialist at the Burnet Institute.

Why is Omicron a concern?

COVID’s Omicron variant is tearing through Europe, the United Kingdom and United States.

Northern hemisphere countries, which are battling a double whammy of lower vaccination rates and a cold winter, are reintroducing restrictions like density and gathering limits, mask rules and stronger isolation protocols.

However, in Australia, NSW and Victoria both eased rules on masks, vaccination status and check-ins this week.

Australia is set to reach a total 90 per cent double-vaccination rate for 16+ population this week, and the summer period is considered less danger for COVID risk.

But authorities are warning that the Omicron variant – vastly more transmissible than previous strains – could cause havoc over the Christmas holiday period, at parties and gatherings.

Already many thousands of people across NSW are in isolation due to attending venues of concern, and the state clocked its highest-ever case number on Thursday.

There is also concern that two doses of COVID vaccine is far less effective against contracting Omicron, with booster shots vital.

Omicron is considered, from initial studies, to be more mild than Delta.

Rising case numbers have also not yet translated into corresponding numbers of serious illness, with health authorities stressing two doses of vaccine is still strongly effective against serious illness and death.

The World Health Organisation is warning countries “not to panic but to prepare for its likely spread”.

“I have no idea where this could go, given we are relaxing things,” University of Melbourne epidemiologist Professor Nancy Baxter told the ABC.

“When you look at Europe and Canada, they are increasing their restrictions, not decreasing them now that they are seeing Omicron coming.

“There is nowhere else in the world that has decided to say ‘we have this new variant coming that seems to spread much faster, so let’s relax restrictions’.”

Alexandra Martiniuk, professor of epidemiology at the University of Sydney, said it was rare for Australia to be less COVID cautious than other nations.

“It’s unusual for us to be diverging from the rest of the world in a way that puts us on a path that looks more dangerous,” she told The New Daily.

“We’ve diverged from others before, but always on the path of being more precautionary – now we’re doing the opposite.

“Australia has made great choices, so let’s think about the pros and cons of doing this.”

Professor Martiniuk recommended keeping health rules until after Christmas, when more data would be available.

“We have to hold on. The new data coming out of South Africa shows increasing hospitalisations. We can keep these health protections like masks and contact tracing – not forever but while we learn about Omicron,” she said.

“We all know society needs a break. It’s hard to stay careful. We also know if you let it run too much, it makes people lives hard and people die in the process. It seems unwise.”

Professor Crabb said it was “understandable” that, considering Australia’s world-leading vaccination rates and the summer holidays following months of lockdown, that people would be keen to see rules relax.

However, he cautioned the modelling and medical advice that underpinned the national reopening plan was based on the Delta strain; whereas Omicron, while being less deadly, was “phenomenally” more infectious.

“Let’s hope it is less severe. But it would have to be a lot, lot less severe than Delta to counteract the increased transmissibility of Omicron,” he told TND.

“We had plans for Delta. Those are no longer relevant, because we have Delta plus Omicron.

“We have to ask, ‘What needs to change to combat that extra challenge?’ The earlier and faster we act gives us the best chance of not overwhelming the healthcare system, and leading to lockdowns.”

However, he recommended “non-restrictive” interventions like maintaining mask wearing, QR code check-ins and social distancing be kept, until further data showed how much more mild Omicron really was, compared to its transmissibility.

“In the end you worry about how many people get really sick. If it’s a small percentage of a much larger number, it can still be a much larger total number in hospital,” Professor Crabb warned.

“It’s not catastrophising to say we’ve got a new, worrying, unpredictable virus in the world.

“It’s a fact that needs to be met head on with different policy settings. You can’t have business as usual when faced with such a sudden curveball.”

‘You can choose to stay home’: Morrison

On Thursday, Mr Morrison again urged Australians to get a booster shot, saying federal medical regulators were reviewing time frames and may move it forward to four months after a second dose, from the current five.

But the PM also warned “our own health is our own responsibility”, flagging he didn’t back continuing health restrictions.

“Omicron will be here in this country. It is already here,” he said.

She suggested a better prioritisation system for those people most at risk, and those who had received AstraZeneca, which is showing less efficacy against contracting Omicron.