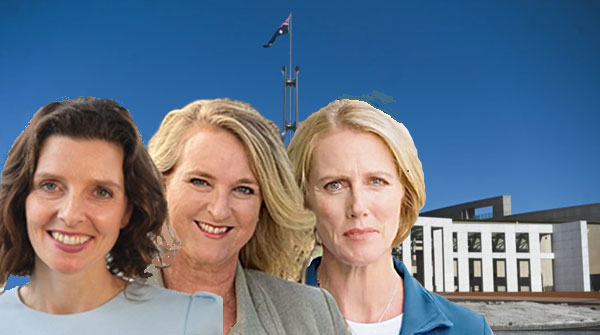 At the 2013 election, Cathy McGowan made history when she toppled Liberal frontbencher Sophie Mirabella to become the first independent member for the north-east Victorian electorate of Indi, and the first female independent crossbencher.

Her advocacy on climate and integrity issues won her strong support, and paved the way for fellow independent Helen Haines to replace her in the federal Parliament.

Ahead of next year’s election, several independent candidates have announced their intention to challenge seemingly impenetrable Liberal seats.

They say voters are frustrated by the Morrison government’s response to climate change and delays introducing a federal integrity body, and they believe independent candidates have a good chance of tapping into that discontent.

So who are these candidates and what moves them to take on the challenge?

Former ABC foreign correspondent Zoe Daniel says she never considered a career in politics until she asked by a residents group, Voices for Goldstein, to be their endorsed candidate for the Melbourne bayside seat.

Ms Daniel, who until recently was a columnist for The New Daily, will take on Assistant Energy Minister Tim Wilson – the candidate she voted for at the 2016 election.

“I think my vote in 2016 was pretty much a vote for (former prime minister) Malcolm Turnbull because he came into the prime ministership on a platform of effective climate policy and forward-thinking economic management,” she says.

“In the intervening six years, it’s just become more and more clear to me that voting for a Liberal candidate in this electorate is just a dead vote.

“It doesn’t give us a voice at all because even if that person purports to be a moderate, they vote with the National Party every time.”

Goldstein has been a Liberal-held seat since its inception in 1984.

But Ms Daniel, who is backed by Fraser-era immigration minister Ian Macphee, says in recent years voters have become increasingly frustrated by the party’s climate policies.

The Hampton resident wants to cut greenhouse gas emissions in half by 2030 – a goal she says is “gettable with the work that states and business are doing”.

Ms Daniel also wants to set up a federal integrity body “with teeth”.

“We need to be leading in this field, not lagging in the way we are now,” she says.

After a 30-year career in advocacy and communications, Kylea Tink wants to topple progressive Liberal MP Trent Zimmerman to win the affluent seat of North Sydney.

The “economically conservative and socially progressive” independent candidate is a former McGrath Foundation and Camp Quality chief executive, and is campaigning for stronger emissions reductions targets, a federal ICAC and gender equality.

“I am more and more convinced that this is a system that needs to be disrupted and reset so that it is the community’s voice driving the agenda at the federal level, rather than the party’s voice or voices of vested interest groups,” Ms Tink tells The New Daily.

North Sydney has been held by the Liberals since 1996, when former Howard and Abbott minister Joe Hockey defeated independent Ted Mack.

Ms Tink says North Sydney voters are frustrated by the Coalition’s delay in introducing legislation to set up a federal anti-corruption commission, despite promising to do so in 2019.

“Most of my career has been spent in commercial environments and I’m sure that I’m not the only working Australian that looks at some of the behaviour that’s happened in that federal Parliament House in the last six years and just cannot believe that it’s been acceptable,” she says.

“People say it’s bizarre that independents want to challenge moderate voices in the Liberal Party, but what I think is bizarre is they actually lose their voice whenever there’s an issue that matters, whether it’s integrity or climate.”

On the other side of Sydney Harbour in the seat of Wentworth, Allegra Spender is challenging Liberal backbencher Dave Sharma, who holds the electorate with a margin of just 1.3 per cent.

Ms Spender comes from a blue-ribbon Liberal family. Her father, John, held the seat of North Sydney from 1980 to 1990, and her grandfather was a Liberal MP for Warringah.

“The main reason I’m running as an independent and not a Liberal is because I think the community values and my values are really out of step with the federal Coalition,” she says.

“That’s particularly around aspects of climate – and that’s both the economic opportunity it presents to business as well as the environmental aspect.

“I’m really committed to wanting to keep global warning to 1.5 degrees and the policy settings we have right now are not going to deliver that.”

She says she also has connections with former independent Wentworth MP Kerryn Phelps, who held the seat for one year before she was defeated by Mr Sharma at the 2019 election.

“Kerryn used to be my mum’s doctor, so I’ve known Kerryn for a long time,” Ms Spender says.

“She’s been really publicly supportive of an independent in Wentworth and I’ve talked to Kerryn about the local environment and the local community, and what’s important for them.”

Ms Spender says she hasn’t spoken to Ms Daniel or Ms Tink about their campaigns, despite acknowledging they share similar policy platforms.

“The reason we’re all running on similar agendas is because there are similar frustrations,” she says.

“I think I saw it in the media yesterday that we are a coalition of independents and it’s absolutely not.

“We’re all running our own campaigns.”