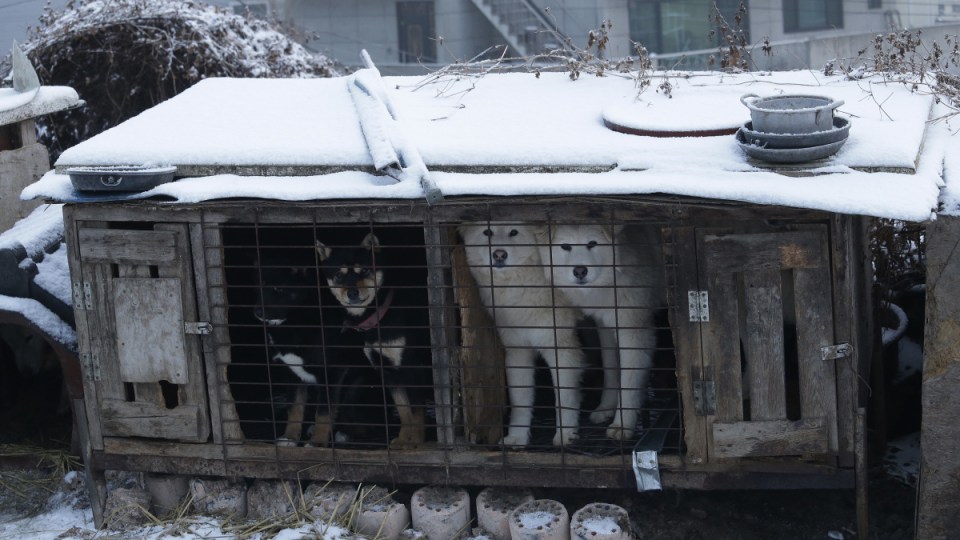 Up to 1.5 million dogs are killed each year for food in South Korea, but the number is decreasing. Photo: AP

South Korea will launch a task force to consider outlawing dog meat consumption, about two months after the president offered to look into ending the centuries-old eating practice.

Restaurants that serve dog meat are a dwindling business in South Korea as younger people find dog meat a less appetising dining option and pets grow in popularity there.

But recent surveys indicate more people oppose banning dog meat even if many don’t eat it.

In a joint statement, seven government offices including the Agriculture Ministry said they decided to launch the group comprising officials, civilian experts and people from related organisations to deliver its recommendations on possibly outlawing dog meat consumption.

It said authorities will gather information on dog farms, restaurants and other facilities while examining related public opinions.

It would be South Korea’s first such initiative, but the government has said its launch doesn’t necessarily guarantee the banning of dog meat.

Farmers say the task force’s launch is nothing but a formality to shut down their farms and dog meat restaurants, while activists argue the government’s announcement lacks a resolve to outlaw dog meat consumption.

About 1 million to 1.5 million dogs are killed each year for food in South Korea, a decrease from several millions about 10 to 20 years ago.

Thousands of farmers currently breed a total of about 1 to 2 million dogs for meat in South Korea.

In September, during a meeting with his prime minister, President Moon Jae-in, a dog lover, asked “if it’s time to carefully consider” a ban of dog meat consumption, sparking a fresh debate over the issue.

Dog meat is neither legal nor explicitly banned in South Korea.