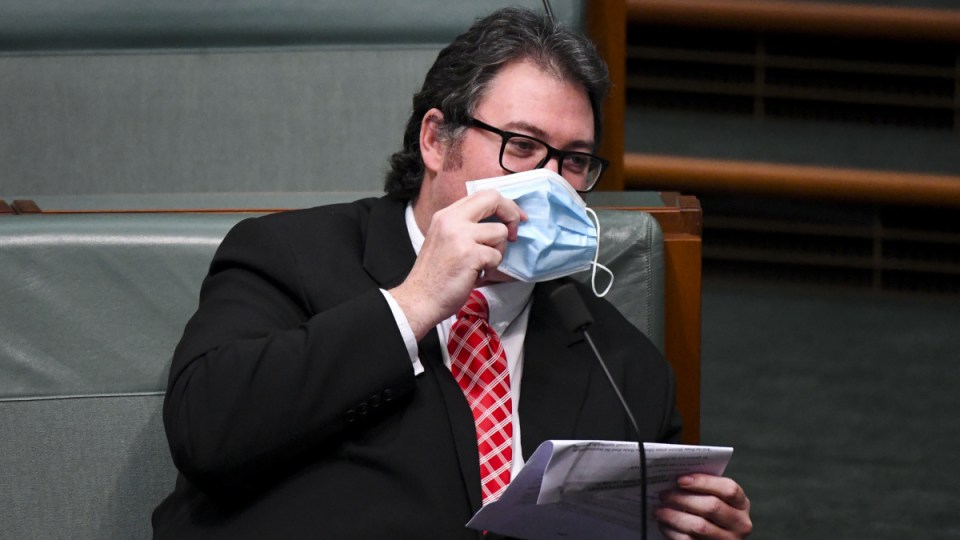 George Christensen is stepping down as a committee chair after making new anti-vaccination comments. Photo: AAP

Controversial Coalition MP George Christensen is under fire from inside his own party, with Nationals deputy leader David Littleproud flatly condemning his colleague’s call for “civil disobedience” over vaccine mandates.

Mr Christensen, who crossed the floor to oppose a government motion and appeared to compare vaccine mandates to the murderous dictatorial regimes of Hitler and Pol Pot on Wednesday, has refused to back down despite yet another explosion of parliamentary outrage at his actions.

Mr Christensen has since denied comparing state premiers to the 20th-century despots, despite claiming in a speech in the House of Representatives on Wednesday they were “racing down that familiar path”.

“I don’t respect those comments and I condemn them,” Mr Littleproud said on Thursday morning.

“I’ve tried to reach out to make my views clear to him.”

Mr Christensen, the LNP member for the Queensland seat of Dawson, spoke on Wednesday in opposition to state vaccine mandates. He alluded to the “totalitarian regimes” of Stalin, Mao, Hitler and Pol Pot, comparing state and territory leaders to the murderous leaders.

Several Coalition senators have broken with the government’s position to oppose vaccine mandates this week, including five who backed a One Nation motion.

On Wednesday, Mr Christensen said people who intentionally opted out of vaccination were being “demonised, ostracised and socially eradicated”, and claimed the solution was civil disobedience.

His comments were slammed by Labor. Asked about Mr Christensen’s comments in question time, Prime Minister Scott Morrison said that he would “condemn any encouragement whatsoever, by any person in any place, regarding acts of civil disobedience”.

“As a son of a police officer, I believe that everyone should obey the law,” Mr Morrison said.

However, he did not specifically mention Mr Christensen.

Pressed by Labor leader Anthony Albanese to specifically condemn the Queensland MP, Mr Morrison said “I do condemn those statements”. But he quickly moved on to note 2017 comments from union leader Sally McManus, who said “when [the law] is unjust I don’t think there’s a problem with breaking it”.

On Thursday, Mr Littleproud gave a press conference in Parliament House. Asked about Mr Christensen, a member of his Nationals party, Mr Littleproud offered the strongest rebuke yet from the government benches.

He said he hadn’t spoken to Mr Christensen directly, but that he believed the MP dined with Nationals leader and Deputy Prime Minister, Barnaby Joyce, on Wednesday.

Mr Joyce has previously resisted pressure to pull the increasingly rogue Mr Christensen into line, admitting he could not “control” him.

Not long after Mr Littleproud’s criticism, Mr Christensen sought to make a “personal explanation” in the House of Representatives to claim he had been misrepresented.

“This is to refer to reports and claims that I directly compared state premiers to Stalin, Mao, Hitler and Pol Pot. I wish to inform the House I did not. I said the path that they’re on was troubling,” he said.

“There’s been false claims in the Senate, on social media and elsewhere, that I called for, and/or incited violence. I did no such thing. Never did. Never would. I abhor violence.”

However, as clearly recorded in the parliamentary Hansard, Mr Christensen mentioned Stalin, Mao, Hitler and Pol Pot, and claimed “state premiers are racing down that familiar path, trying to out-tyrant each other”.

He also referred to Queensland Premier Annastacia Palaszczuk as a “despot” in a post on his Telegram channel two weeks ago.

On Wednesday night, as criticism of his speech swirled, Mr Christensen posted video of the address to Telegram. He wrote “yes, I called for civil disobedience in the parliament today”.

“Civil disobedience is not violence on the streets – it’s the refusal to comply with certain laws considered unjust, as a peaceful form of protest,” he said.

Earlier this year, Mr Christensen was officially censured by the House of Representatives after claiming “masks do not work” against COVID and blasting “dictatorial medical bureaucrats”.