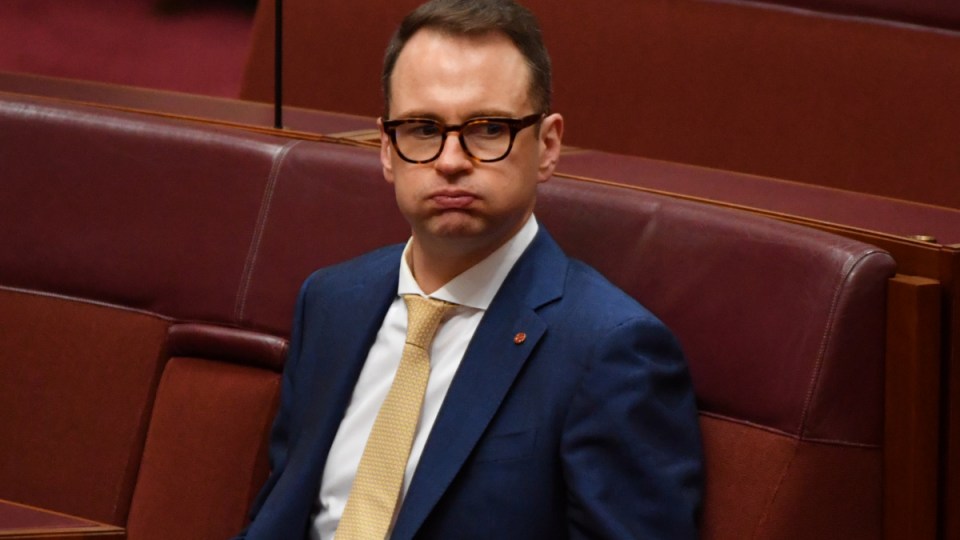 The Liberal senator behind a controversial inquiry into the ABC and SBS warns he is planning “additional steps” to scrutinise the national broadcasters after his initiative was suspended in a Senate backlash.

The parliamentary vote which narrowly passed to halt the inquiry could even be overturned on Wednesday, after maverick Coalition member Gerard Rennick – who abstained from the initial vote – said late on Tuesday he would try to have his vote counted after all.

Senator Andrew Bragg, chair of the Senate’s communications committee, announced an inquiry into complaints handling procedures at the taxpayer-funded ABC and SBS earlier this month.

The inquiry was suspended on Tuesday after Greens senator Sarah Hanson-Young and Labor senator Katy Gallagher co-sponsored a motion calling for it to be halted.

“It sets a terrible precedent for the Senate to close public access,” said Senator Bragg, shortly after the upper house voted to put a pin in his inquiry.

“Motions considered by the Senate to silence Australians are very troubling. It raises further questions.”

Senator Bragg had previously claimed complaints “are not being seriously addressed” by the broadcasters, alleging they were not doing enough to “swiftly resolve” editorial errors.

Prime Minister Scott Morrison backed the inquiry, saying the ABC was “not above the scrutiny of how they conduct themselves using taxpayers’ money”.

But the move earned a withering rebuke from ABC chair Ita Buttrose last week, who accused Senator Bragg and the Coalition government of over-reach and trying to “undermine” the broadcaster’s independence.

“This is an act of political interference designed to intimidate the ABC and mute its role as this country’s most trusted source of public interest journalism,” Ms Buttrose said.

She pointed out the ABC had already commissioned an independent review of complaints handling and editorial policies.

Ms Buttrose demanded the Senate suspend its inquiry to allow the review to occur.

Coalition senator Jonathon Duniam, speaking before Tuesday’s motion to suspend the inquiry went to a vote, said the government believed “no publicly funded entity is above the scrutiny of the Senate”.

“The independence of the ABC is enshrined in legislation. Parliament has guaranteed this independence so that the ABC’s decisions are free of political interference,” he said.

The motion to suspend was narrowly passed 23-22, with only government senators voting against it. Senator Rennick, currently in a dispute with his own government over vaccines, did not vote.

It means the inquiry will be halted, at least until the ABC’s independent review is completed.

Ms Buttrose said the ABC expected the review would be released in April – around the time a federal election is expected to be held.

“This inquiry was a partisan attempt to use the Legislation Committee to undermine the independence of the public broadcaster,” Senator Sarah Hanson-Young said.

She, too, alleged the inquiry would have been “political interference” and an “attack” on the ABC.

Senator Gallagher tweeted that her motion was designed to “protect the independence of the ABC”.

But late on Tuesday, hours after the vote passed, Senator Rennick told the Senate he wanted to have his vote “recommitted” to the govenrment’s side. That process could potentially see the vote counted again on Wednesday, if the Senate accepts his protest.

If Tuesday’s numbers hold, Senator Rennick’s number would make the final tally 23-23, meaning the motion would be unsuccessful, and potentially allow Senator Bragg’s inquiry to continue after all.

Senator Bragg hinted at further plans to enhance the scrutiny of the public broadcasters.

“Restricting community access to the Senate committees is a backward step for our democracy,” he said after Tuesday’s vote.

“I respect the Senate’s right to do so, but reserve my right to undertake additional steps. The inquiry has already received several sensitive but critical submissions. We must not close the door on these Australians.”

The inquiry has only published one submission on its website so far.

Senator Bragg claimed the Senate inquiry would have been stronger than the ABC’s independent review, raising concerns that the broadcaster’s process would not have public hearings or enjoy the protection of parliamentary privilege.

“It sets a terrible precedent for the Senate to close public access, especially where more than a dozen submissions have already been received as evidence,” he said.

The renewed scrutiny on the ABC comes after sustained public complaints from state and federal politicians about reporting on its Ghost Train series, which made a historical allegation about former New South Wales premier Neville Wran, and ABC investigations into alleged sexual misconduct and assault issues in politics.