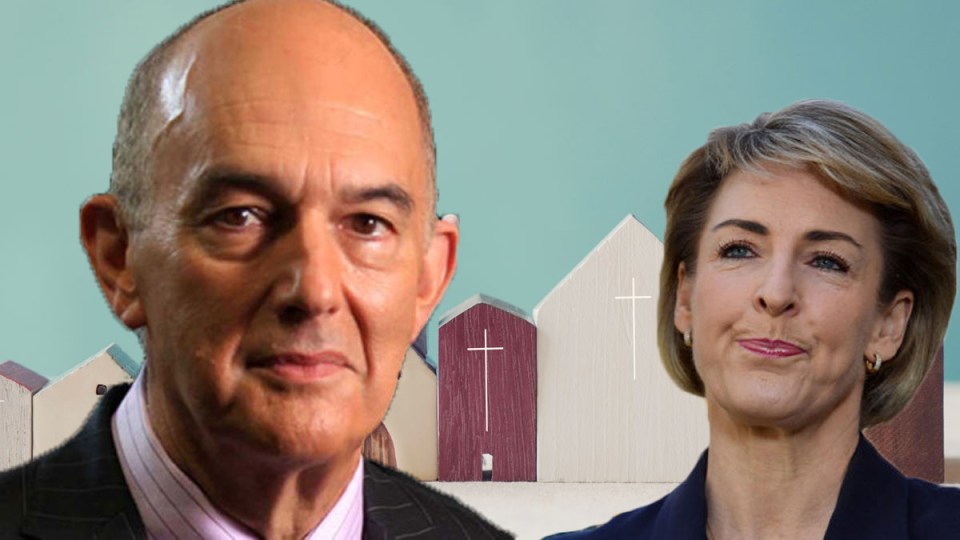 Today she will take her twice-revised religious discrimination bill to the government party room for approval.

Senator Cash is confident she has walked the fine line between guaranteeing the freedom of religious believers to discriminate in their beliefs against Australians who are not heterosexuals and the rights of these Australians.

The whole exercise is fraught because any idea that freedom of religion does not already exist in Australia is absurd, and all sides of politics in Canberra know it.

A sure-fire indication that this is the case is the length of time it has taken for Scott Morrison to deliver on a promise he first made in December 2018 to establish a Religious Discrimination Act and appoint a Religious Freedom Commissioner within the Human Rights Commission.

In the meantime, religious schools have hired and fired who they will and the 10 per cent of Australians who regularly worship have until the COVID-19 pandemic intervened done so without hindrance.

Oh, and there is one other promise Mr Morrison made in the heat of the Wentworth byelection in October 2018 to introduce a bill within weeks to prevent private schools from expelling students because of their sexual orientation.

No more has been heard of it.

Though the Ruddock Review recommended highly qualified protocols to discourage such expulsions, so far this has not been taken up.

The genesis of all this concern about religious freedom and human rights was the overwhelming support Australians gave to marriage equality in the September 2017 plebiscite.

The religious right, particularly the Australian Christian Lobby and its supporters in the Liberal and National parties, so spooked then prime minister Malcolm Turnbull that he set up the Ruddock inquiry into the ramifications for churches of this clear expression of mainstream acceptance of the rights of lesbian, gay, bisexual, transgender, intersex and queer/questioning (LGBTIQ) Australians.

Boiled down it means the ACL and other religious leaders wanted cast-iron guarantees that they could discriminate against these Australians with impunity.

The replacement of Mr Turnbull as prime minister by Scott Morrison, who abstained from the parliamentary vote rather than support the 55 per cent yes vote in his electorate of Cook, gave the conservatives new heart.

But he has met fierce pushback from within the government and even today there is no guarantee that Senator Cash’s efforts will be waved through without intense scrutiny.

One of the proponents of the successful marriage equality bill, veteran Liberal backbencher Warren Entsch tells me he doesn’t feel comfortable allowing any group to discriminate against minorities.

There are real fears that the hard-won delegitimising of homophobia could be reversed.

Mr Ensch is adamant “that’s not going to be allowed to happen”.

There is a fair bit of support for Mr Entsch’s view in the party room that the bill should be sent off to a Senate committee for vetting.

Another Liberal MP Russell Broadbent, who voted no in 2017 but is sympathetic to Senator Cash’s solution, is similarly wary of “unintended consequences”.

If the Attorney-General is proud of her work, she has been mighty shy about it.

It wasn’t until Sunday night that she showed the bill to Labor’s Mark Dreyfus. Others who have been briefed were not allowed to see the legislation.

Melbourne’s Catholic Archbishop Peter Comensoli is keen for a bipartisan bill to pass the Parliament and there are strong indications Labor is not looking for a fight on the issue.

However, some Labor hardheads are convinced if the Prime Minister could weaponise the issue by painting the Opposition as being anti-religion he would.

Labor MPs, particularly in Western Sydney, believe this contributed to swings against them at the last election.

But if we take the politics out, it’s hard to disagree with David Marr in The Guardian who baldly states that the religious discrimination bill is “designed to let the churches be nasty: Nasty to children, to employees of the faiths and nasty in the pulpit”.

There is one pulpit where this charge does not apply: The one occupied by Jesuit priest and lawyer Frank Brennan.

Father Brennan was on Philip Ruddock’s expert panel and told his congregation last Sunday that Catholics are entitled to conduct their institutions consistent with Church teaching “but not in a manner which discriminates adversely against those of a different sexual orientation”.

He says, “we should treat them in the same manner as those of a heterosexual orientation”.

The priest/lawyer says a simple statement in a Bill of Rights, similar to New Zealand’s, recognising freedom of religion is all that’s needed.

He says the current lack of such an arrangement leaves the perception seized on by Marr that “religious folk are always engaged in special pleading wanting to discriminate adversely against others”.