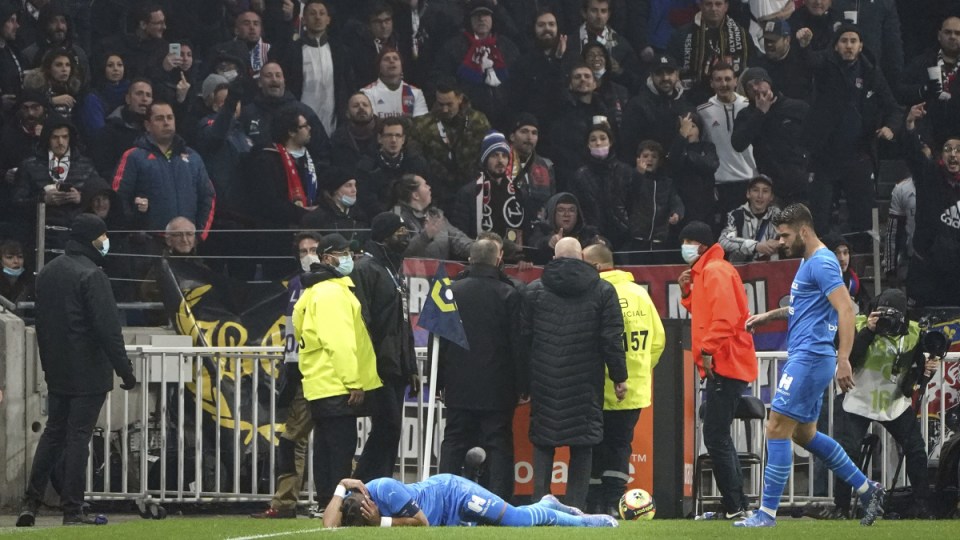 Marseille's Dimitri Payet lies on the ground after being hit by an object thrown by a Lyon fan. Photo: AP

French sports minister Roxana Maracineanu has called for tough sanctions after the latest violence in French football led to the Ligue 1 game between Lyon and Olympic Marseille being abandoned.

The game on Sunday night was stopped in the fourth minute when Marseille’s Dimitri Payet was hit on the head by a full water bottle thrown from the stands while trying to attempt a corner kick.

The game was eventually abandoned as the Marseille team did not feel safe to return.

“What happened in Lyon is not acceptable. We can not tolerate that players are attacked in this way. Such incidents must at least lead to the games automatically being abandoned,” Ms Maracineanu tweeted late on Sunday.

Repeated crowd problems in Ligue 1 are putting the future of French soccer at risk, French sports minister Roxana Maracineanu said after Sunday's game between Olympique Lyonnais and Olympique Marseille was abandoned due to fan violence. https://t.co/HenSrrfaoU

“First of all I am thinking about the player who was attacked. Dimitri Payet has my full support.”

“We need sanctions and a general, immediate and radical raising of awareness for all parties in football.”

The French league has called a emergency meeting for Monday to decide on the latest bout of violence that has plagued French football in the season.

Most notably, Marseille’s game with Nice in August was stopped due to fan problems after Payet was hit by a bottle and threw it back into the stands.

There has also been crowd trouble at games hosted by Montpellier, Angers, Marseille and Saint Etienne.