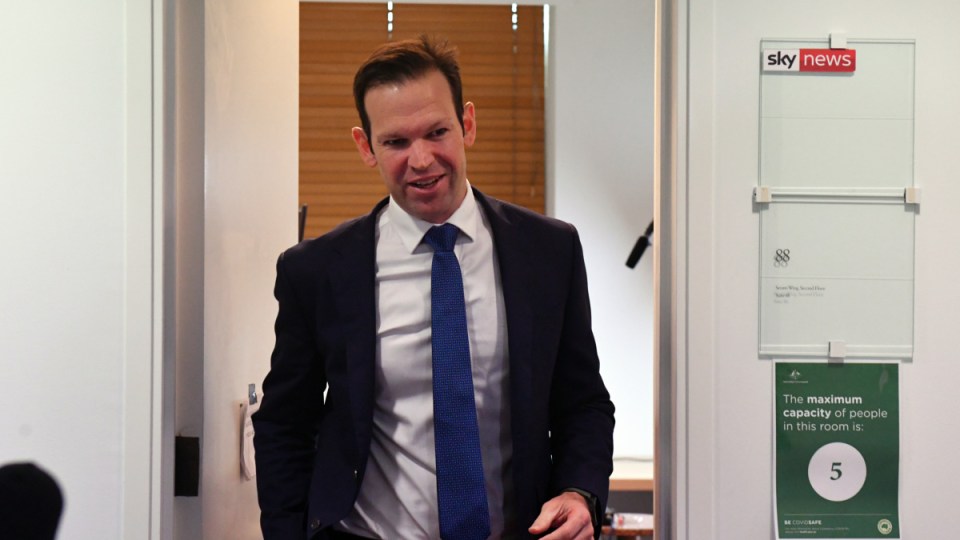 The federal government faces further unrest in its own ranks as anger over vaccine mandates spills into the lower house, with rogue MPs to issue a list of demands, including for Prime Minister Scott Morrison to stand up to state premiers.

After five Coalition senators crossed the floor to back a One Nation motion on Monday, maverick Nationals backbencher George Christensen, former Liberal MP Craig Kelly and reliable government supporter Bob Katter are all threatening to oppose the government in the House of Representatives.

The split could derail the Coalition’s plans for the final sitting fortnight of the year, with the Morrison government potentially losing majority support in both houses of parliament, and moderate Liberals urging the disgruntled conservatives to not split.

“The fight for us is not over,” Nationals Senator Matt Canavan said on Tuesday.

After he backed One Nation leader Pauline Hanson’s push for new “anti-discrimination” protections for the unvaccinated on Monday, Senator Canavan claimed a growing number of rogue Coalition members had the same concerns. He said the splinter group was discussing the “next steps” in their push to end vaccination mandates, and suggested Mr Morrison should block states having access to vaccine certificate information from federal databases.

“I do believe there remains opportunities for the Australian government and the Prime Minister to pressure state and territory governments to back down,” Senator Canavan said.

On Monday, he and fellow Coalition senators Gerard Rennick, Alex Antic, Concetta Fierravanti-Wells and Sam McMahon crossed the floor of the upper house to back the One Nation bill.

The pitch was voted down 44-5, with all other government members opposing it.

The unrest isn’t likely to end in the Senate. On Monday night, Mr Christensen threatened to become the first lower house Coalition member to withhold his vote because of the government’s position on vaccine mandates.

In an email newsletter to supporters, Mr Christensen said he’d told Nationals leader Barnaby Joyce that he would “not be beholden to party room discipline when voting in the House of Representatives”.

“To be clear, until federal action is taken against vaccine discrimination, I will be voting according to my conscience (or abstaining from votes) on bills and substantive motions rather than just voting with the government as MPs usually do,” Mr Christensen wrote.

The threat has sparked criticism from fellow Coalition MPs, with Victorian MP Dr Katie Allen urging Mr Christensen to “pick up the phone to the Prime Minister to go and speak to him about what these issues are that he may be concerned or not concerned about”.

“In politics, it’s hot and it’s contested,” she said.

“There’s no doubt there’s a lot of things that are going on at this point in time.”

Crossbenchers Mr Katter and Mr Kelly have also flagged that they will consider abstaining from votes in the lower house, according to reports in The Australian.

Records show senators Rennick and Antic voted in no further divisions on Monday, after supporting One Nation’s vaccine proposal, effectively following through on their threats to withhold their votes from the government.

On Tuesday, Senator Canavan vowed to continue pushing against the vaccine mandate, but said he was not planning to withhold his support for government legislation. The unhappy Coalition MPs are considering issuing a list of freedom demands to Mr Morrison, but Senator Canavan said he wouldn’t issue “threats”.

“Many of my colleagues in the Liberal National Party don’t want to see a free Australia disappear,” he said.

The weight of numbers against the government could force Mr Morrison’s hand on key pieces of legislation, including voter ID laws and the long-awaited religious discrimination bill.

Senator Canavan said he was “not making any suggestion” that he would vote against the bill, which he claimed would not be up for a vote this sitting fortnight.

“There’s a bit of water under that bridge first to flow,” he said.

‘Fight for us is not over’: Coalition split grows over vaccine mandates