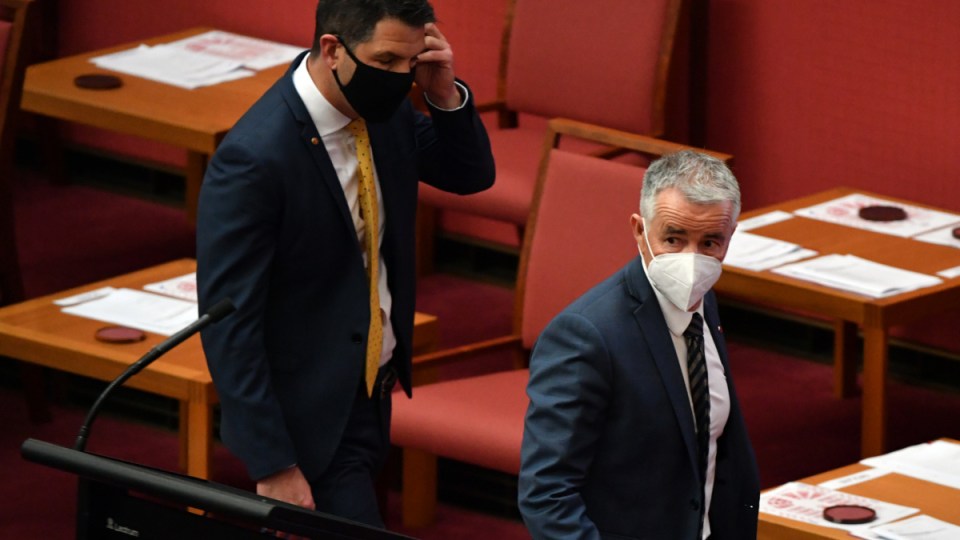 Coalition senator Gerard Rennick is sticking to his threat to stop voting with his party if it doesn’t end vaccine mandates, as a growing group of rogue MPs plunge the Morrison government into potential chaos during the final sitting weeks of the year.

The government is seemingly resigned to not having numbers to pass controversial legislation for the rest of the year, hinting that contested legislation on religious discrimination and voter identification may be delayed.

But Senator Rennick has hinted he may back down on his ultimatum, saying he was “prepared to be flexible” over his demands for Prime Minister Scott Morrison to stand up to state premiers, and admitting he wouldn’t quit the party over the issue.

“I feel as though a lot of people have been held to ransom by the Parliament, so I’m happy to negotiate,” Senator Rennick told the ABC on Tuesday.

The Queensland senator was one of five Coalition members who crossed the floor on Monday to back a One Nation push for new “anti-discrimination” protections for the unvaccinated.

He and fellow Coalition senator Alex Antic vowed to withhold their vote from the government in the Senate.

On Tuesday, maverick Nationals backbencher George Christensen made the same threat in the House of Representatives.

In an email newsletter to supporters on Monday, Mr Christensen said he would “not be beholden to party room discipline when voting”.

“Until federal action is taken against vaccine discrimination, I will be voting according to my conscience (or abstaining from votes) on bills and substantive motions rather than just voting with the government as MPs usually do,” Mr Christensen wrote.

Crossbenchers Bob Katter and Craig Kelly have also flagged that they will consider abstaining from votes in the lower house, according to reports in The Australian.

Rogue Coalition MPs have flagged sending a letter to Mr Morrison with a list of their demands.

The widening fracture could derail the Coalition’s plans for the final sitting fortnight of the year, with the Morrison government potentially facing a loss of majority support in both houses of Parliament.

Moderate Liberals are urging the disgruntled conservatives to not split from the party.

Senator Canavan said he didn’t expect a vote on the contentious religious discrimination bill this year, even with Scott Morrison pledging to introduce the legislation on Thursday.

Senator Rennick said he was still committed to withholding his vote from the government, but in a surprising revelation, he claimed senior ministers arranged for him to meet constitutional lawyers to discuss what powers the government has to override state-imposed vaccination mandates.

The Coalition senator said he still had no assurances from the Prime Minister, but said he was “still hoping to get some outcomes” by speaking to lawyers.

“I think the federal government does have constitutional powers under the Constitution to be responsible for the vaccine rollout,” he claimed.

It comes after several Coalition MPs told a party room meeting on Tuesday that they had concerns about state premiers enforcing vaccine mandates.

One called on the Coalition to show “teamwork” and listen to backbencher concerns.

After backing the One Nation push for new “anti-discrimination” protections for the unvaccinated on Monday, Senator Canavan vowed “the fight for us is not over”.

“I do believe there remain opportunities for the Australian government and the Prime Minister to pressure state and territory governments to back down,” Senator Canavan said.

Meanwhile, Labor and the crossbench tested the numbers in the Senate by trying to bring on debate about a national integrity commission.

The push resulted in a tied vote after One Nation sided with the government, despite not being present in the chamber.

The fallout from Monday’s debate on vaccine mandates continued on Tuesday, with Tasmanian senator Jacqui Lambie blasting One Nation for “crossing a line” by publishing her personal phone number on social media.

Senator Lambie told the Senate that she would have to change her number, accusing One Nation senator Malcolm Roberts of sharing a post with her contact details on Facebook.

One Nation responded by claiming the party didn’t “leak” Senator Lambie’s details, citing occasions where she had previously posted her number online.

However, a spokesperson also said Senator Roberts didn’t condone the publishing of private or confidential details, and had removed the post.