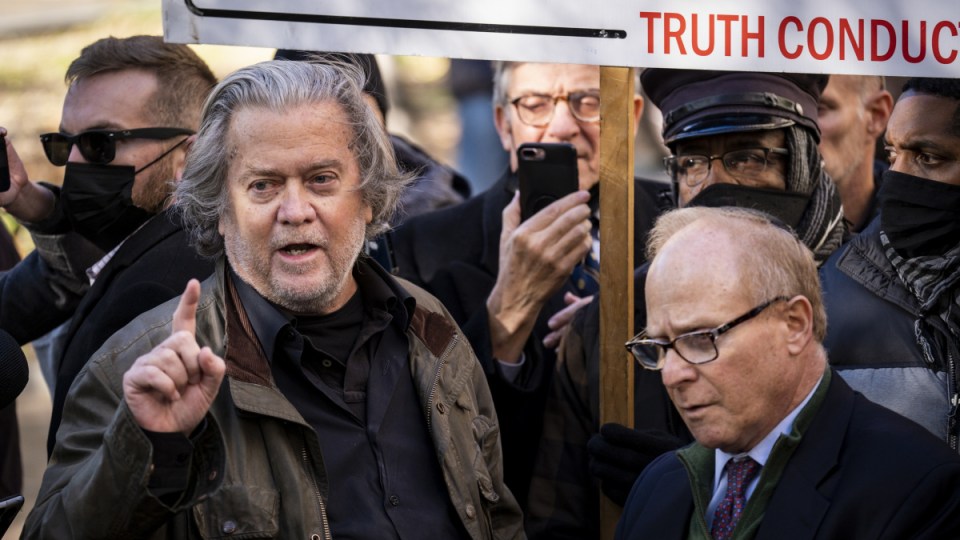 Longtime Donald Trump ally Steve Bannon has declared he is “taking on the Biden regime” after facing criminal contempt charges for ignoring a subpoena from a House committee investigating the January 6 attack on the US Capitol.

Bannon did not enter a plea on Monday and is due back in court on Thursday for the next phase of what could be the first high-level trial in connection with January’s insurrection.

Combative outside court, he said he was “going on the offence” against the attorney general, the speaker of the House, and President Biden.

“This is going to be a misdemeanour from hell for Merrick Garland, Nancy Pelosi and Joe Biden,” he said.

The 67-year-old Bannon surrendered earlier in the day to FBI agents.

He was indicted on Friday on two federal counts of criminal contempt – one for refusing to appear for a congressional deposition and the other for failing to provide documents in response to the committee’s subpoena.

Judge Robin Meriweather released Bannon without bail but required him to check in weekly with court officials and ordered him to surrender his passport.

If convicted, Bannon faces a minimum of 30 days and a maximum of one year behind bars on each count, prosecutors said.

The indictment came as a second expected witness, former White House chief of staff Mark Meadows, defied a separate subpoena from the committee on Friday and as Trump has escalated his legal battles to withhold documents and testimony about the events on January 6.

Bannon and Meadows are key witnesses for the committee because they both were in close touch with Trump around the time of the Capitol attack.

If the House votes to hold Meadows in contempt, that would also be sent to the Justice Department for a possible indictment.

Meadows was Trump’s top aide at the end of his presidency and was one of several people who pressured state officials to try and overturn the results of the 2020 election, won by Biden.

Bannon promoted the January 6 protests on his podcast after predicting the day before “all hell is going to break loose”.

The committee said Bannon urged Trump to focus on the congressional certification and was present at an event at the Willard Hotel on January 5 in which Trump allies tried to persuade members of Congress to vote against the results.

Bannon’s lawyer, David Schoen, said his client did not appear before Congress because he was told by another lawyer not to come after Trump claimed executive privilege would apply.

“Mr Bannon is a lay person. When the privilege has been invoked by the purported holder of privilege, he has no choice but to withhold the documents,” Schoen said.

“You can’t put the genie back in the bottle.

“Mr Bannon acted as his lawyer counselled him to do by not appearing and by not turning over documents in this case. He didn’t refuse to comply.”

The indictment says Bannon did not communicate with the committee in any way from the time he received the subpoena on September 24 until October 7, when his lawyer sent a letter seven hours after the documents were due.

‘Justice for Benedict’: Why Bridgerton’s third season is straying from the books in a major way
‘Sick and scary’: Condemnation of gallows at anti-Andrews protests
Today's Stories