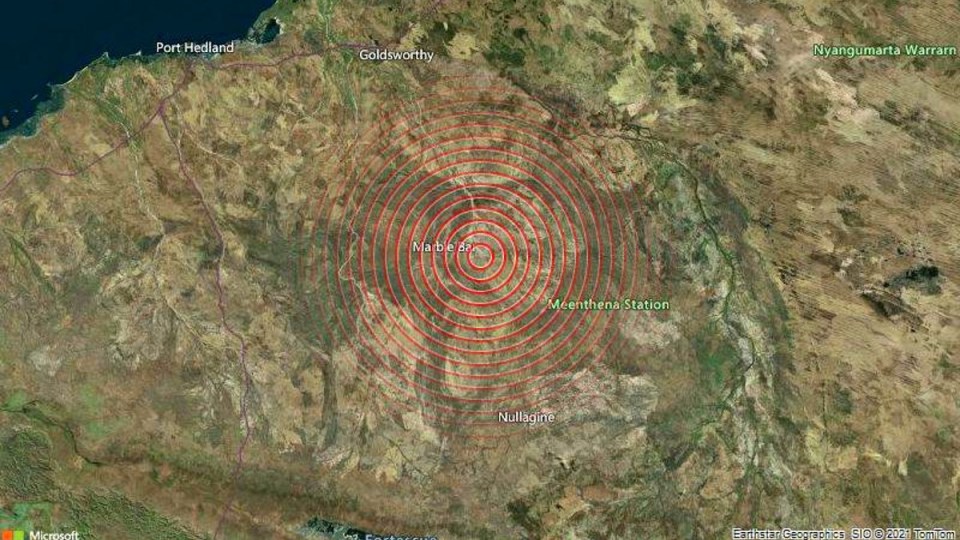 Residents of WA’s Pilbara region, in the state’s north-west, have experienced a surprise earthquake on Saturday night that caused houses to shake and rattle.

Geoscience Australia says the magnitude 5.3 earthquake struck near the town of Marble Bar at 9.05pm local time, followed by several apparent aftershocks of magnitude 2.6, 3.1 and 3.2 within two hours.

Seismologists said the tremor, at a shallow depth of 10km, had been reported as being felt in Port Hedland and Karratha.

The Joint Australian Tsunami Warning Centre said there was no risk of a tsunami to the Australian mainland or surrounding islands or territories from the earthquake.

“It was the biggest quake I’ve ever felt, so it was pretty reasonable,” he said.

“All the spirit bottles in the back bar were rocking.

“It was quite large, it went on a while.”

Did you feel the earth move in the Pilbara, WA? Geoscience Australia recorded a 5.4 magnitude earthquake at 9.05pm local time. More than 900 felt reports have already been lodged. If you felt this earthquake too, fill out a felt report 👉 https://t.co/5jDWA7COuu pic.twitter.com/7qeVc4OWZr

It’s not uncommon for WA to experience earthquakes, with 23 recorded since 2000 that were magnitude 5.0 or higher.

The Volcano Discovery website said the latest quake would have been widely felt by people living in the area of the epicentre.

“Weak shaking might have been felt in Nullagine (pop. 2,600) located 49 miles from the epicentre.”

The earthquake was considered “shallow” which Volcano Discovery’s site explained would be felt more strongly than deeper ones.

“The exact magnitude, epicentre, and depth of the quake might be revised within the next few hours or minutes as seismologists review data and refine their calculations, or as other agencies issue their report.”

In September, Victoria was rocked by its largest earthquake in history — a 5.9 magnitude event with an epicentre near Mansfield in the state’s north-east that was felt across Melbourne and as far away as Canberra, Sydney and Adelaide.

Paul Bongiorno: It won’t be easy for Anthony Albanese, but he says he’s up for it
‘Deeply sorry’: COP26 summit reaches final agreement with last-minute change on coal
Today's Stories

Rumble in the night as magnitude 5.3 earthquake strikes near regional WA towns