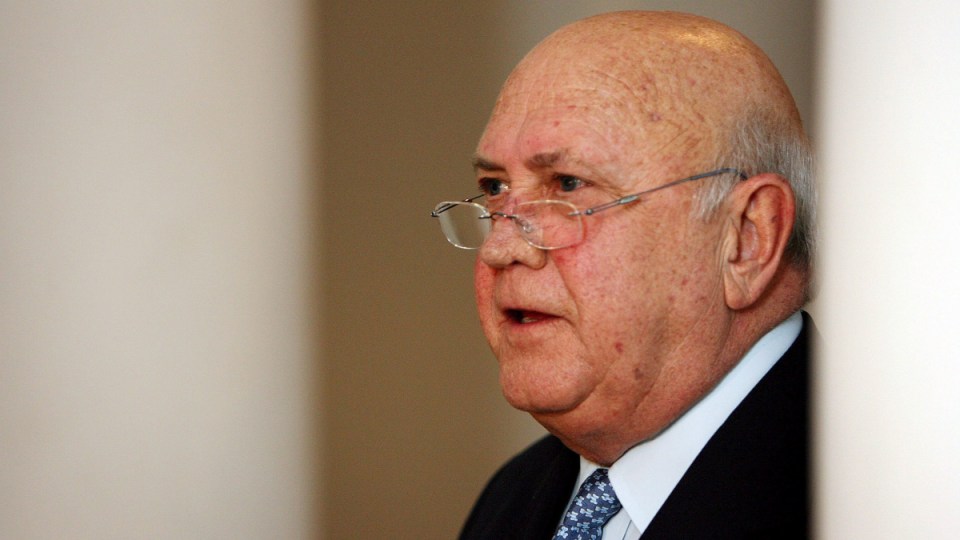 He was feted globally for his role in scrapping apartheid and shared the Nobel peace prize with Mr Mandela in 1993.

But Mr de Klerk’s role in the transition to democracy remains highly contested more than 20 years after the end of apartheid.

Many blacks were angered by his failure to curb political violence in the turbulent years leading up to the 1994 multiracial elections, while right-wing white Afrikaners, who had long ruled the country under Mr de Klerk’s National Party, viewed him as a traitor to their cause of white supremacy.

He shared the Nobel prize with Mr Mandela, but his role in the transition to democracy remains highly contested more than 20 years after the end of apartheid.

Mr de Klerk was diagnosed in March with mesothelioma, a cancer that affects the tissue lining the lungs.

“He is survived by his wife Elita, his children Jan and Susan and his grandchildren,” the foundation said, adding that the family would in due course make an announcement regarding funeral arrangements.

Mr De Klerk, who had been treated for a lung ailment called pneumothorax in 2018, stirred up anger in 2020 when he told a national broadcaster that he did not believe apartheid was a crime against humanity, as declared by the United Nations.