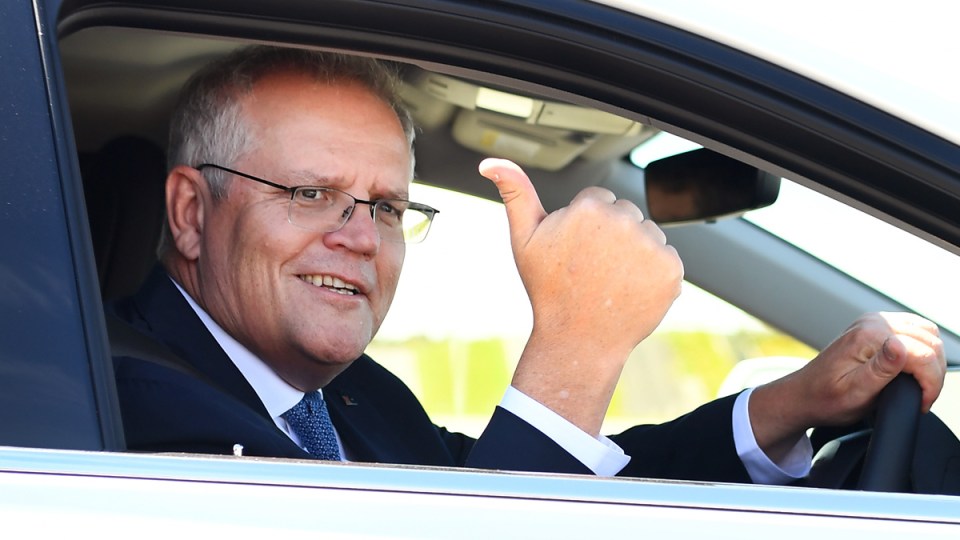 Scott Morrison spent the week talking up his government’s net-zero plan and climate credentials, in a carefully arranged set of photo opportunities and announcements meant to unofficially start the election season.

But escalating attempts to sweep his former criticism of electric cars under the rug led to a series of extraordinary political standoffs, with the Prime Minister accusing Labor of wanting to increase petrol prices – something it didn’t propose – and spreading “lies” about his own position.

Labor’s gloves came off in response, with senior shadow ministers calling the PM a “liar” and backbenchers branding him a “bulls–t artist”.

The federal election could be months away. But with only the first (unofficial) week of the campaign down, the PM is already being accused by opponents of stretching the truth.

So what is the truth?

Claim: Labor wanted to ‘put up the price of fuel’

In Sunrise and Today interviews on Thursday, Mr Morrison claimed Labor’s electric vehicles policy aimed to “put up the cost of fuel to try and force people to switch over”.

Labor vehemently denied this, saying its policy would do no such thing.

“A lie so ridiculous that he did not even say it amongst the quagmire of dishonesty that was his 2019 election campaign,” said Mr Bowen, blasting it as a “misinformation campaign”.

Mr Morrison did raise claims in 2019 that Labor’s EV policy would affect fuel prices – demanding several times that the Opposition explain “the impact on petrol and diesel excise revenue”.

But better fuel standards would lead to even larger savings on petrol, according to a 2019 report from the Department of Infrastructure.

Mr Bowen on Thursday pointed out petrol costs were already rising in Australia, claiming it “has been at nearly $2 a litre for almost a month”.

Claim: Labor had an EV ‘mandate’

It was not a binding mandate.

Despite Mr Morrison’s criticism of that position, the NSW Liberal government released an almost identical state policy on Wednesday – just a day after the federal announcement.

NSW Treasurer Matt Kean said his state was on track for half of all new car sales by 2030 to be electric, exactly the same number as Labor’s 2019 target.

The federal government’s projection is at least 30 per cent of new car sales by 2030 will be EVs.

Asked on Tuesday about his prior comments, Mr Morrison branded it a “Labor lie” that he had campaigned against electric vehicles in 2019.

“I was against Bill Shorten’s mandate policy, trying to tell people what to do with their lives, what cars they were supposed to drive,” he said.

It is true that much of Mr Morrison’s criticism in 2019 was directly related to Labor’s policy, claiming it would reduce consumer choice.

Mr Morrison also spoke in favour of EVs, saying they “have a role to play” and that he had “no problem” with them.

However, several of Mr Morrison’s 2019 criticisms appeared to be directly on the concept of EVs, not just Labor’s policy.

Mr Morrison also claimed in 2019 that Australians prefer cars “that have a bit of grunt, have a bit of power” – insinuating electric vehicles lack those.

Mr Albanese accused the government of trying to “wipe out history and what they’ve said and what they haven’t done for nine long years”.

“[Mr Morrison] is prepared to say anything at all and hope that people don’t hold him to account for what he said yesterday,” he said.

On Today, the PM alleged the Labor leader “backed in the Chinese government and a number of others in having a crack at me”, when asked about French President Emmanuel Macron’s claim that Mr Morrison had lied to him.

He did not detail what he meant. News.com.au reported government sources saying it was a reference to Labor calling for an inquiry into the AUKUS plan.

Mr Albanese has publicly backed AUKUS, despite heavily criticising the government’s handling of the situation with France.

However, Opposition MPs including Kim Carr have raised larger reservations, including about shipbuilding capacity, cost and what the pact means for Australia’s foreign policy options.

Mr Morrison has previously shrugged off questions about the AUKUS pact being aimed at countering China.

Asked in a September 2GB interview whether the nuclear submarine plan was specifically aimed at China, the PM said he’d “seen all that commentary” but that “all I know is that we’re doing this to ensure that our region is stable”.

How did Labor respond?

Labor has questioned Mr Morrison’s truthfulness and integrity for some time, aiming to build an election campaign on trust and authenticity.

The Opposition has continually claimed Mr Morrison’s government doesn’t follow through on its promises.

But recent days have seen that rhetoric sharpen significantly.

On Sunday, Mr Bowen accused the PM of “fundamental dishonesty” and claimed “we know Scott Morrison’s a liar”.

Other senior Labor sources described the comments as “another Morrison lie” and a “smear”.