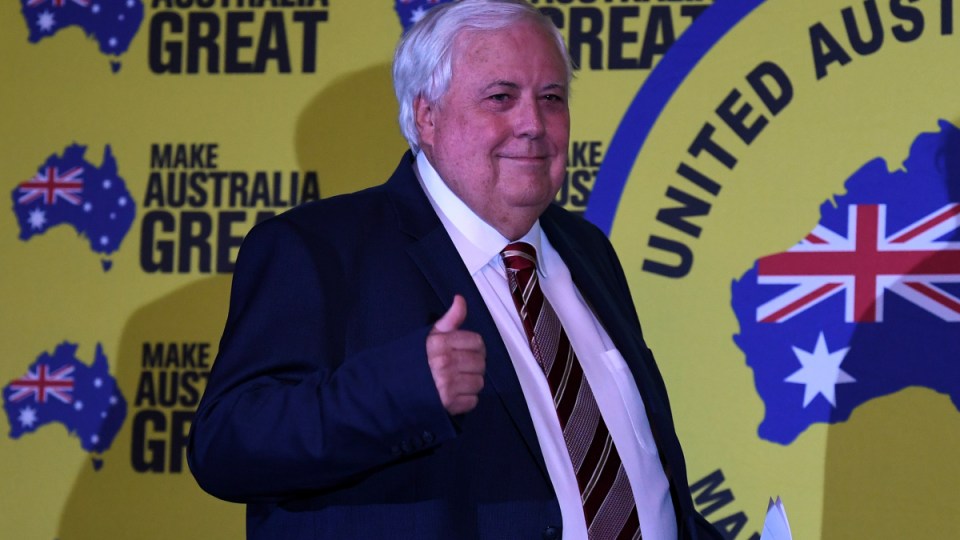 Clive Palmer's UAP is spending millions on YouTube and other ads. Photo: AAP

Campaign experts claim it’s a “waste” to spend so much cash at this stage, but UAP leader Craig Kelly claims the party will far exceed its disappointing 2019 poll results – and the major parties are worried, with ads already reaching millions of people.

“It’s unlikely these individual messages are moving many voters from one party to another, but it shapes the agenda of what is being discussed and salient in the minds of voters,” said Dr Glenn Kefford, lecturer in political science at the University of Queensland.

“It can have an indirect effect on changing the campaign environment. It can change how voters decide which issues are most important.”

Mr Palmer spent an estimated $60 million on UAP advertising at the 2019 poll, much of it explicitly critical of Labor and then-leader Bill Shorten.

The UAP failed to win a single seat, scoring just 3.43 per cent of the national vote, but Mr Palmer claimed his campaign helped the Coalition retain power.

The mining magnate claimed he “decided to polarise the electorate” with the ads, to influence public opinion against Labor.

The Opposition’s election review said Mr Palmer’s campaign had “a significant negative effect” on their vote and “crowded out Labor’s advertising”.

The next federal election is tipped for March or May – between four and six months away. But new data from Facebook and Google show the UAP has already kicked its ad campaign into high gear, spending millions on blanket coverage across social media.

The next highest single advertiser was the Australian Labor Party national secretariat, which spent $57,000.

The UAP launched a staggering YouTube ad blitz in late October, spending nearly $1.3 million in two weeks from October 24, on a series of ads.

Among them were ads critical of the government’s net-zero policy, promoting fast rail, and a parliamentary speech from Mr Kelly where he raised concerns about COVID-19 vaccines.

Two ads were removed after having “violated Google’s Advertising Policies”.

Google does not share an exact number of how many people saw each ad, but the transparency report says each one was seen by between one million and 10 million people.

Facebook’s transparency reports reveal the UAP spent $161,000 on advertising in the past three months.

The Australian Labor Party spent $107,000 on ads from its main national page, while the Liberal Party of Australia spent $42,000.

These figures are in addition to spending on front-page newspaper ads, billboards, television and radio ads, and spam text messages that have been running for months.

Mr Kelly, who quit the government and joined the UAP in August, claimed Mr Palmer planned to spend at least as much in 2022 as he did in 2019.

UAP ‘running our own media’: Kelly

A spokesperson said the UAP’s “strategy and spend at this stage is confidential” but pledged to “lodge our expenditure with the [Australian Electoral Commission] at the appropriate time.”

But Mr Kelly said the UAP had been forced into blanket advertising as he claimed media outlets were “reluctant to cover us”.

“They’ve tried to cut us off. We’ve had to counteract that by running our own media,” he told TND.

“The major parties have millions in taxpayer funding, so the only way we can compete against that is to have very substantial external funding.”

Mr Kelly said the UAP would run in all 151 lower house seats and stand for the Senate in every state.

However, with the party’s recent pivot to anti-lockdown policies, Mr Kelly said the party would have a focus on areas of western Melbourne and Sydney that have experienced particularly tough lockdown orders.

“This is a completely different election. We’ll be running a more decentralised campaign,” he claimed.

Labor sources claimed Mr Palmer’s 2019 campaign pushed up advertising prices and gobbled up valuable airtime, and have concerns this could be repeated in 2022.

Tom Sear, an online security and disinformation expert at UNSW Cyber at the Australian Defence Force Academy, said this was a strategy often used in cyber warfare.

He studied social media manipulation at the 2019 poll, and said it could be repeated next year.

“[UAP] bought every resource they could. From a marketing perspective, it does have an influence,” he told TND.

Despite widespread public annoyance at UAP ads and texts, Mr Sear said simply getting in front of people’s eyeballs was sometimes enough to influence minds – even if people deleted a text or skipped an ad.

“You only need five seconds, even if people click off. That’s the dirty secret of online advertising – that it has an impact,” he said.

Dr Kefford said the type of advertising UAP puts out is unlikely to directly encourage rusted-on voters to switch from one party to another.

But he said that repetitive advertising emphasising certain topics – the economy, taxes, social measures – could subliminally make people consider that topic more deeply, and therefore influence how they make their final decision.

But he also added there was a reason why the major parties were nowhere near the UAP’s social spending.

“Spending millions on YouTube this far out from an election is a waste,” Dr Kefford said.

“It’s bizarre from a campaign strategy point of view.

“Professional campaigners would say they’re wasting their money … it’s very unlikely they’re having a significant effect on voters, spending that money on YouTube.”