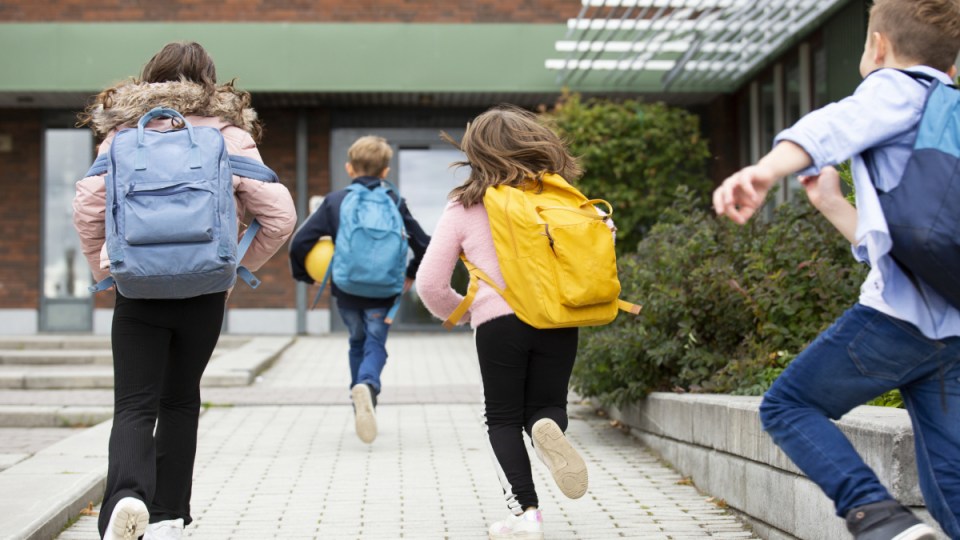 Getting kids back in school is a "national priority". Photo: Getty

Schools should give students daily COVID tests instead of shutting classrooms in an outbreak, and close contacts could quarantine for just a week, under Doherty Institute recommendations.

“Allowing ongoing school attendance for class contacts of a case through a ‘test to stay’ strategy achieves equivalent outbreak containment to home quarantine,” the Doherty Institute said in its latest round of modelling to national cabinet.

“Regular screening of students in areas at risk of outbreaks can result in even fewer infections and in-person teaching days lost.”

As Australia’s double vaccination rate hits 80.6 per cent of the 16-and-over population and COVID rules are eased, attention is turning to long-term strategies on dealing with virus outbreaks.

Federal medical regulators approved vaccinations for the 12 to 15 age group in August, with 52.6 per cent of that cohort already double vaccinated.

However, children under 12 still aren’t eligible for vaccination.

The Doherty Institute, which worked on virus and vaccination modelling underpinning Australia’s national reopening plan, presented its final tranche of data to national cabinet on Friday.

The data said that, with Australia’s high vaccine rate, vaccinated people would begin to make up half of future COVID infections.

However, vaccinated people would have milder symptoms and be less infectious than the unvaccinated.

Doherty’s modelling said governments could consider more “simplified” management of exposures and close contacts for people who were vaccinated, but warned that keeping forms of test, trace, isolate and quarantine (TTIQ) was “critical”.

As part of the modelling, Doherty and the Burnet Institute also looked at schools, considering how to balance unvaccinated children in an environment where sickness can easily transmit, while also keeping kids in the classroom safe as much as possible.

The experts noted children were generally less likely to transmit or contract COVID, even before vaccination.

The modelling forecast that in nearly half of cases where an infectious case entered a school, it would not lead to any COVID cases, let alone a wider outbreak.

But despite some schools considering quarantining entire classrooms if one student tests positive, Doherty’s modelling suggests the classmates could instead undergo daily rapid antigen tests (RATs) instead of having to stay home and miss lessons.

“Daily rapid antigen testing of contacts, with exclusion only if positive, is as effective for outbreak prevention as 14-day contact quarantine,” Doherty said.

“By detecting cases faster, there are fewer infections present when the first diagnosis is made and a lower risk of larger outbreaks occurring.”

In primary schools, forcing all classmates to quarantine following an infected child would see students miss more than four times as many school days as the ‘test to stay’ approach.

Keeping kids in classrooms, instead of stuck at home doing online learning, was identified as a “national priority”, Doherty said.

Doherty experts did not recommend a specific RAT kit to use, or give guidance on exactly how the ‘test and stay’ system could practically work, saying that was not their area to give such advice.

In a press conference, experts stressed there was still “further work” to be done on such practicalities, noting their modelling simply showed it could be a possibility to explore.

Australia’s Therapeutic Goods Administration is currently considering an application from Pfizer to give its vaccine to children aged five to 11.

Currently, the United States is the only country in the world to have approved a COVID vaccine for such young children.

Mr Morrison said Australia wouldn’t begin those jabs until the TGA and the Technical Advisory Group on Immunisation (ATAGI) both approved, saying the regulators “have not yet formed a medical opinion that that should proceed at this point”.

“We’ve also been advised by the chief medical officer that the incidence of serious disease among younger children with COVID is not the same for the rest of the population, so the risk is different for children aged five to 11 compared with those who are older.”

“The critical thing is a full and thorough assessment. Our kids are far less likely to either get or, in particular, to have serious complications,” he said on Monday.

“Given that lockdowns are being lifted and border restrictions will be lifted as well over coming weeks, Australian parents deserve a clear answer from Scott Morrison – when will my child aged under 12 be able to be vaccinated and protected from COVID?” he said.

For the vaccinated, there was just a one per cent change in transmission potential if they were allowed to isolate at home for just seven days instead of the usual 14, following close contact with an infected case.

“Such a change poses a very low risk,” Doherty said.

Owners and organisers of public events and hospitality have voiced concerns over how such close contacts would be managed, given the higher risk in crowded places.

Several states have already changed such protocols, eliminating the requirement for casual contacts to isolate and dropping the need for international or interstate visitors to isolate on arrival.