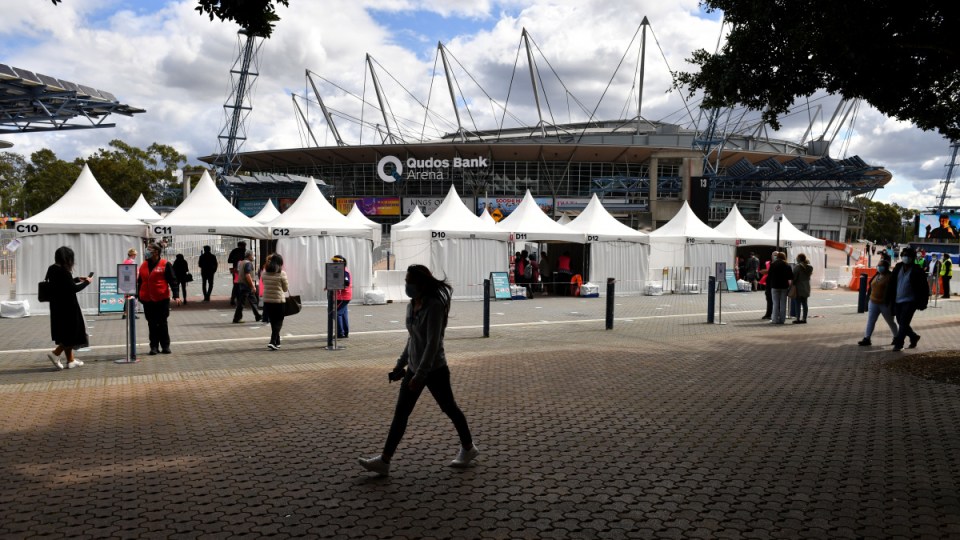 Sydney’s mass COVID-19 vaccination hub at Qudos Bank Arena will be closed, while protesters have gathered across NSW ahead of restrictions further easing.

Premier Dominic Perrottet announced the centre would shut its doors on Sunday, after delivering more than 360,000 vaccine doses since opening on August 9.

The arena will return to hosting sport and entertainment events from Monday.

Mr Perrottet said it was an important milestone in the state’s vaccination program, as it transitions to giving booster shots to adults who received their second jab six months ago.

“It is very clear that this booster program here in our state is going to be critical in order to keep people safe and ensure we can keep New South Wales open,” he told reporters while touring the new Granville Centre vaccination clinic.

The centre in Sydney’s west can deliver up to 1000 vaccine doses a day and will open on Monday, when restrictions ease across the state for vaccinated people.

Under the previously flagged changes, there will be no limit on home visitors and as many as 1000 people can gather outdoors.

Hospitality venue density limits move to one person per two square metres, while stadiums, racecourses, theme parks, zoos, cinemas and theatres can operate at 100 per cent of their fixed-seated capacity.

Unvaccinated NSW residents, however, have to wait until December 15 or when the state reaches a 95 per cent double-vaccination rate to enjoy greater freedoms.

Hundreds of protesters largely dressed in white came together in spots such as Parramatta, the Central Coast, Wollongong and Coolangatta on the Queensland-NSW border as part of “Reclaim The Line” rallies on Sunday, opposing vaccine mandates.

NSW is on the brink of hitting 90 per cent full vaccination of people aged 16 and over, with 89.8 per cent now double-dosed.

Health Minister Brad Hazzard said the closure of Qudos Bank Arena would not lead to a further slowdown of the state’s vaccination rate.

“We’re now in the tougher end of the vaccination (program) … where people who have been reluctant for a variety of reasons are now contemplating whether or not they should be vaccinated,” he said.

It comes as another 244 local COVID-19 cases were reported in NSW along with one death, an unvaccinated man in his 60s from Albury who died at Melbourne’s Box Hill Hospital.

His death brings the state’s toll throughout the pandemic to 593, with 537 of those coming from the current Delta outbreak.

There are 269 patients battling the virus in hospitals across the state, 52 of whom are in intensive care.

COVID-19 continues to spread in regional NSW, with more than half of new infections outside Sydney.

Of the 244 local cases reported to 8pm on Saturday, 77 were detected in the Hunter New England health district, 20 on the mid north coast, 17 in Murrumbidgee and nine in western NSW.

Virus fragments were also detected in samples collected from other regional areas where there are no recent known cases, including Bermagui, Moruya, Young, Gulargambone and Cobar.

Anyone in these areas with symptoms is urged to immediately get tested and isolate until they receive a negative result.