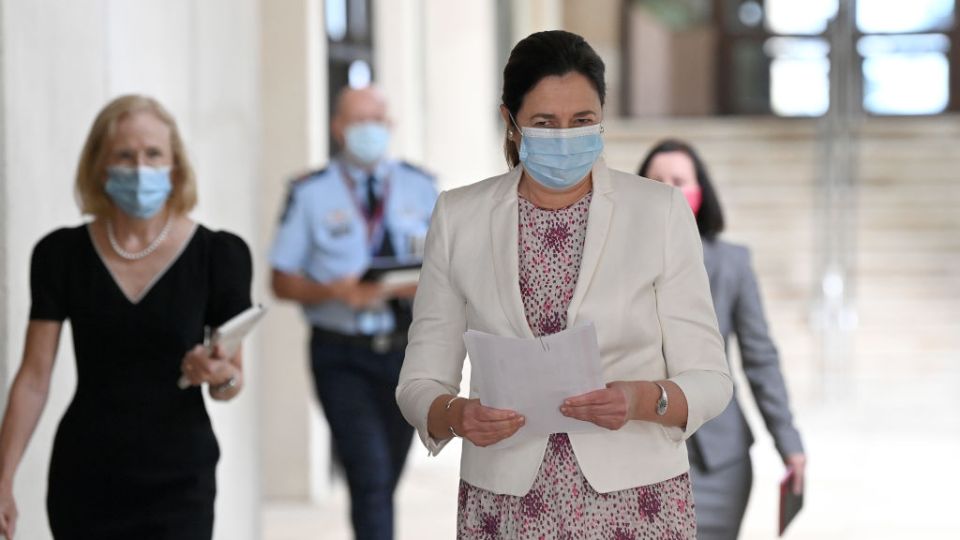 The Queensland Premier is considering restrictions on unvaccinated people among other options as the state prepares to ease restrictions for people fully vaccinated against COVID-19.

Annastacia Palaszczuk said those decisions were up to individual businesses, but public health orders restricting unvaccinated people, such as those in NSW and Victoria, could be issued in future.

“What we will see in the future across Australia may be, until the vaccination levels are consistent across the nation, you will see some measures we’ll put in that only vaccinated people will be able to go to certain venues,” she said on Friday.

“You’re seeing that in New South Wales and Victoria at the moment.

“I don’t want to pre-empt what’s happening in Queensland but you could see businesses do that, you could see large festivals for example saying to young people: ‘You can only come here if you are vaccinated’.

“So it’s in everyone’s interest to get vaccinated.”

Her comments came as the state recorded no new locally acquired cases of COVID-19 on Friday, a day after two women and a teenager, only one of whom had had one jab, were recorded as cases.

They had recently visited the northern NSW town of Moree, where an outbreak has grown to at least 33 cases.

Queensland cut the Moree Plains Shire from its border bubble and will further restrict cross-border travel exemptions to only certain “essential purposes” for the next seven days.

“We will try and get supplies to those communities in NSW rather than having to cross to get supplies into Queensland,” Ms Palaszczuk said.

The Premier said hospital and aged care visitors would be banned from those facilities in Goondiwindi this weekend as well, as a precaution.

The town is unlikely to be locked down due to high vaccination rates, with 90.9 per cent of eligible Goondiwindi residents having had one jab and 81.5 per cent fully vaccinated.

Overall, 66.3 per cent of eligible Queenslanders are fully vaccinated, and 79.1 per cent have had one dose.

However, Indigenous vaccination rates are lagging in the state with 52 per cent of Aboriginal and Torres Strait Island people aged over 16 having had one jab and 38.9 per cent being fully vaccinated.

He called for the government to improve access to vaccines and to go into Indigenous communities to spruik the jab.

“We’ve got to give people the confidence to get the jab and I’ve seen some of the nonsense that’s on social media and it’s running through these Indigenous communities,” he said.