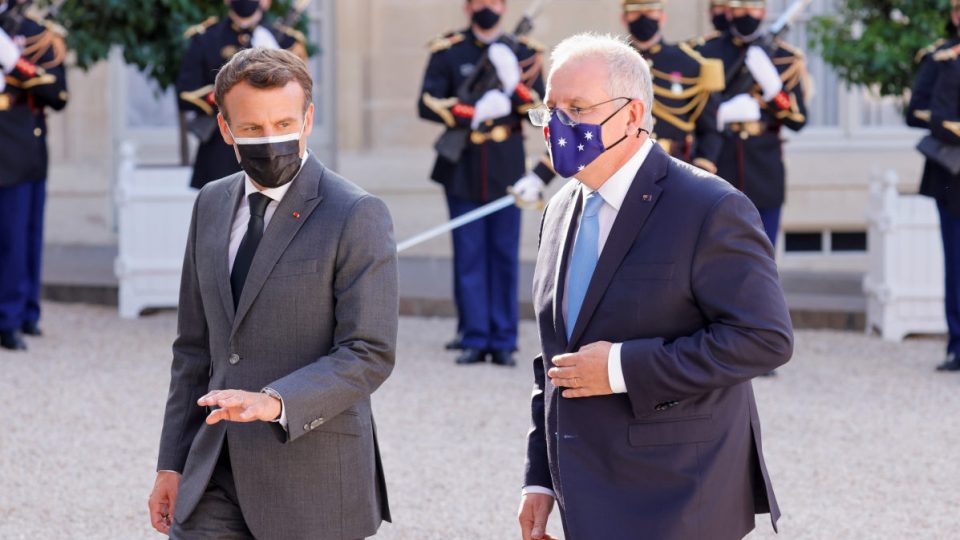 Scott Morrison weighed whether to go to the G20 and COP26.

The political hard heads will be thinking maybe it would have been wiser to have stayed at home.

Important as it is internationally, the Glasgow conference is billed as a harm-minimisation assignment for the Prime Minister. And the G20 wasn’t expected to yield much that was useful for him.

Everyone knew that after the submarine contract cancellation an awkward encounter with France’s Emmanuel Macron was possible at one of these meetings.

But it’s safe to say no one expected the French president would call pants-on-fire when asked about the PM.

Morrison had been claiming the fractured Australian-French relationship was starting to recover, albeit slowly.

He tried to underline the progress by approaching Macron in an off-stage moment at the G20, which was captured by his official photographer.

Morrison later told reporters: “He was having a chat with someone. I went up and just put my arm on his shoulder, I said, G’day Emmanuel and look forward to catching up over the next couple of days.

“And he was happy to exchange those greetings, and we’ve known each other for a while. But you know, it’s just the process of being on the road back.”

But the picture told another story – the look in Macron’s eye was anything but friendly.

Macron was having none of the Morrison spin. When asked a day later by the Australian media whether he thought the PM had lied to him over the cancellation of the submarine contract, he said “I don’t think, I know”.

The French were furious at the time by the sudden announcement of AUKUS and the way the subs contract was quashed, they say without notice.

Although their ambassador is now back in Canberra (and at the National Press Club on Wednesday) the anger obviously remains strong.

In a phone conversation just as Morrison was about to leave for Rome Macron told him it was up to the Australian government “to propose tangible actions” to redefine the bilateral relationship.

Morrison tends to speak of the French rather as if they are children deprived of a valued toy who are naturally “disappointed” but just need time to get over their tantrum.

Admitting error or showing contrition are not part of Morrison’s political repertoire. Instead, when caught or cornered, he denies, spins, blusters, changes the subject.

The French President’s forthrightness has made these tactics more difficult to deploy. But Morrison always has excuses.

Macron blindsided? The PM argues the president should have realised, from their mid-year conversation in Paris, that the contract was likely to become history.

“I was very clear that what was going to be provided to us was not going to meet our strategic interests,” he said at the weekend.

Did he indicate he’d break the submarine deal? No, but, “We all understood what the gates in the contract were and what then needed to be decided.”

The French kept in the dark about the Australian move to new partners and nuclear subs? Morrison says they couldn’t be brought into the secrecy surrounding AUKUS.

Joe Biden (who has again apologised to Macron for the lack of communication) saying he hadn’t known the French weren’t in the loop much earlier? Apparently all the fault of the US officials not passing information up to the president.

Morrison denied Macron’s claim he’d lied – “it’s not true” – and defaulted to his line that “I’ll always stand up for Australia’s interests”.

The French will be further riled by the intervention by acting PM Barnaby Joyce, who tried to minimise the whole affair.

Asked whether things could have been handled better, Joyce said, “With hindsight – you know tomorrow the Melbourne Cup’s on? If only I could put a bet on last year’s one, geez, I’d make some money.”

Another line the government is running is that the French have an election coming up. Defence Minister Peter Dutton raised this last week. Whether or not this is a factor in Macron’s reaction, it just adds to the diplomatic rift to pull out that card.

On Monday in Glasgow, Morrison hit back hard, in effect casting Macron’s attack as one against Australia. Morrison declared he personally had broad shoulders but “I’m not going to cop sledging on Australia”.

The government also briefed out details of the days immediately before the announcement of the contract’s end.

Knowing or suspecting what was coming, Macron declined to take a call from Morrison, who intended to inform him personally of the decision.

He sent a message saying, “Should I expect good or bad news for our joint submarines ambitions?”

How much will all this matter politically for Morrison?

Internationally, it is very bad for his reputation and that of Australia.

And indirectly, it has brought back questions about the AUKUS submarine deal, which will deliver no boats until about 2040, which is increasingly looking a very concerning time frame.

Domestically, Labor has seized on the liar line to reinforce its argument that Morrison misleads and worse.

Morrison surely will (and should) be embarrassed by what’s happened. But he’ll be more intent on asking what the voters think, and he’ll probably be reckoning that on the home front he can neutralise Macron’s allegation.

And that’s by invoking “national interest”, which sits besides “national security.

“I’m not going to put that [relationship with France] interest higher than Australia’s national interest, and I don’t think any Australian would expect me […] to surrender that interest for the sake of another,” he said.

He’ll be betting that in the focus groups, while this might be seen as fresh government untidiness, they won’t be on Macron’s side.

And that’s where Morrison’s attention is centred, as he currently looks at everything through next year’s election prism.

View from The Hill: How will Macron’s ‘pants on fire’ claim about Morrison play in focus groups?