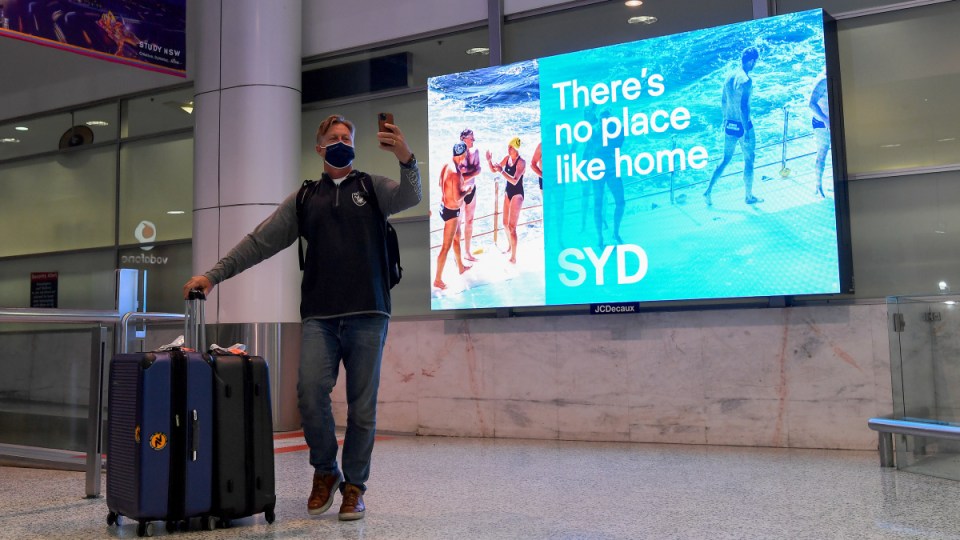 A returning traveller arriving on one of the first quarantine-free international flights takes a selfie at Sydney International Airport. Photo: AAP

Treasurer Josh Frydenberg has refused to rule out closing Australia’s international borders in the future should the coronavirus pandemic take a turn for the worse.

Almost 600 days after Australia’s borders were slammed shut, Sydney airport was inundated with international arrivals on Monday, as caps and quarantine requirements lifted.

In heartwarming scenes, hundreds of returning Australians landed in Sydney to be greeted with tears, hugs and Tim Tams from loved ones.

Mr Frydenberg was asked to reassure Sunrise viewers the borders would remain open as Australians begin to travel and reunite with their loved ones.

“Well, I cannot guarantee anything because we are living in a once-in-a-century pandemic,” Mr Frydenberg said.

“But what I can tell you is that the vaccinations are our best defence and that is what has been proven by the fact that in New South Wales we have seen case numbers come down and we have seen vaccination rates go up.”

Initial flights have been limited to Australian citizens, permanent residents and their immediate families and parents.

Qantas is operating flights between Sydney and London and Los Angeles, with flights to other destinations to come.

“We are back in the air earlier than anticipated, thanks to the millions of people who turned out in droves to get vaccinated,” CEO Alan Joyce said.

Qantas flight QF1 from Sydney to London will be one of the first to depart at 6.30pm carrying outbound vaccinated Australians.

Home Affairs Minister Karen Andrews later told Sunrise while there were no guarantees, she was “very confident” the borders would stay open – as long as vaccination rates remain high.

The comments come as the tourism industry hopes for a bumper summer, with reunions sparked by borders lifting.

Tourism & Transport Forum CEO Margy Osmond said Monday would be remembered as “the day Australian tourism began the long march back to recovery”.

“However, as many states are still closed to each other – the tourism recovery will remain patchy and piecemeal for many months to come”, she said.

Mr Frydenberg said it was “absurd” that international arrivals could enter NSW and Victoria without quarantine, but domestic travellers still face restrictions.

“How absurd is it that someone can travel to Singapore but they can’t travel to Cairns?” Mr Frydenberg told Sky News Australia on Monday.

He said the federal government would pile pressure on states that have not yet opened their borders.

“We want to see those borders open, we will continue to put the pressure on,” he said.

“It’s really pleasing that in NSW and in Victoria they’ve removed the need for hotel quarantine if you’re double vaccinated and you’re an Australian resident or citizen travelling internationally.”

Restrictions on travel around NSW for fully vaccinated residents was removed on Monday, as well as capacity limits for hospitality venues.

Business NSW CEO Daniel Hunter said confidence had suffered a hit in the last quarter, but business owners were optimistic about recovery.

More than half of businesses said they would not have survived without government support, but 41 per cent said they were ready to “snap back” as soon as restrictions were lifted.

“With regional travel now allowed in NSW, that figure will be growing as we count down to Christmas,” Mr Hunter said.

Reopening has put the need for skilled migration back in the spotlight as industries like hospitality, tourism and agriculture desperately hunt for workers.

The government predicts the return of regional tourism, with business confidence expected to soar as pent-up demand prompts travellers to book holidays.

More than 80 per cent of regional local government areas are now double vaccinated.

NSW Premier Dominic Perrottet said the state’s high vaccination rates had paved the way for a safe reopening and flagged that health authorities now believe it’s possible to get 95 per cent of the state fully jabbed.

The state’s vaccine booster program has also opened to adults who received their second jab six months ago.

Meanwhile, the daily tally of COVID-19 cases continues to decline with 135 new local cases – 42 fewer than the previous day – and four deaths recorded in the 24 hours to 8pm on Sunday.

There are 349 COVID patients in hospital, with 77 people in intensive care, 33 of whom are ventilated.