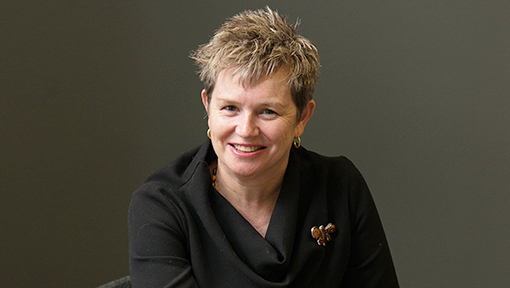 Margaret Hellard has thick skin. You have to when you work with prisoners while researching infectious diseases.

You have to when News Corp commentators like Andrew Bolt are calling the COVID-19 modelling that scientists like you work on “trash”.

Sure, take a microscope to Professor Hellard’s work – the professor of epidemiology and director of the Burnet Institute won’t back away from meaningful debate.

That was not a danger the scientist was expecting to face while helping Australians out of the coronavirus pandemic.

“You have these sort of things where somebody feels like they can say your work is crap or this or that,” Professor Hellard said.

“Then every now and then you have one where (they say) ‘and I would like you to die or your family members to die or for you to fall off a cliff, or something evil to happen to you’ … that can be really horrible.”

Police have launched an investigation into one particular email, in which Professor Hellard’s life and family was threatened.

She is one of many scientists victimised by what the Director of News and Partnerships at the Australian Science Media Centre (AusSMC), Lyndal Byford, has labelled “pandemic levels of abuse”.

A survey by AusSMC found that 31 of 50 Australian scientists who have recently spoken publicly about research into COVID-19 had subsequently been harassed. Ten of the researchers had received threats of rape or murder.

Another survey, conducted by science journal Nature, found a high proportion of negative experiences among scientists across the UK, Germany, Canada, Taiwan and New Zealand, with 15 per cent reporting death threats and 22 per cent saying they received threats of physical or sexual violence.

Scientists didn’t sign up to become celebrities, yet such is life in these “unprecedented” times – for evidence of that, just think of the public adoration for Chief Health Officer Brett Sutton, whose fans joked about the “unbutton for Sutton” movement and even had his face printed on underwear.

Some locked-down Australians needed to find a villain, as did opposing politicians.

Of course, nastiness directed at those informing policy is not new – before the era of digital news, comments were vetted by the moderators of the Letters to the Editor pages. News publishers are also now legally responsible for the comments they publish at the bottom of online stories – and, since a High Court ruling earlier this year, for what people write on their company Facebook pages.

Professor Anne Kavanagh, Chair of Disability and Health at the University of Melbourne, recalls the response to an opinion piece she penned for The Australian after Pauline Hanson told Parliament children with autism shouldn’t be in mainstream schools:

“The toxic comments made about me were so bad that The Australian had to turn off the comments, something they rarely, if ever, do. I stopped reading them because I honestly felt like folk did not want people like me or my son in the world.”

“I’ve been trolled, verbally abused, received death threats and, most recently, had threatening material sent to my home,” said Professor Dale Dominey-Howes, Professor of Hazard and Disaster Risk Sciences at the University of Sydney.

“And, frankly, as a white man, I’m far luckier than some of my colleagues, who receive orders of magnitude more hate than I do,” he said.

It’s not just anonymous keyboard warriors behind the abuse – the “pile on” Professor Hellard has described is fuelled by some colleagues in a manner infectious diseases expert Professor Raina MacIntyre likened to “bullies and stalkers”.

“I have had some extraordinary personal attacks against me in media pieces,” Professor McIntyre said.

“The saddest, however, is trolling by doctors, other health professionals and academics.

“Some may be driven by an agenda, but others just seem to have been broken by the pandemic, lost their bearings and sense of professionalism.

“I was shocked to see a colleague who I have worked with and known has become a well-known troll, and unrecognisable from the professional I used to know.”

Professor Hellard said researchers who were firing off misleading tweets were damaging health messaging – and that confusion is potentially fuelling anti-vaxxers.

Some professionals were more interested in attempting a witty one-liner than assisting the public to understand health advice, she said.

Have they even read the full scientific paper before tweeting? Maybe not.

“You may feel like you are too busy with your five-word tweet but then think about it because it is the equivalent of winding the window down, driving past somebody and shouting out to them that you don’t like their clothes,” Professor Hellard said.

With over 500 research papers, leading positions at universities, the Alfred hospital and the Burnet Institute, Professor Hellard can feel confident in her work.

But she worries these “drive-by” attacks will deter younger researchers from engaging with the public, publishing new research or speaking up to combat misinformation.

So the professor went to the police not so much because she was afraid for herself, but because of the danger harassment poses to the future of science.

“I decided to make a stand on behalf of the younger female researchers,” she said.

She added: “It is a very intimidating thing when other people – be it another professional or non professional – pile on to your work … that is an entirely inappropriate way to have a conversation about that piece of work which has been peer-reviewed.”

It’s up to all of us

This weekend, Prime Minister Scott Morrison will be in Italy, where he plans to draw G20 leaders’ attention to the need for social media giants to be more accountable for what they publish.

The PM said on Thursday that he would push for greater safeguards for users of sites like Facebook and Twitter, which he described as life-destroying “weapons”.

Victoria Police has followed up her case – but there was no formal legal action taken against the person who made the threats because the individual had moved out of Australia and is now living abroad.

“There needs to be a conversation amongst people generally about how we talk to each other on social media,” Professor Hellard said.

“From a cultural point of view we need to decide it’s unacceptable, but also from a legislative point of view.