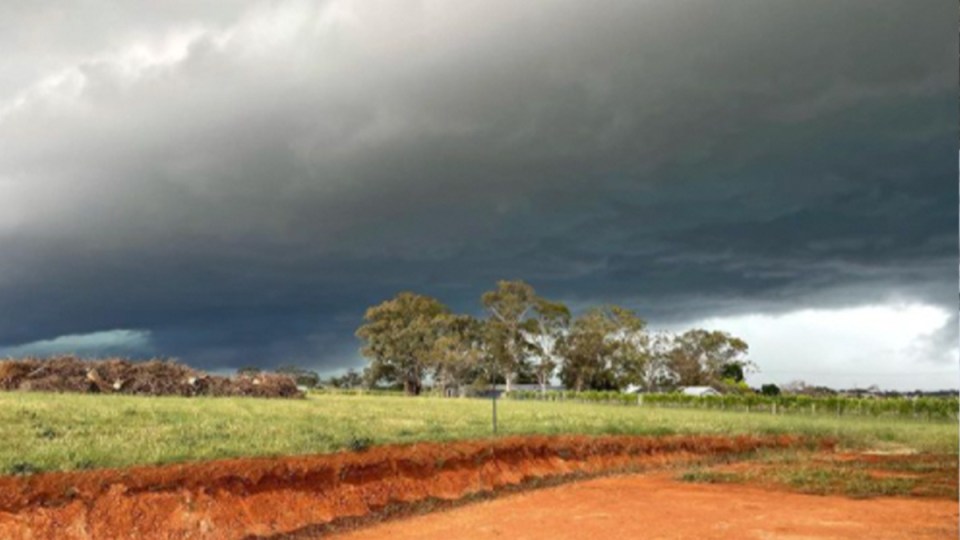 The storm has changed the 2022 harvest for the Barossa Valley. Photo: Facebook/Tomfoolerywines

Nearly 8000 households and businesses remain blacked out and nine schools have been closed after a storm lashed Adelaide and much of the state, leaving a trail of damage across properties, crops and vineyards.

The Bureau of Meteorology said maximum winds of 107 km/h were recorded at Mount Crawford about 8pm on Thursday, with the Mount Lofty Ranges locality taking on 20.4 millimetres of rain in the 24 hours to 9am Friday.

In the metropolitan area, Adelaide Airport recorded winds of 96 km/h while Edinburgh recorded gusts of up to 95km/h.

The storm left more than 12,000 people without power, with SA Power Networks since restoring electricity to around 4000 people.

The Department of Education said nine schools had been closed on Friday as a result of storm damage.

Three of the schools are in Waikerie while Blanchetown Primary School, Birdwood High School, Lake Windemere School and Salisbury High School were also shuttered due to power outages.

The State Emergency Service said it fielded 1213 calls for assistance on Thursday and a further 125 on Friday morning.

“The majority of that has been around the Salisbury area,” SES state duty officer Brenton Clarke said on Friday.

“Yesterday there was more than 760 requests for assistance out in Salisbury alone and there’s more requests out there today.”

Mr Clarke said most of the damage was associated with the hailstorm on Thursday.

“Most of the jobs … have been generally damage from the hail storms, damaged roofs, skylights and obviously then leaking roofs with the water from the rain,” he said.

“Then early evening we had that second front come through and then there was more tree branches broken, essentially falling trees on powerlines, homes, some structure and cars.

“There was some rain with the storm that went over Salisbury and prior to that in the Barossa area where they had some flooding.”

Mr Clarke said while the terrain was easy enough for crews to access, call-out jobs were taking longer due to risks associated with working on roofs.

“That actually just takes a bit longer for a task to be undertaken and completed because of the safety systems that need to be set up as well.

“There’s just a lot more work at an individual house, so for the crews, the kind of jobs they are getting – they’re taking longer to do.

“And of course with the number of jobs we’ve had it slows thing up and sort of impacts the way we can get through the jobs.

“We get a number of calls very quickly, but there’s only limited crews.”

Mr Clarke said conditions were beginning to ease but there was “still quite a lot of clean-up to occur”.

“Take some caution as you work around your home or you’re driving on roads,” he said.

“The message as well is – just to have some patience as we do work through [these jobs].”

Primary producers were also tallying damage to their crops, with some growers estimating their own costs in the hundreds of thousands of dollars.

The SA Produce Market’s Penny Reidy said the storm’s impact on primary growers depended on the line of produce being grown.

“It’s a real mix … things like the apple and pear growers that have got netting in place …. the netting has caught it and saved their crops,” she told ABC Radio.

“There are going to be some apple and pears that have been hit but we won’t know the damage until the picking season which won’t be until February next year.

“We’ve got glasshouses that have been instantly smashed and you can see the damage straight away, so tomato crops have been quite heavily affected.

“Then you’ve got the outdoor crops as well that are grown in big fields, obviously there are going to be heavily affected.

“You really feel for them, there’s a lot of devastated growers at the market this morning.”

Tenafeate Creek Wines owner Larry Costa, whose One Tree Hill establishment was the centre of the state’s last COVID-19 lockdown, estimated that his winery has now lost 80 per cent of its grapes.

“It’s quite devastating,” he told ABC Radio on Friday morning.

“There’s not much fruit left on the vines that’s for sure.”

“We have many small hardworking growers, who will sadly being doing it very tough now, and not just through lost revenue, but also heartbreaking, clean-up costs,” he said.

“For example, Mr Ajith Srikanthan, who has a 1.5-hectare zucchini farm in Penfield, estimates that his crop losses will exceed $60,000. That’s a big financial hit for small grower.

“I understand that Regional Skills Training, which has over 700 grower and worker students across the region, is being inundated with calls for assistance.

“Any assistance from the Government and local councils would be greatly appreciated.”

This article was first published in InDaily and is republished here with permission.

CT scans in Australia put on hold because of COVID-19 lockdown in China
‘Supercell thunderstorms’ head north, as Victoria mops up
Today's Stories